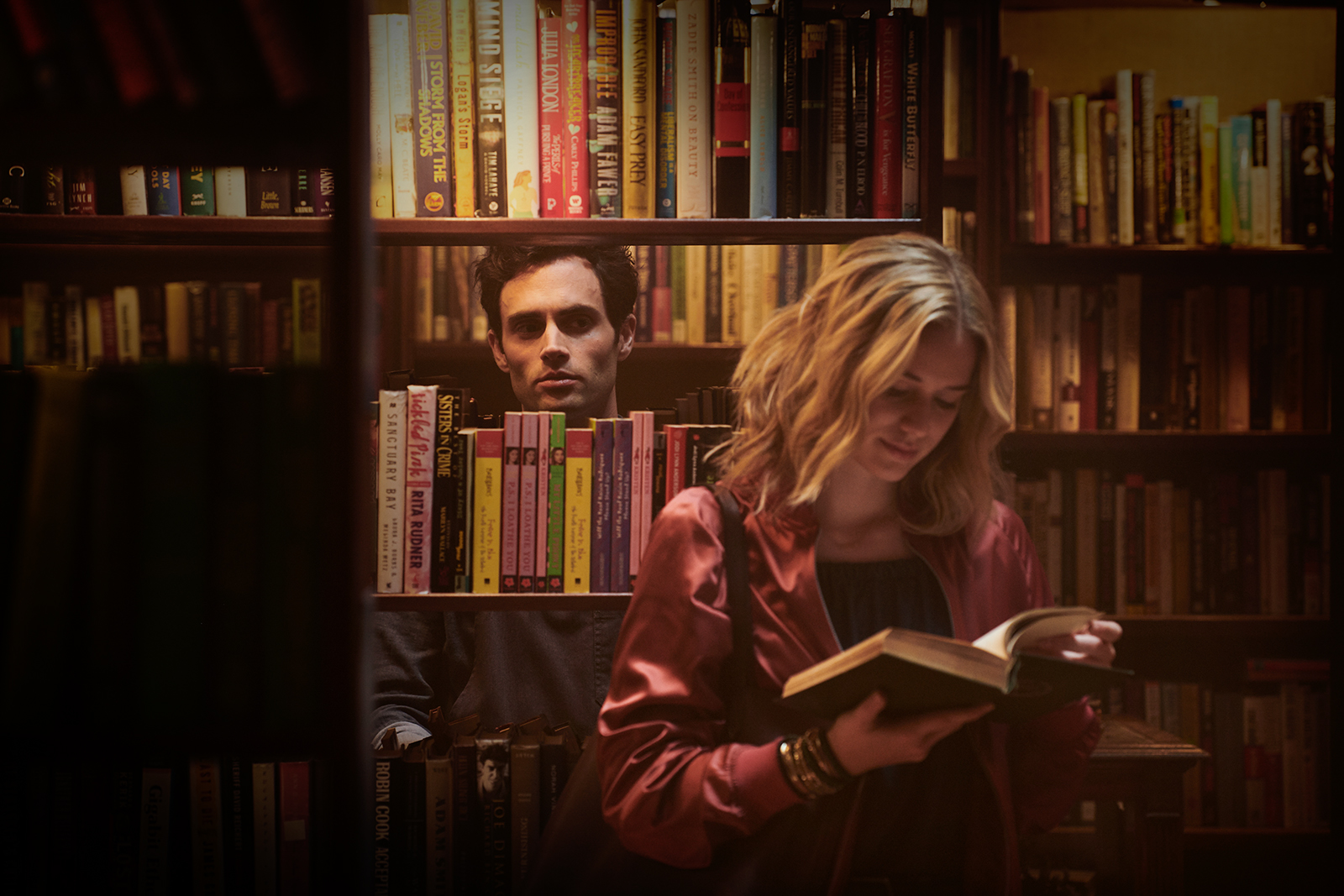 On the Netflix series “YOU,” Joe Goldberg (Penn Badgley) is a local bookstore manager who stalks, kidnaps and murders in an attempt to woo his love interest. Dangerous characters like Joe have been fetishized by fans on Twitter, potentially perpetuating abusive behavior. (Courtesy of Netflix)

A dozen roses used to be a romantic gesture. But they no longer seem to be the way to a girl’s heart.

Instead, recent trends in television and film suggest that menacing stalkers, and even killers, might constitute modern romance. Some young fans are fueling such notions, swooning online over the conventionally attractive men portraying horrific characters – Zac Efron as mass murderer Ted Bundy in “Extremely Wicked, Shockingly Evil, and Vile,” and Penn Badgley as fictional stalker Joe Goldberg in “You.” The desirability of such characters is dangerous in terms of how audiences approach relationships and the act of wooing someone.

The media itself doesn’t glorify criminals; it simply tells their stories. But when fans call such characters attractive, they may be causing a paradigm shift toward a more predatory and abusive version of the “ideal man.” There’s good reason to believe that certain men, if overly influenced, may normalize such actions themselves. As such, the fetishization of such characters by fans may be perpetuating a harmful relationship culture.

After playing the quiet, lonely stalker in “Gossip Girl,” Badgley reprised his role as an even more extreme predator on Netflix’s “You.” His character, Joe, a local bookstore manager, seems like the trustworthy “guy next door” up until he goes to extreme lengths to woo his love interest, Beck – including identity theft, kidnapping and murder. The show accurately points out some dangers that women face, even in seemingly safe situations, but some viewers have not interpreted Joe’s actions as such. Instead, some have latched onto the character’s better traits, such as his kindness toward his neighbor’s young son and his love for literature.

A poll by Cosmopolitan asked readers whether or not they’re attracted to Joe; a whopping 69% responded saying they were. These fans, under the influence of “You,” might develop unhealthy definitions of love and relationships.

One thing we can find comfort in, however, is the actor’s take on the issue. A fan recently tagged Badgley in a tweet saying, “kidnap me pls.” His response? “No thx.” Badgley has been consistently shutting down such opinions, letting enamored viewers know definitively that Joe should not be applauded, despite his redeeming characteristics.

A similar phenomenon has already begun to occur with Efron’s role in the upcoming Bundy biopic “Extremely Wicked, Shockingly Evil, and Vile.” The name should say it all and yet, after the trailer release, fans are drooling over Efron’s charisma and handsome physique acting as one of America’s most notorious serial killers.

Sure, Efron’s case is a little different than Badgley’s. Bundy was known to be a charming, intelligent and handsome man, as evidenced by the recent Netflix documentary series on his life. Those who interacted with him had trouble accepting he was a killer, and therefore the allure behind Efron’s Bundy, at least on a superficial level, makes sense. But the average viewer is well aware of Bundy’s crimes – or at least have the means to learn about them – making their swooning responses questionable at best and problematic at worst.

Fans must separate their love for the actor from their perception of the character. Efron himself was hesitant to take on the role because he did not want his image as an actor to be associated with a person like Bundy. Efron has since made it clear that his role is not meant to praise the serial killer, but rather to unpack his psychology for viewers.

“I feel a responsibility to make sure that this movie is not a celebration of Ted Bundy. Or a glorification of him. But, definitely, a psychological study of who this person was,” Efron told Variety.

While fans may positively reinforce such toxic figures, it is a relief that actors like Badgley and Efron consider it their duty to warn fans against their deplorable characters. As celebrities working on controversial subject matters, it is important for them to use their platform well, molding public opinion righteously.

Of course, the trend of stalkers in media is not confined solely to men. A recent surge of such films, including Netflix’s “You Get Me” and “Cam,” gives audiences their fair share of dangerous women. But the Twitterverse remains largely skewed toward male offenders, since “You” and Bundy have gained significantly more popularity.

Regardless of what gender the perpetrator is, there should be no tolerance of their unhealthy and potentially criminal behavior. Secret admirers, take note: Let’s just stick to flowers and chocolates instead.