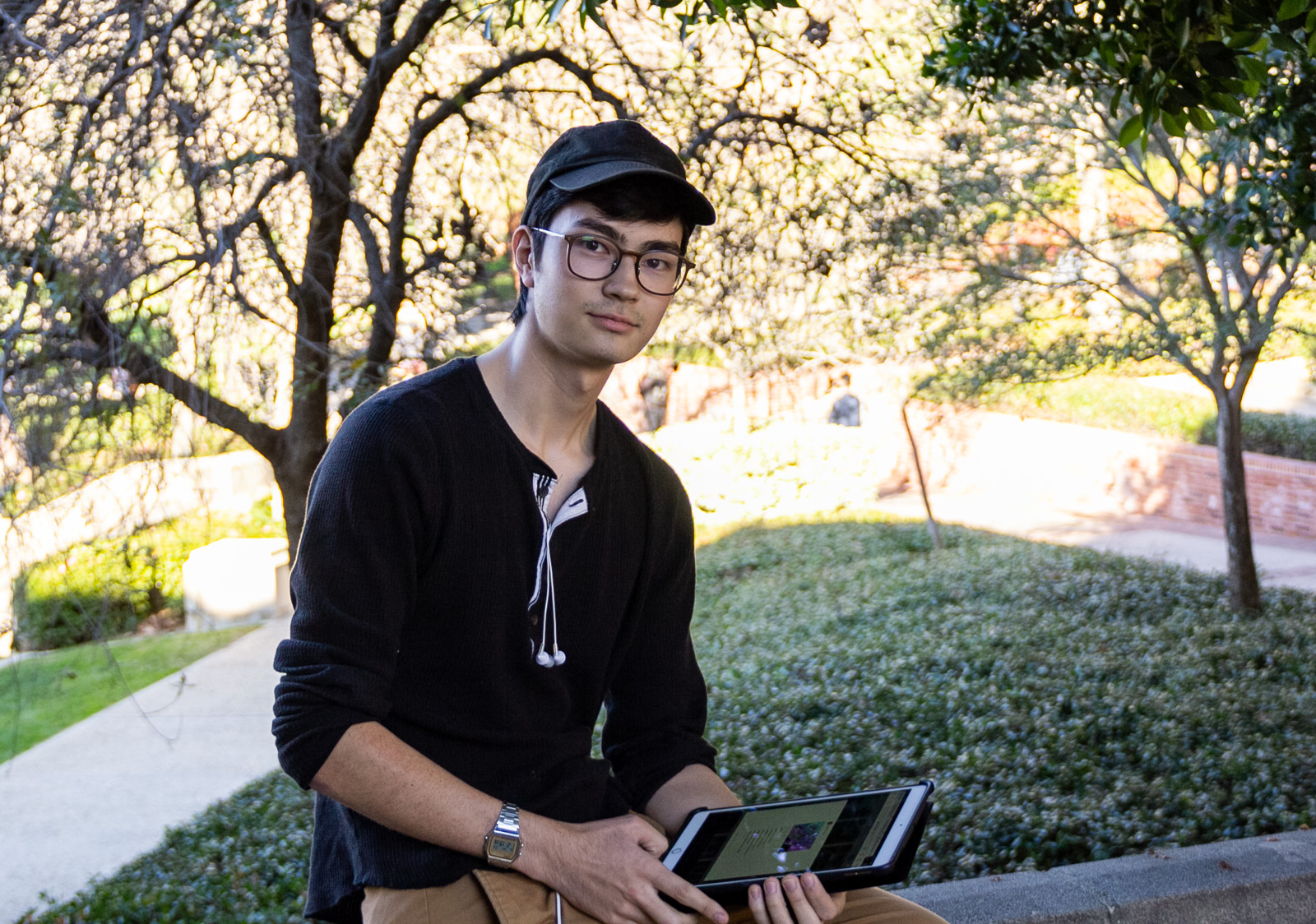 Third-year aerospace engineering student Ryan Weber creates “glitch art,” which is made by manipulating electronics physically or digitally in ways they are not originally intended to be used. His work will be on display at the Kerckhoff Art Gallery as a part of the Bruin ArtPop exhibition.
(Eli Countryman/Daily Bruin senior staff)

The pop-up art show, which will take place Friday at the Kerckhoff Art Gallery, is the first in a series of exhibitions curator Neha Dhiman said she hopes to plan. The second-year pre-sociology student said most o]f the 12 creators involved in the show are pursuing degrees in fields outside of art, and the pop-up is intended to give them an avenue to present their passions. The Daily Bruin talked to a few of the artists about their works featured in Bruin ArtPop.

Dhiman founded an agency centered around models of color.

She took some of the photos for her agency, Ethics, and said they will be part of the exhibition. Dhiman said the company inspired Bruin ArtPop because she wanted a way to spread the word about her project alongside other works created by minorities at UCLA.

None of the models in her photos are Caucasian and she said she intends for the photo shoots to parallel popular fashion magazines that largely feature Caucasian models. She said that her high-fashion shoots sometimes play with props like hair curlers and feel reminiscent of older eras, like the 1950s.

“I try taking pictures you’d find in Vogue, or I try to recreate things I see all the time with the models I use in my pictures,” she said. “It’s to show people of color in the same instances we’ve seen Caucasian models our whole life.”

Ryan Weber put images through audio software to distort the final appearance of his artwork.

The third-year aerospace engineering student creates “glitch art,” or a form of art produced by manipulating electronics physically or digitally in ways they are not originally intended to be used. For example, he said punching a television may result in a form of glitch art if the pixels malfunction.

One of the formats Weber said he uses is “sonification,” or the filtering of images through audio programs like Audacity and playing with echoes, reverberations and the equalizer to give an image distorted waves. Dhiman, who met Weber as a floormate last year, said he introduced her to the art style and she feels like the effects of using programs to glitch images create a sort of augmented reality that makes viewers stop to process the image. One glitch piece involves the image of an astronaut floating in space outside of the Gemini 4, which he said combines both his area of study and his artistic passion.

“I like creating digital art, and I’ve never presented it on a public platform before through a physical medium,” Weber said. “(Glitch art) is, in theory, irreproducible because it comes out as a fault of the program.”

Photography can help the subject – and the photographer – gain confidence, said Elisa Ciappi.

A collection of around 10 female portraits, taken by the second-year global studies student, are also part of Bruin ArtPop. Ciappi said taking photos began as a way to collect memories of her travels, but eventually she turned her camera toward human subjects, starting with her brother. While taking photos, she said she works to make her models feel confident by connecting with them and asking them what type of image they hope to present, rather than simply making them pose. Being social with the girls she photographs helps her remove herself from her own issues with confidence, she said, because the art becomes a collection of her being social with others.

“I have to be very social with the model, I have to make her feel comfortable, and through photography, I go past my insecurities,” Ciappi said. “But I also help other girls get away from theirs, I make them feel powerful, I make them feel confident with their image.”

Dhiman said Ciappi has taken photos of her before and made an effort to get to know her during the session. She said Ciappi’s photos capture facial expressions that show the effort she puts in to make the models feel comfortable.

“She’ll get on the ground and do whatever she needs to do to get the pictures,” Dhiman said. “ She’s just very genuine and her photography is very intimate.”

A three-part art series in Bruin ArtPop will focus on a fictional society that uses human souls as currency.

The “Soul Society” is a construct of second-year design media arts student Jennie Wang’s digital art project from a class assignment about a fictional group of people. One of the three parts depicts a man wearing a mask used during the harvesting of souls, while the other two focus on a physical charm and a device used for extraction.

Wang, who is also a Daily Bruin illustrator, said she used Adobe Illustrator CC to create the three digital illustrations because the paint bucket tool made it easier to create the pieces. In the resulting image, she filled the outlined design with large areas of primary colors to make the piece more bold and reminiscent of a cartoon style, she said, as opposed to the pastel tones that characterize her previous works. She said the colors often reflect her mood while creating art. Tired states of mind create darker images, for example. Dhiman said Wang’s use of colors stands out in comparison to the eclectic set of art styles represented at Bruin ArtPop.

“I’ve seen a few pieces of what everyone is planning on bringing, and everyone is bringing very different things,” Dhiman said. “Her art is very clean, very modern-looking, very, very aesthetic.”