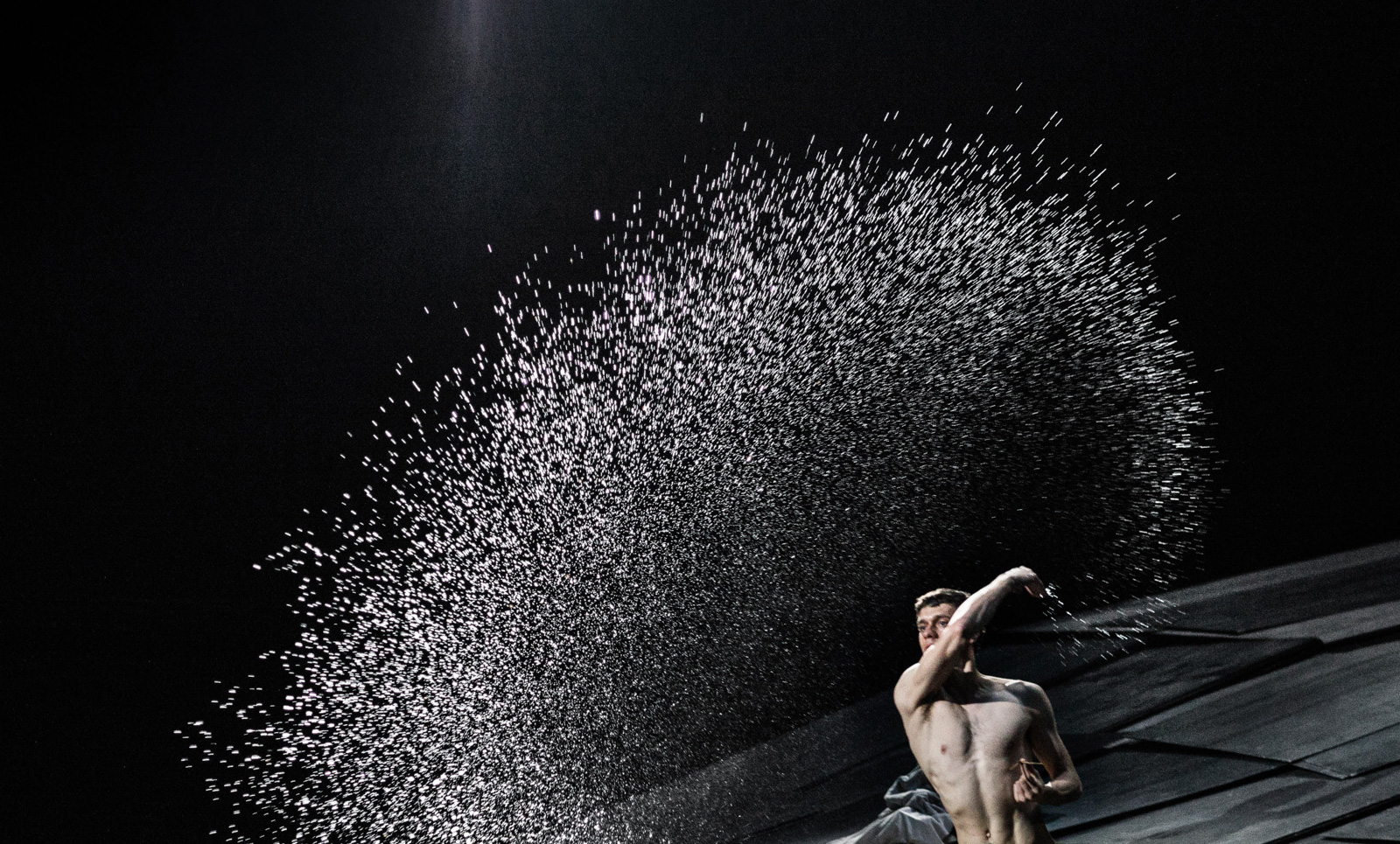 “The Great Tamer,” a piece of dance theater created by Dimitris Papaioannou, premiered in the U.S. on Friday in Royce Hall through the Center for the Art of Performance. (Courtesy of Julian Mommert)

A performer was already standing on the Royce Hall stage as the audience shuffled toward their assigned seats. He emulated the frozen stride of an Egyptian hieroglyph while his head gently pivoted on its axis to scan the space.

The show was about to begin, or had it already?

The man launched the experimental performance with his singular presence, taking off his shoes before stripping down entirely. However, it is from the performers’ unpredictable, yet precisely calculated scenarios that the show, created by 54-year-old Greek director and choreographer Dimitris Papaioannou, draws its moving power. Attendees witnessed mind-bending corporeal constructions peppered with embodiments of historical art scenes – such as Rembrandt’s “The Anatomy Lesson of Dr. Nicolaes Tulp” and the still-life genre. Snippets of Strauss’ “The Blue Danube” accompany the optical illusions created by the breaking apart and rearranging of human bodies in the nonfictional theater piece. Papaioannou and his team of 10 co-producers visualized and directed his most recent work, “The Great Tamer,” which is currently on international tour. The show premiered in the U.S. on Friday through UCLA’s Center for the Art of Performance, all the while comforting, disturbing and perplexing its audience.

As if in a dreamscape, the performers move in a world informed by recognizable props – a plain pair of shoes, a book, an orange, a slinky, a flower pot, a globe. While the medium seems familiar, the interaction between the people and the materials veers into the surreal. A barefoot woman wearing a toga and balancing a pot on her head emerges from left of stage, reminiscent of mythological and pastoral Greek motifs. Meanwhile, a nude body with a female torso and two disproportionate, hairy, backward male legs tiptoes diagonally across the stage like a one of Edgar Degas’ painted ballerinas. You have to blink twice.

Such bizarre body collages are achieved by meticulously covering the performers’ bodies in black bodysuits and leaving exposed only that limb which will contribute to the Frankenstein-looking superhuman form. One of the body collages consisted of six performers – a forearm here, another head there and another pair of legs at the base – exercising an acrobatic feat of balance. The body inches forward wobbling on the set’s platform before disintegrating into an unsettling heap of disjointed limbs. Watching the efforts transpire on stage is a philosophical sensation – one that hints at Papaioannou’s expression not only of the extraordinary composition of the human body, but perhaps the nature of human relationships and communities themselves. The images demonstrate just how intimately reality and the imaginary are intertwined, and that one need not look beyond what already exists to summon the unprecedented through magnificent and macabre metamorphosis.

Like the props and the performative bodies, the set instills a similar effect on the viewer in providing a legible space. The stage consists of a black paneled platform the uneven, sinuous form of which mimics the topography of the earth’s surface. But once again, it proves to be imaginary territory as figures and disjointed limbs emerge from and disappear into the ground.

An astronaut mills about the platform in slow motion, her labored breaths growing increasingly ragged as she lifts a black panel, reaching into the ground to pluck out a limp nude male. For a moment the imagery resembles art historical scenes of Christ’s descent from the cross, but in this case is contradicted by a context of birth. Beginning to examine the surroundings of his newfound world, the character acquires animation and eventually stands upright, assuming a contrapposto stance to emulate the many sculptural poses of antique masterpieces. Instances like these demonstrate Papaioannou’s effective approach to demystifying archaic and unobtainable qualities, such as idealized proportionality and beauty, that pervade artworks. When a real human body transforms into a breathing classical sculpture, it signifies the idea that art and life are one and the same.

Props and setting together create the ecosystem for a material world in which narratives might unravel, but only in the loosest sense. As soon as a vague storyline begins to take shape – a man’s possession of a slinky captivates a crowd until he falls off a ledge; another man is lured in by a goddess figure’s offer of nourishment – it is immediately recalled and disrupted by a nonsensical sword fight or an earsplitting noise that knocks any notion of reality off-kilter once again.

While some might find the lack of a distinct storyline frustrating, its effects are actually more long-lasting as they leave viewers with thematic treatments of struggle and growth, birth and death. The two-hour performance elegantly enacts metaphors about compassion and ambition in various actions, the most poignant consisting of performers repeatedly putting on someone else’s shoes, as well as one encounter in which a character liberates another from a full-body ceramic cast, doing so through slow, tender-yet-firm embraces of the figure’s every limb.

Returning to the initial action of one man looking at the audience as if it were the true spectacle elucidates the push behind the performance itself. The audience is indeed the source of inspiration for the director’s astonishing visions. The artist ensures he never loses his audience to oblivion or overwhelming confusion, maintaining a delicate balance between the dreamlike and what is known reality. The experiment processes and regurgitates humans reckoning with their environment, their bodies and one another. The saying “We are the universe experiencing itself” never seemed more applicable.