Sugarcoated: With toppings abound, The Dolly Llama can make you one waffle with everything 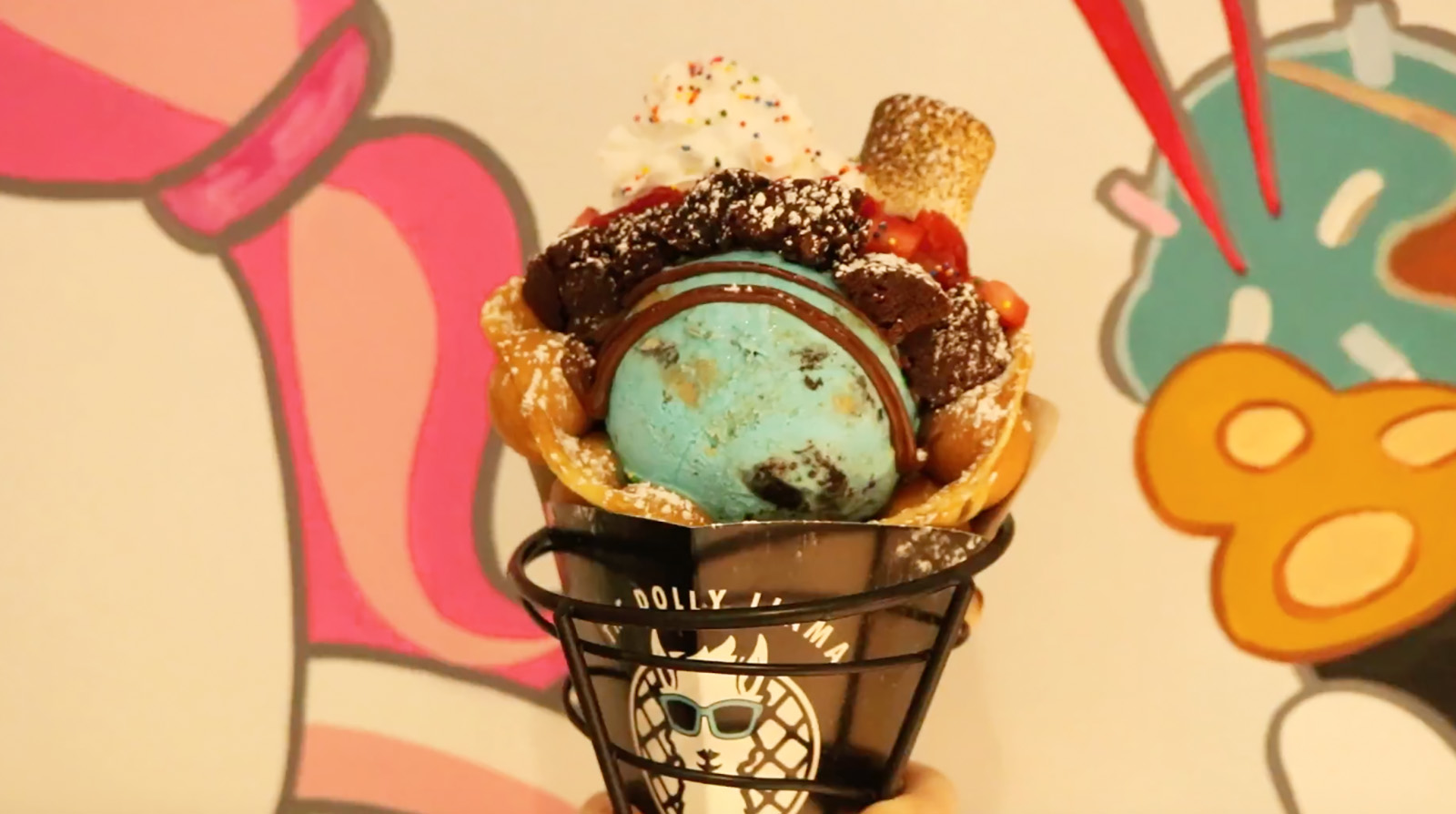 The Dolly Llama is a Koreatown waffle joint that allows patrons to choose from one of three different types of waffles, then complete their dessert with ice creams, drizzles and toppings. One premixed combination includes a cone-shaped waffle with blue Cookie Monster ice cream, Nutella, strawberries and a toasted marshmallow. (Jordan Stewart/Daily Bruin senior staff)

A llama wearing blue sunglasses is the face of a Koreatown waffle joint.

With one sister location in Downtown Los Angeles, The Dolly Llama serves up three different waffles – the “OG” Belgian waffle, the bubble waffle and the waffle stick – each accompanied by various ice cream flavors, toppings and drizzles. The shop is decked out from head to toe with iconic imagery and merchandise: a 3D neon llama sign on the ceiling and “WANTED” posters with llama mug shots. Hooves printed on the floor led me to an upstairs seating area where tables were lined with succulents and a wall was decorated with a mural of step-by-step waffle-eating instructions.

The kitchen staff invited me behind the counter to make my own treats. The menu stared back at me, and I did not know where to begin. The staff recommended a premixed bubble waffle combination, which I decided to prepare with their assistance.

A bubble waffle is shaped like a waffle cone, but a warm, soft texture replaces the traditionally crunchy one. To begin, I squeezed the batter out a bottle into the waffle machine. I watched the excess batter drip out, its scent decadent. Three minutes later, the timer beeped. I struggled to maneuver the machine but eventually opened it, using a spatula to carefully peel the waffle from it. Unsuccessful in keeping it intact, I proceeded to build the complete dessert with a torn waffle.

The signature dessert included blue Cookie Monster ice cream in the bubble waffle, topped with strawberries, Nutella, whipped cream, a toasted marshmallow, rainbow sprinkles and powdered sugar. The marshmallow, toasted before me with a blowtorch, was slightly charred – not burnt and melted, like your typical s’more filler.

The overwhelming finished product was larger than my face, served in a branded llama paper cone. The whipped cream was piled high on top, and I was afraid it would slide off due to the heat of the waffle. Upon first bite, I realized there were not enough strawberries to counter the dominant candy taste with freshness. It didn’t help that the dessert was poorly structured – I had trouble getting waffle and ice cream together in a single bite. Moreover, the ice cream’s flavor was enjoyable alone, but it got lost among the colliding plethora of toppings. The bubble waffle, decidedly, didn’t live up to its full potential.

Next, I attempted to decorate a waffle stick, which only takes two minutes to make fresh. The process included squeezing the batter out a bag and into smaller cutouts in the waffle machine. Prior to closing the machine, sticks were carefully placed in the center of each leaf-shaped section, allowing the waffle to cook around it.

After cooking them, I drizzled green-tea syrup on top, adding M&M’s, Froot Loops, rainbow sprinkles and strawberries. The syrup was by far the best part of the waffle sticks, and I was excited to use it because of matcha’s peaking popularity in the dessert world. It wasn’t too sweet itself, but I got carried away with the obscene amount of toppings I packed on the petite sticks and ended up with something far too sweet.

I thought the waffle sticks would be much easier to pick up and eat than my first creation, but wrongly so. Even the hefty amount of green-tea syrup wasn’t sticky enough to hold the toppings to the waffle. Because the presentation was so stellar, I feared the flavor wouldn’t match up. But I was thrilled to find the waffle stick tasted as good as it looked.

Although I would have enjoyed the desserts just as much with fewer toppings, I had a blast getting whipped cream up my nose and tearing apart the bubble waffle. Not even the items’ messy constructions could prevent me from concluding The Dolly Llama sure is the waffle master.