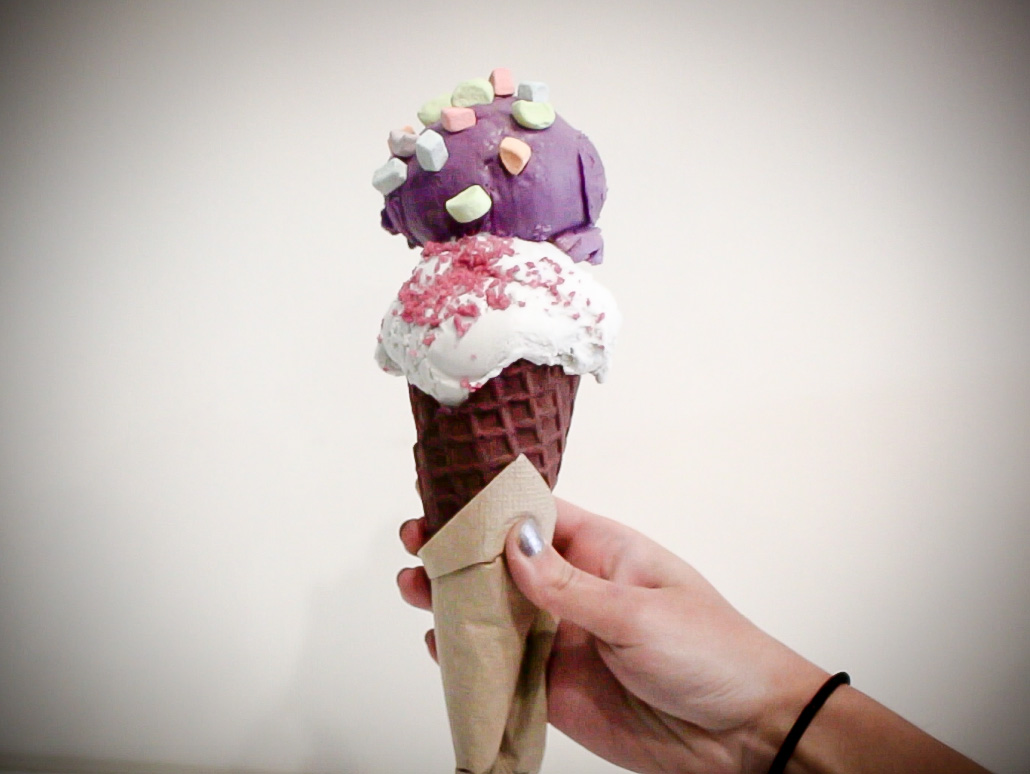 Wanderlust Creamery offers a trip around the globe that doesn’t require a passport.

The artisanal ice cream shop sells flavors inspired by food from a multitude of countries. With shops throughout the Los Angeles area, co-founders Adrienne Borlongan and Jon-Patrick Lopez were inspired by their childhood memories, past travels and locations they plan to travel to. Its offerings span the map from France, with their honey lavender ice cream, to the Philippines, with its salted duck egg custard ice cream. I popped into its Tarzana location to let my taste buds explore the world.

When I walked in, I was struck by how trendy the store was. Bright white walls were complemented with sparse decor. Though there wasn’t much seating available, each table displayed different globes, such as a gold one and one with black details outlining each continent. Near the ice cream buckets was half of a globe containing cones with fake ice cream. Containers of toppings, such as English toffee and pure cocoa butter sprinkles, lined one side of the cash register.

Despite it being a Wednesday evening in October – not necessarily what’s considered prime ice cream time – a variety of customers came into the creamery. People wandered in and out of the shop, trying multiple flavors with reusable silver spoons.

Though the interior may be simple, the flavors are anything but. For my first taste test, Borlongan placed a scoop of Ube Malted Crunch atop violette marshmallow, two of its most popular flavors, she said. She sprinkled some rose crystals atop the violette marshmallow, the pink topping standing out against the light blue color of the ice cream. For the Ube Malted Crunch, she put cereal marshmallows – think off-brand Lucky Charms – to top off the dessert.

The Ube Malted Crunch was a vibrant purple reminiscent of Barney the dinosaur. But the shocking shade shouldn’t scare you off – it offers an interesting flavor. Despite the name, however, the ice cream did not have any of its own crunch. The bold color, complimented by the dark purple of the ube cone and topped with marshmallows, makes for a delightfully childish aesthetic.

The violette marshmallow had a softly sweet flavor, with the marshmallow creme offset by a floral twist. The rose crystals contributed cut to the dessert, offering a sharp sweetness to contrast the subtle ice cream flavors.

The ube cone was sweet, but not overwhelmingly so. It served as a welcome opponent to the typical waffle cone. Where a waffle cone is often nothing more than a means of consuming ice cream, the ube cone stood on its own as a crunchy snack. At the very least the ube cone is worth it just to hold the deep violet in contrast to the store’s white walls for an aesthetic Instagram photo.

These two flavors paled in comparison to the sticky rice and mango ice cream, a delicacy inspired by a Thai dessert. This dessert is a bit more intensive than the others, and I was invited behind the scenes to watch the production team put it together. First, they left the sticky rice to process for about 15 minutes. When it was finished, they poured one layer into a tub, then layered alphonso mango and added another layer of sticky rice. The process was quick, requiring two people to pass the tub back and forth, adding layers as they went. Next, they folded the layers, mixing the white sticky rice with the bright orange mangoes.

All the effort was worth it. The sticky rice ice cream was slightly textured, offering a surprise, subtle crunch far different from the smooth creaminess one typically expects from ice cream. The mango’s sweetness, though not apparent with each bite, wasn’t overwhelming, and paired nicely with the sticky rice’s texture.

Overall, Wanderlust Creamery offers enough variety for anyone wishing for a trip around the globe. And though it is a bit pricey – one scoop is about $5 – it’s worth it for flavors that are difficult to find elsewhere.