Photography exhibit to showcase connections between Israeli and Palestinian women 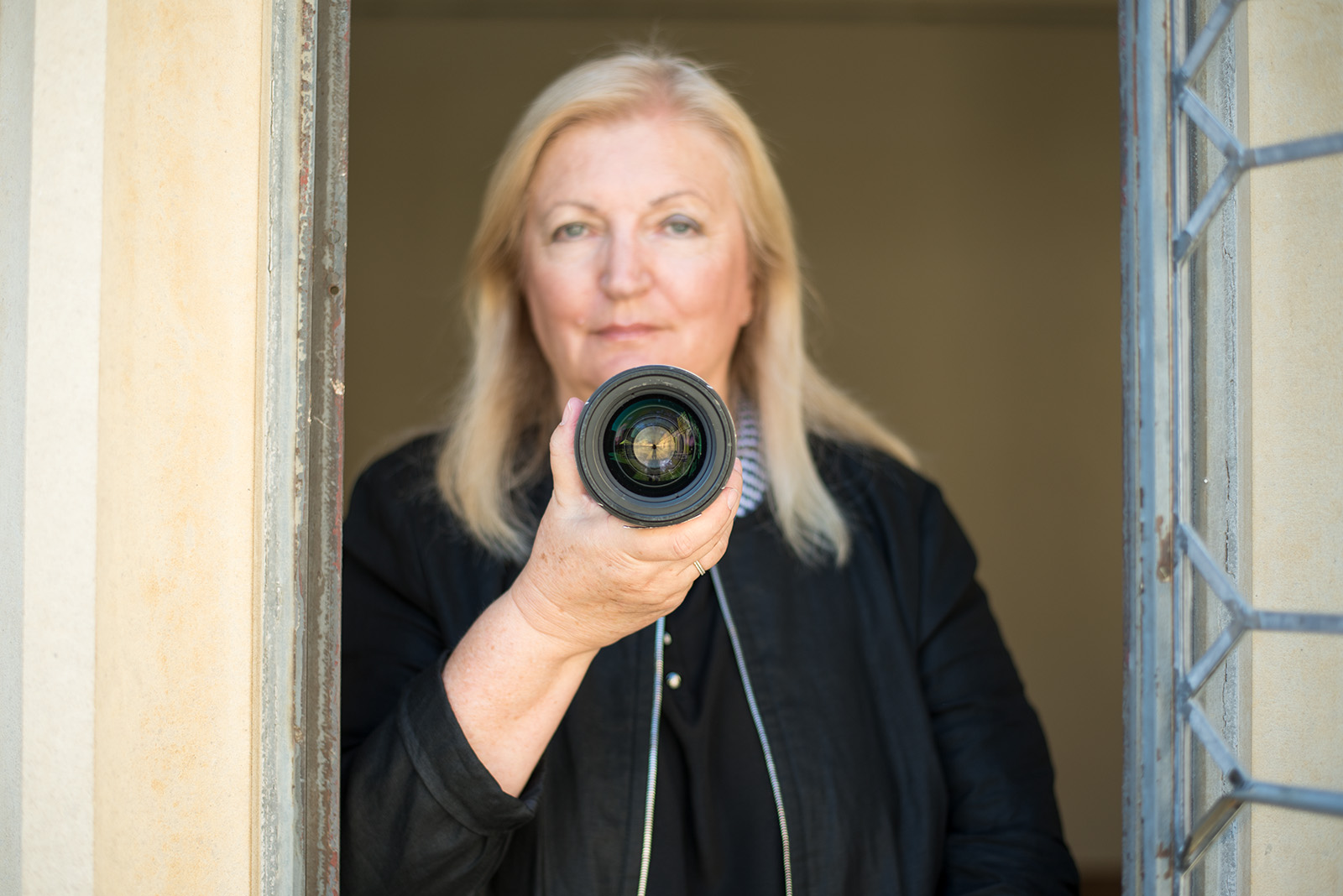 Perla Karney, the artistic director of the Dortort Center for Creativity in the Arts, organized an exhibition titled “Love Thy Neighbor : The Refugee Experience.” Featured in the exhibition are images from 2017 summer workshops for Israeli and Palestinian women hosted by Saskia Keeley. (Axel Lopez/Assistant Photo editor)

Correction: The original version of this article contained several errors. The article incorrectly attributed the photographers featured in the collection. The article also incorrectly stated Keeley was writing a book on conflict resolution. In fact, she is writing a chapter of a book.

Over 100 Israeli and Palestinian women looked directly into one another’s eyes for the first time in their lives during Saskia Keeley’s workshops.

Keeley began hosting summer photography workshops for Israeli and Palestinian women in 2016 through a partnership with Roots, an Israeli-Palestinian initiative in the West Bank. She collected the photographic outcomes for an exhibition titled “Roots Non-Violence,” which is currently on display at UCLA’s Hillel until Dec. 20. She also will be delivering an artist talk, free and open to the public, to relay her workshop experience Tuesday. By offering a glimpse into the reality of Israeli and Palestinian womens’ perspectives on the world, the exhibition bears testimony to the ways the photographic medium can bridge gaps between women of both cultures, Keeley said.

“For many of these women, it was their first time ever meeting anyone from the other side,” she said. “I got to see very early on how the workshops were transformational for these women.”

Keeley said creating a same-sex safe space for the women is both crucial and rare due to a tangled history of violence, trauma, fear and bias in the West Bank. Palestinian women in particular face opposition from their community, she said, which forbids them from mingling with Israelis. Keeley said it was important the workshops promote cultural sensitivity.

Recruiters promote the workshops through Facebook, she said, and information spreads through word-of-mouth. Although participants attend the workshops out of a desire to be with “the other side” they do not come without hesitation and ambivalence, Keeley said. Therefore she structured her workshops to ease into advanced camerawork and then nurture deepened connections between the women.

During early moments of their meeting, Keeley said the women gather in a circle for introductions to share short narratives, beginning to understand each other’s experiences. In later sessions, Keeley said each woman pairs up with a member of the other side to take portraits of one another. By the final session, she asks photographers to capture striking details of their subject’s physical appearance, like earrings or a hijab, in a process that allows both women entry into intimate proximity with one another without a sense of invasion.

“With the camera, you have to truly see each other to take a good photograph, and you have to allow your vulnerability by choosing to be the subject to somebody who is your perceived enemy,” Keeley said.

Although Shuli Elazar, an Israeli participant, said while she had already met Palestinian people through other peacemaking initiatives, the workshops offered a deeper level of physical connection where women observed minute details about each other.

“That is sometimes not even something you do with people who are your best friends, to look very closely at small details, and it made us talk and laugh and feel free with each other,” Elazar said. “We looked closer and it made us closer.”

The women keep their cameras for the duration of the two weeks, returning to their homes to fulfill photo assignments by capturing their environments, loved ones and daily lives. Keeley said the images are reviewed and displayed during following sessions, allowing the women to discover their shared values and common priorities in life.

The women bonded over family, motherhood and beauty – some even removed their headscarves and photographed one another without headgear, or rewrapped a Jewish settler woman’s headscarf as they would a hijab, sharing tricks for giving the illusion of thick hair underneath a headpiece. When Israeli women photographed the ritual candle lighting for Havdalah, Keeley said Arab-Palestinian women made efforts to inquire about the purpose of the Jewish holiday.

“By the end of the four sessions, there is a real willingness to hear more about the other side and what is important to them, and it is really beautiful,” Keeley said.

The best images of the 2017 summer workshops became one of four exhibitions in a larger exhibition titled “Love Thy Neighbor: The Refugee Experience,” organized by Perla Karney, the artistic director of the Dortort Center for Creativity in the Arts. Karney said the reception of Keeley’s exhibition has been powerful because of the photographs’ striking aesthetic appeal and deeply emotional dimensions. “Mother and Son” displays family members in tunics and headscarves seated on a doorstep, amusedly peering out at the viewer. “Havdalah” features a young Jewish boy performing the ritual of lighting the candle and looking at the luminous flame in wonder as his grandfather supervises.

For many, the intercultural conflict is a distant occurrence about which they formulate their opinions via media sources like CNN or BBC, Elazar said. However, she said media does not always accurately portray reality, and so she said she hopes viewers will be urged to rethink their opinions and stigmas to truly understand the complexity of the issue.

Students who choose to attend can glean value from the dialogue of conflict resolution the exhibition evokes, said Ben Greenberg, director of student life at Hillel. Although all artistic mediums can promote understanding, he said photography is especially impactful for its direct visual appeal.

“Universally, there’s a lot of misunderstanding when people ‘other’ one another, forgetting the humanity of the individual,” Greenberg said. “Something about photography can really highlight that basic humanity, which is an important message especially in politically contentious times.“

After interacting with the attendees of her six workshops, Keeley said she has decided to change her career trajectory. Previously leading a photojournalistic career, Keeley said she is now determined to focus on providing workshops in areas of conflict across the globe. She is currently writing about conflict resolution, which will include her experience with photo workshops in the West Bank that provides her first-hand insight on mediating such encounters.

“Many people have preconceived ideas about one side or the other and by the end of the exhibition, the goal is to leave saying, ‘I just got a glimpse into these women’s lives and they are not terrorists nor the horrible occupier, they are just trying their best,’” she said. “The experience transformed me as well, and made me realize what an incredible tool the camera can be for dialogue.”