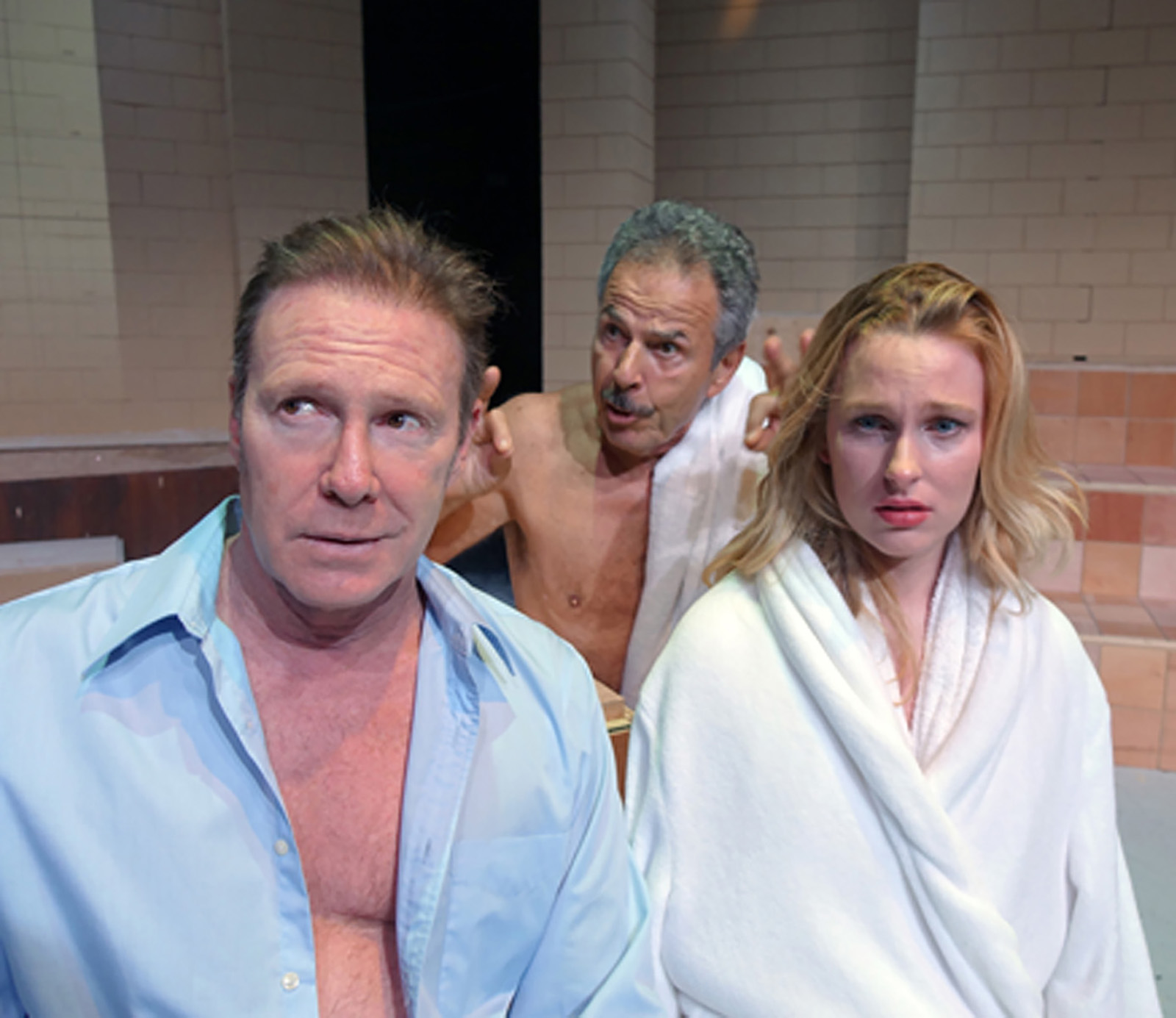 Jeff LeBeau, Robert Lesser and alumna Shelby Lauren Barry star in “Steambath,” a comedic play imagining purgatory as a steam bath and God as a Puerto Rican attendant. Although much of the humor may be considered offensive, Barry said she hopes presenting the play unaltered from it’s original production will encourage discourse about the topics.
(Courtesy of Ron Sossi)

Purgatory is a steam bath and God is a Puerto Rican attendant in Bruce Jay Friedman’s upcoming play.

“Steambath,” which premieres Saturday at the Odyssey Theatre, follows the life and afterlife of protagonist Tandy as he grapples with his own mortality. After stumbling into a steam bath, Tandy meets an odd assortment of characters – two gay gypsies and a nude girl named Meredith, among others – each with a unique death story. While the sexist humor permeating the play went unquestioned in the ’70s, today it is meant to spark conversation concerning the stereotypical characters, said Shelby Lauren Barry, a UCLA alumna who plays Meredith. Although many of the play’s jokes are outdated and even offensive, director Ron Sossi said he and his creative team decided not to update the play in an attempt to maintain its integrity. The insulting humor would be more accepted in its original historical context, Sossi said.

“There are a lot of things in the play that would be considered politically incorrect today,” Sossi said. “It’s racist, it’s sexist and nobody goes away unscathed.”

To stage a faithful adaptation, Sossi said he wanted to keep the play set in the early 1970s instead of revamping it in a modern setting. Changing Tandy’s favorite sketch comedy series from “Rowan & Martin’s Laugh-In” to “Saturday Night Live,” for example, simply would not work.

Margaret Starbuck, an assistant director and UCLA alumna, said the play was written during a time when people had different attitudes toward women and gender expression. Friedman, who typically worked as a gag writer, was miming what people thought was funny at the time. His inclusion of female stereotypes and racial humor might be considered off-putting to modern audiences, she said.

“The play has all these characters and these attitudes that are sexist and problematic,” Starbuck said. “I think it’s the job of the actors and the directors to bring a contemporary lens to those issues and see how we can question what the play is doing without undermining (the show’s intention).”

Starbuck said Barry adds complexity to a character who, on the page, could read as one-dimensional and unintelligent – common traits of the stereotypical woman in older plays and movies. Meredith is introduced while showering naked in the middle of the steam bath where she becomes Tandy’s love interest, and her last memory is of shopping at Bloomingdale’s. Although Meredith as a character remains the same as in the original production, Barry said she hopes audiences recognize Meredith’s emotional depth and kindness as more defining characteristics than her affinity for shopping, such as when she discusses how moved she is by other people’s death stories. By showcasing Meredith’s empathy toward the other characters, Starbuck said Barry implores the audience to view her character beyond her looks.

The fact Meredith is the only major female character and her defining fear is not paying her Bloomingdale’s bills makes it obvious the play was written by a man in the ’70s, Barry said. Additionally, when each character shares their death story, she said her character’s story is the only one omitted. Starbuck also said the male characters are often derogatory to their female counterparts, making comments about their bodies and referring to them as “broads.” In the midst of the #MeToo movement and the Brett Kavanaugh controversy, Barry said she hopes Meredith’s lack of a voice will encourage audience discourse about women’s stories that have been suppressed for so long.

“We see the one woman in the play literally not getting to tell her story and I don’t think anyone would have thought twice about that when it was written,” Barry said. “But now we do, and hopefully our show will highlight those issues rather than play into them.”

Although most of the insulting humor that underlies the original script made it into the show, Sossi did end up cutting some of the most offensive parts of the play, such as a joke about a cross-dresser. When the play was first written, Starbuck said it was meant to be a shocking, impolite piece of theater that got a rise out of the audience, and the team worked hard to maintain that tone while making it palatable for a modern audience.

“I hope that the audiences engage with the show and laugh at the jokes because I do think there are a lot of really funny parts,” Starbuck said. “I hope that they think about mortality, their own lives and how they’re connecting with other people.”