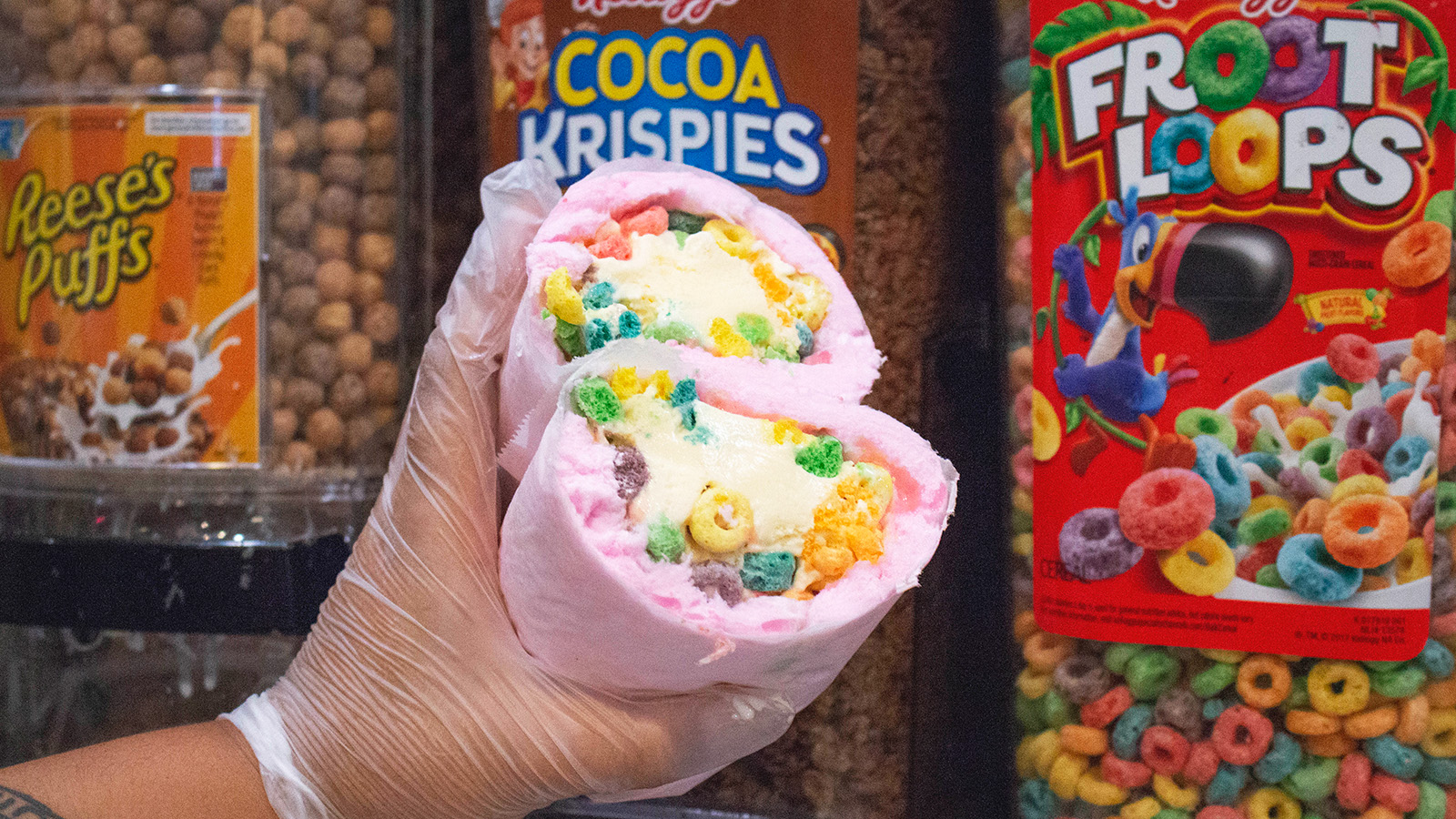 Milk Tavern, a dessert shop in Koreatown, is known for its often daring combinations of ice cream and cereal. Patrons can create their own combinations, choosing from a variety of cereals stocked in dispensers along a wall. (Rachel Lee/Daily Bruin senior staff)

The dessert shop’s clubhouse atmosphere, as well as its unusually spacious interior, sets Milk Tavern apart from the traditional ice cream hotspot. Decorated with flashy neon signs and rows of pink flamingos, the Koreatown store’s casual vibes align more with a teenager’s tricked-out basement than a business establishment. Shuffling in with the other college-aged patrons, I looked up nostalgically at the colorful dispensers of cereals lining the back wall – childhood classics like Fruity Pebbles, Cocoa Puffs and Cinnamon Toast Crunch. Known for its swirly and often daring combinations of ice cream and cereal, Milk Tavern offers a create-your-own dessert option alongside signature blends like Peanut Butter Attack and Jolly KTown Pong.

Making a quick turn into the cereal bar, I squeezed among the containers of toppings while employees flitted back-and-forth across the narrow walkway. I decided to first try my hand at a personal creation, opting for vanilla ice cream as a base, Cinnamon Toast Crunch as the cereal and Oreo crumbles as a topping. To add a pop of color, I paired my trove with a lavender ice cream cone, after much deliberation over an equally tantalizing matcha one.

Milk Tavern employee Layne Kapp assisted me in loading the cereal, Oreos and ice cream into the swirling mechanized contraption, which used a drill-like bit to blend the disparate elements together. The ice cream, gathered neatly into the pastel cone, retained small chunks despite its surprisingly cohesive flavor. The flavor itself was reminiscent of the milk left over after eating a bowl of cereal, in the best possible way. It was sweet without being overbearing, traces of cereal only just detectable. Though many of the toppings seem like they wouldn’t pair well with cereal, customers have found that the oddest combinations – say Oreos and Fruity Pebbles – can yield the best flavors, Kapp said.

The next dessert I tried was as Instagrammable as it was sweet, and has already been widely featured across the annals of the internet: the ice cream burrito. Simple in concept, the burrito uses a flattened, pink bed of cotton candy to form the tortilla-inspired base. Aided by another Milk Tavern employee, I watched as vanilla ice cream was scooped and shaped into a cylindrical blob, then placed atop the cotton candy and finished with a sprinkle of rainbow Froot Loops. The dessert burrito was then rolled up, sliced and wrapped in pink paper. Though I enjoyed each delectable treat on its own, the combination of the three was a tad too saccharine for my already-elevated blood sugar.

Stocked with sweet surprises for visitors of all ages, Milk Tavern’s layout transitions seamlessly from a bright ice cream counter to a fully-stocked bar – the only part I couldn’t partake in. The glass bottles clinked playfully against each other as servers poured out beverages like Locust Cider Dark Cherry and sauvignon blanc. The two seemingly irreconcilable halves of Milk Tavern come together with its selection of alcohol-infused ice cream flavors, which includes Tequila Lime and the popular Jameson, made with the Irish whisky.

While rapidly exhausting my supply of ice cream, I lounged in the soft couches Milk Tavern offers to its customers. Facing two television screens embedded into a quirky hedge-covered wall, customers can indulge in old-fashioned video games like the original Super Mario, completing the nostalgic return to childhood cheer. A few feet away, I sifted through the shop’s stacks of board games. I contented myself with watching a couple play Connect Four as they occasionally dipped their forks into Milk Tavern’s Unicorn Crepe Cake.

Though the creations I tried did not require much assembly, the simplicity of the desserts allowed the flavors to shine through without being impeded by superfluous frills. The picture-perfect aesthetic of Milk Tavern’s desserts adds a youthful playfulness, making it ideal for a Saturday night out. Completing the mood, the laid-back atmosphere provides a cozy place for friends to gather and converse, and perhaps even play a board game or two. 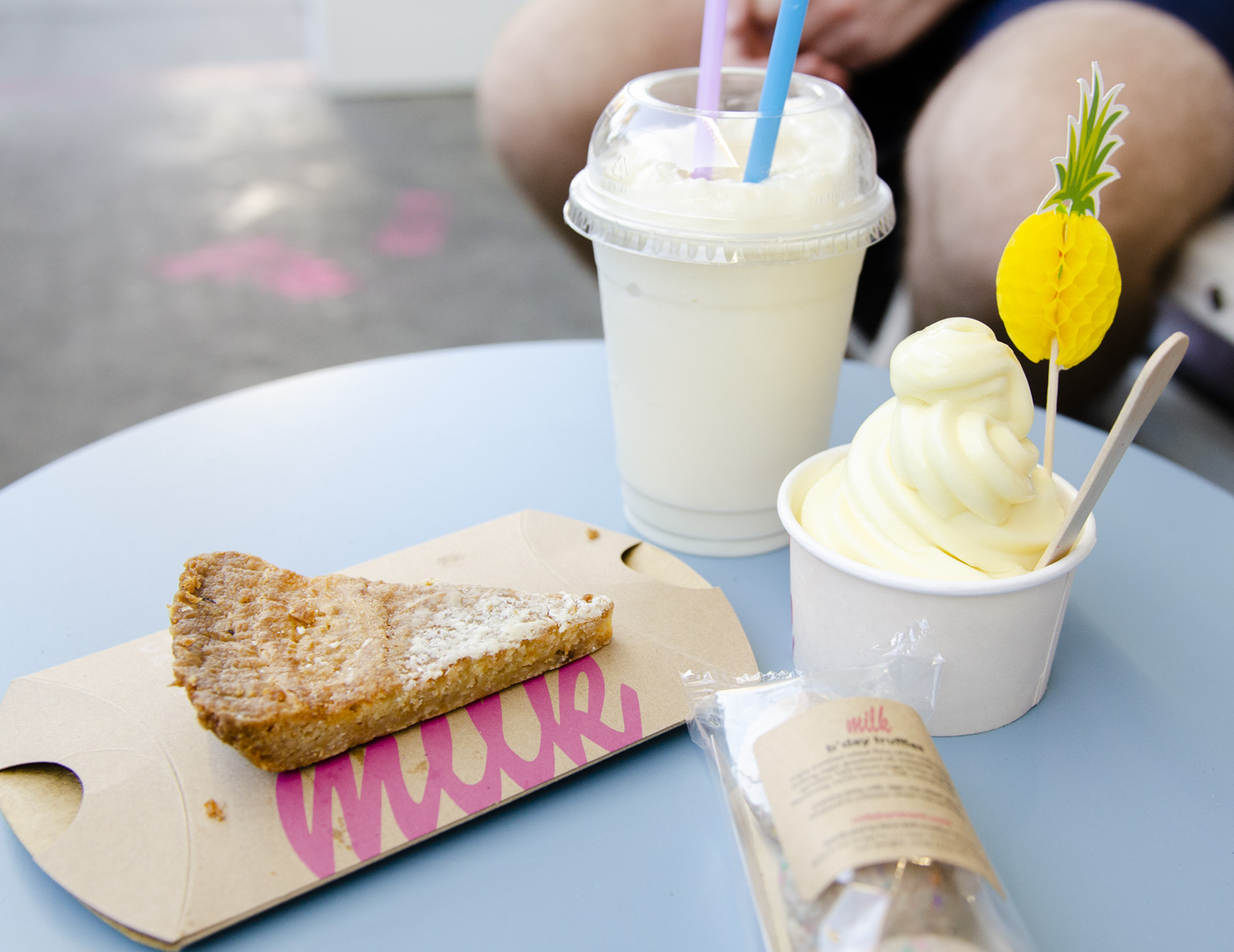 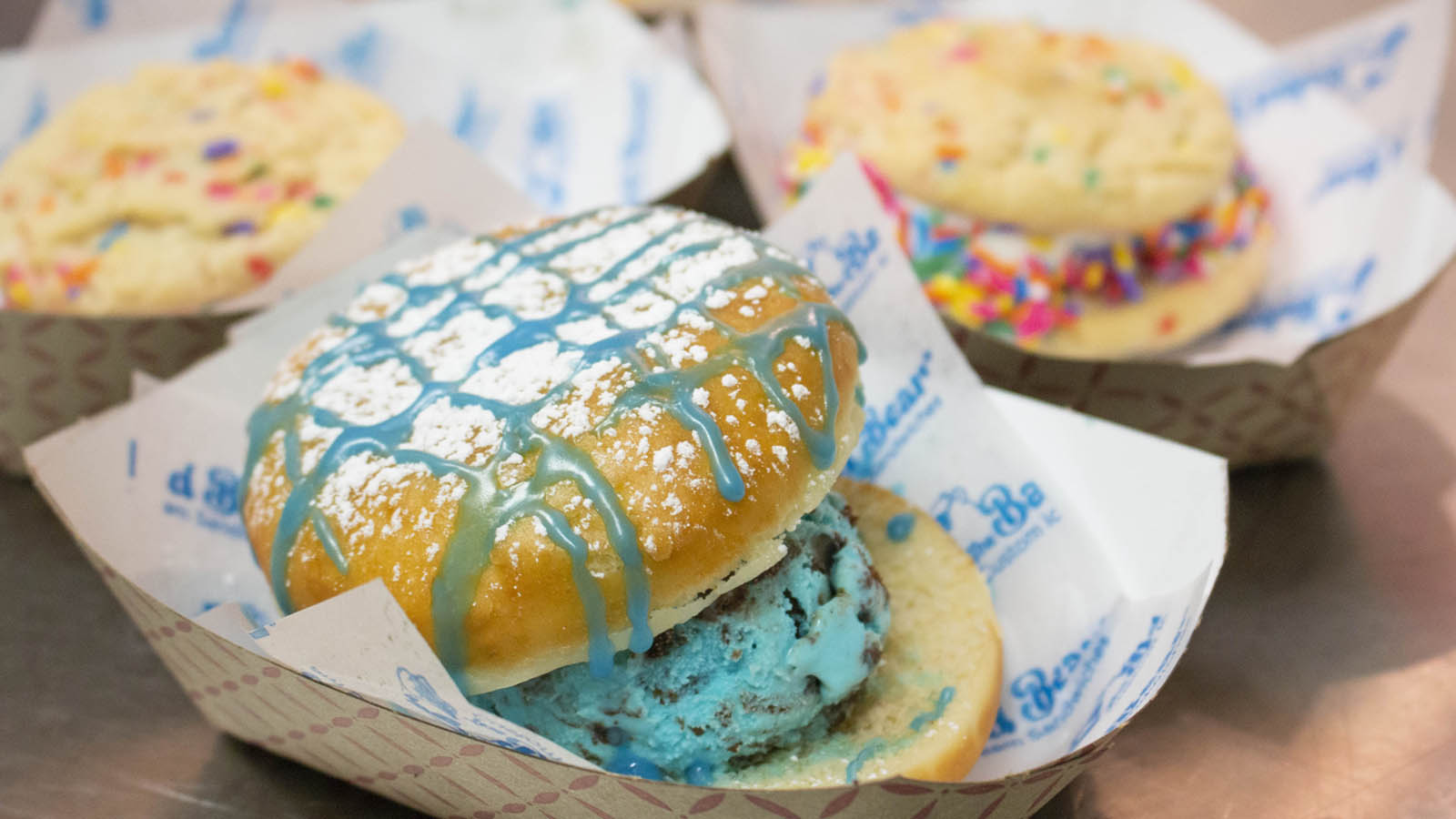 Sugarcoated: The Baked Bear delights with its flashy decor and dangerously sweet offerings