Concert review: The Carters’ ‘On the Run II Tour’ is an honest, moving tribute to true love 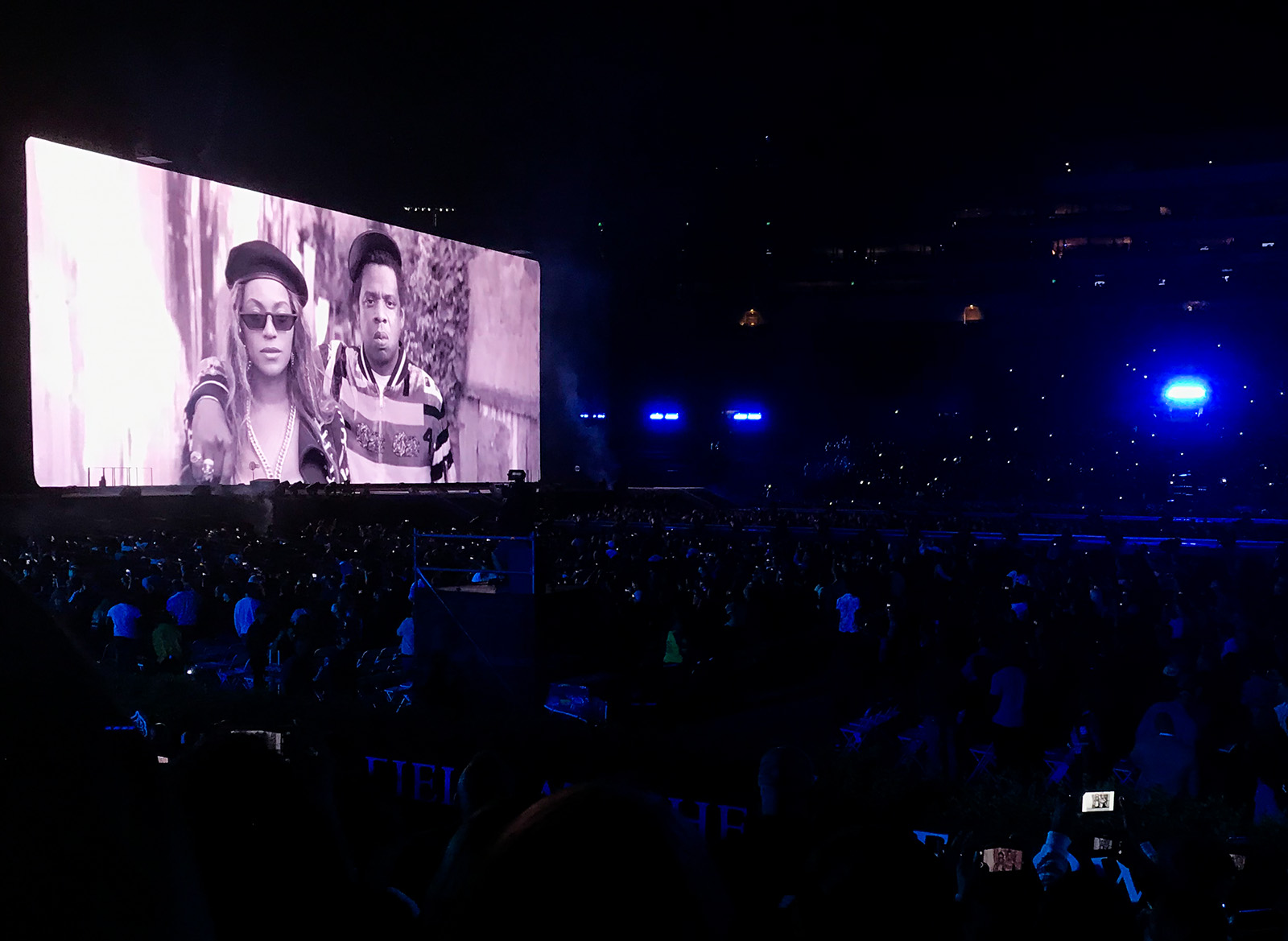 Beyoncé and Jay-Z took the stage in Los Angeles on Sunday night for their “On the Run II Tour” after a performance by opener DJ Khaled. The couple performed hits from both of their solo albums as well as ones from their joint album, “EVERYTHING IS LOVE.” (Ruhi Shah/Daily Bruin)

“On the Run II” is a spectacle with fireballs blazing and fireworks bursting, but Jay-Z and Beyoncé’s tour is foremost an ode to love.

Since their “On the Run Tour” in 2014, the Carter family has grown by two children and three albums. With the emotional build-up of Beyoncé’s “Lemonade” and Jay-Z’s reflection in “4:44,” the couple’s joint album “EVERYTHING IS LOVE” was an open approach to public marriage and reconciliation. Interspersed with political messages, the couple’s performance at the Rose Bowl on Sunday invited everyone to join together with a love for music and one’s self.

After a lackluster performance by DJ Khaled where he brought out musical guests and held the mic to the audience for nearly every word of each song, the audience anxiously awaited headliners Beyoncé and Jay-Z as Khaled scootered off stage.

Announcing their arrival, a visual overtook the enormous screen to remind the audience, “This is Real Life.” A montage of videos with motifs of money, fire, water and sex covering the screen backed by Kendrick Lamar’s “X” from the Black Panther album set the stage – a sensory marvel from the start. One of the final screens paused on Beyoncé and Jay-Z each cradling two babies while another displayed the words, “Love is Unreal.”

Jay-Z and Beyoncé entered via elevator, decked in white, staring intently into the crowd. The audience screamed, reminding everyone of the influence the duo wields in mainstream music culture.

After their entrance, The Carters broke out in an electric performance of “Holy Grail,” with Beyoncé hitting every note of the hook with effortless accuracy. She sang directly to her husband, making the performance significantly more intimate than the original singer, Justin Timberlake might have. The song took an entirely new meaning as she mouthed Jay-Z’s lyrics with her hand on her heart, singing, “Can’t even take my daughter for a walk / See them by the corner store,” referring to the paparazzi and price of fame.

Following “Holy Grail,” The Carters radiated confidence as they shared personal tales of overcoming adversity. Jay-Z’s self-reflection presented itself best in his performance of “99 Problems” where he rapped in a bulletproof vest and dark beanie all while presenting mugshots on the screen, including those of Nicki Minaj, Snoop Dogg and himself. Toward the end of the song, blue and red lights covered the stage as Jay-Z shouted, “Hit me.” In a climate of police brutality, his story of overcoming stereotypes resonated well, especially for a song that is rather shallow at the surface.

Beyoncé then performed “***Flawless,” asking the Los Angeles audience how they woke up that morning and later bringing support for female sexuality on stage by asking if anyone was feeling naughty. She also displayed personal growth through the 2006 song “Resentment,” which shifted from a melancholy song to one of self-respect and confidence. Her powerful vocals resonated in the stadium while she sat on the edge of the stage’s runway in a lavish nude bodysuit. She sang the song about her partner’s infidelity, ending with a mic drop that represented her transcendence over difficult circumstances.

Beyoncé and Jay-Z’s duets stood out as highlights of the show. They performed hits including a mashup of Jay-Z’s “Family Feud” and Beyoncé’s “Upgrade U,” as well as their magnetic performance of “Crazy in Love.” However, the duo’s relationship shone through the most at the end of the show during a remix of Jay-Z’s “Young Forever” and “Perfect,” which Beyoncé recorded with Ed Sheeran. They sang to each other while family videos and footage of their wedding played in the background. The celebration of love and parenthood climaxed in the words “This is Real Love,” which appeared on the screen as the couple shared a kiss.

Beyoncé closed the show with “APESHIT” while the crowd went crazy, upon her request. The Mona Lisa was displayed in the background as a nod to the song’s music video set in the Louvre. Beyoncé asked the crowd to give it up for Jay-Z and Jay-Z asked the same for his wife. The crowd clearly favored Beyoncé and Jay-Z loved every minute of it.

“God bless you. Everything is love,” Beyoncé said before exiting the stage as the show came to an end. With raw moments and powerful messages, “On the Run II” was a triumph of the human heart and soul, reminding the audience of the capabilities of love.