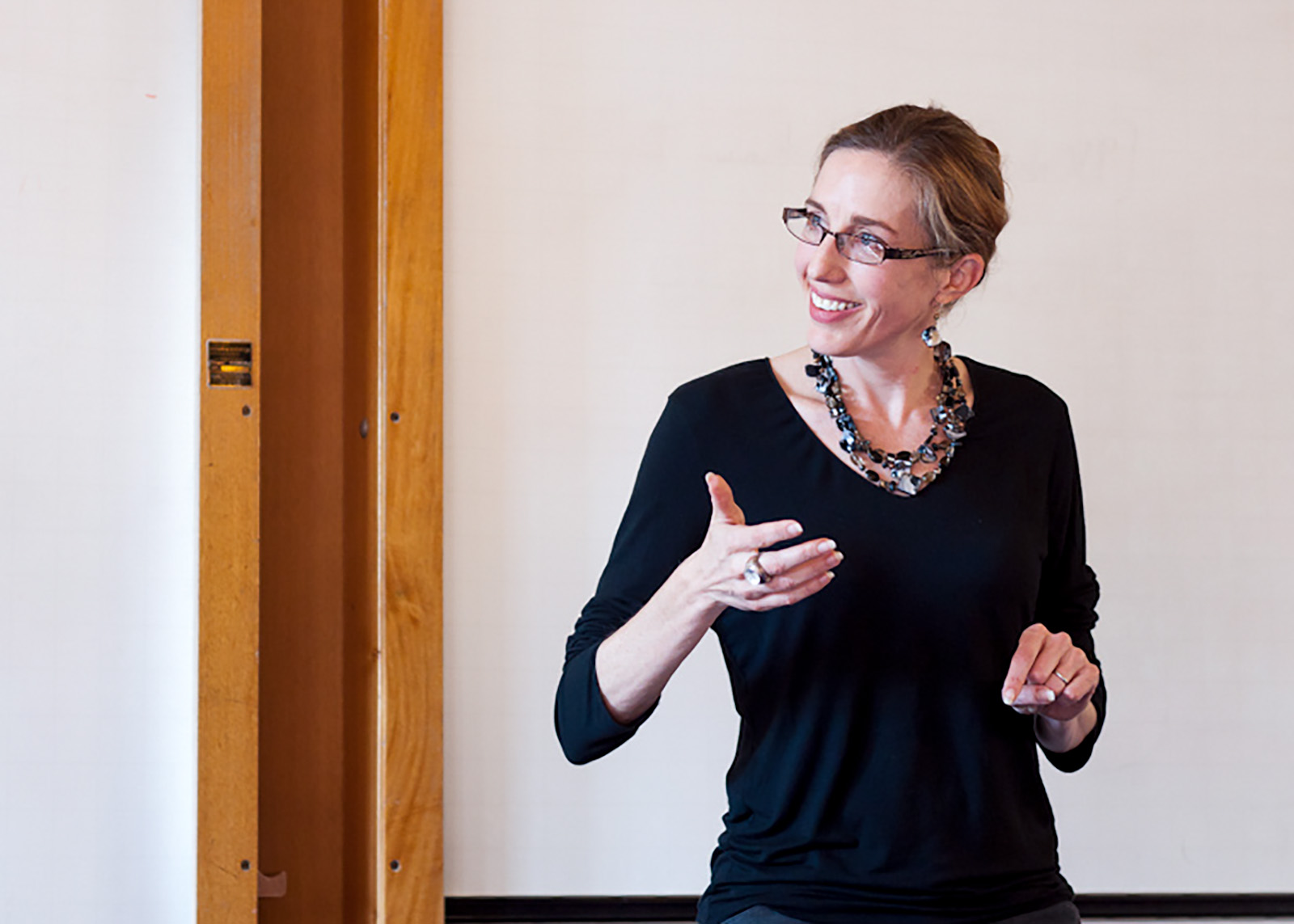 UCLA professor Pamela Hieronymi worked with Michael Schur, creator of NBC’s “The Good Place,” to integrate philosophy into his show. Her name is listed under “further reading” in “The Trolley Problem” episode.
(Photo courtesy of Gerard Vong)

Sharp-eyed fans of “The Good Place” might notice the name of UCLA philosophy professor Pamela Hieronymi listed as “further reading” on a whiteboard in the episode “The Trolley Problem.”

It’s not just a coincidence or a reference to her academic work – Hieronymi consulted on the show.

Hieronymi helped the show’s creator Michael Schur explore key philosophical and ethical topics that Schur later wove into the story. The NBC comedy follows a group of characters who die and are forced to reckon with their actions during their lives, and whether they deserve to be in the “Good Place” or the “Bad Place.” One of the show’s characters, Chidi Anagonye (William Jackson Harper), is even a philosophy professor, who takes it upon himself to share his knowledge of morality with the group. The show received Emmy nominations for Ted Danson’s role as Michael, the immortal being who designed the world they inhabit, and Maya Rudolph’s role as Judge Gen.

Hieronymi spoke to the Daily Bruin about her consulting experience, the integration of philosophy in the show and watching philosophy play out on television.

Daily Bruin: How did you first get involved with “The Good Place”?

Pamela Hieronymi: I got an email from Mike Schur asking if I would be willing to get together and talk to him about an idea he had for a TV show. … We met for coffee in my neighborhood and spent about three hours talking about his ideas. … And then there was a fair amount of time and as I was driving around Los Angeles, I saw billboards for a TV show and I thought, that’s got to be the TV show that we talked about.

DB: Was your conversation more of a lecture or did he come to you with specific questions?

PH: He had found me partly because of a section of a paper on my website about trying to be a better person. That paper took up a puzzle that arises out of Aristotle’s idea that you can become a better person by practicing doing what the virtuous person does … Why would you actually change your motivations? … He sort of sketched out the themes he was interested in exploring and we started talking about them.

(Schur) had this point system for how good you were in life and so one of the things we spent a lot of time talking about in that first meeting was divisions in moral philosophy between thinking about morality as a matter of doing good things or bringing about good outcomes … One of the philosophers that features in the show is (Harvard professor) Tim Scanlon’s book, “What We Owe to Each Other,” and Scanlon was my dissertation advisor, and that book is very much about the idea that we have to live in relationships in which we’re respecting one another and what would that look like?

DB: What were the challenges of coming at these topics from an academic background, while (Schur) was thinking from an entertainment perspective?

PH: He’s an extremely smart person and he thinks in terms of storyline and narrative and character. … I left the conversation feeling really good because I felt like I was able to take the things that I know and digest them for him in a way that was applied to the questions he was asking and he was also able to formulate his issues in a way that would connect with the things that I understood. … I do think that bringing academics into conversation, especially in the humanities, there’s a lot of possibility to bring some of the intellectual canon to bear on the creative process.

DB: How was the process different when you consulted on season two versus your initial conversation that you had prior to season one?

PH: The main difference is that there were a lot more people in the room. I was there at the NBC studios, (in the writer’s room). It was a much bigger conversation … We talked about the trolley problem for a while and then they were also interested in how Chidi was going to teach demons to be better.

DB: Were there any things that surprised you when you watched the show?

PH: All of it was surprising. I mean it’s really so fun. He said, “Yeah, you’ll see our conversation in the first half dozen episodes” and sure enough, I could see, there’s the things that are happening. Chidi’s indecisiveness is perfect. I do think that’s a professional hazard for philosopher is that we overthink everything, and so that was hysterical.

DB: What do you think about the way philosophy has been integrated into this narrative?

PH: I actually see it happening in two ways. There’s the most obvious way, which I think is the kind of product placement bit where Chidi has stuff going on on the blackboard and they show books and they actually talk about some of the classic problems and issues which show up in philosophy classes, which is so fun. It’s fantastic, and I hope students who have taken these classes recognize and see, there’s the trolley problem, there’s Aristotle and Plato and what have you. But then there’s another layer that doesn’t always match thematically what’s happening obviously – in the way that the characters are developing and in the way that the storyline is developing. I’m actually more gripped by what the writers have been doing with that deeper layer.