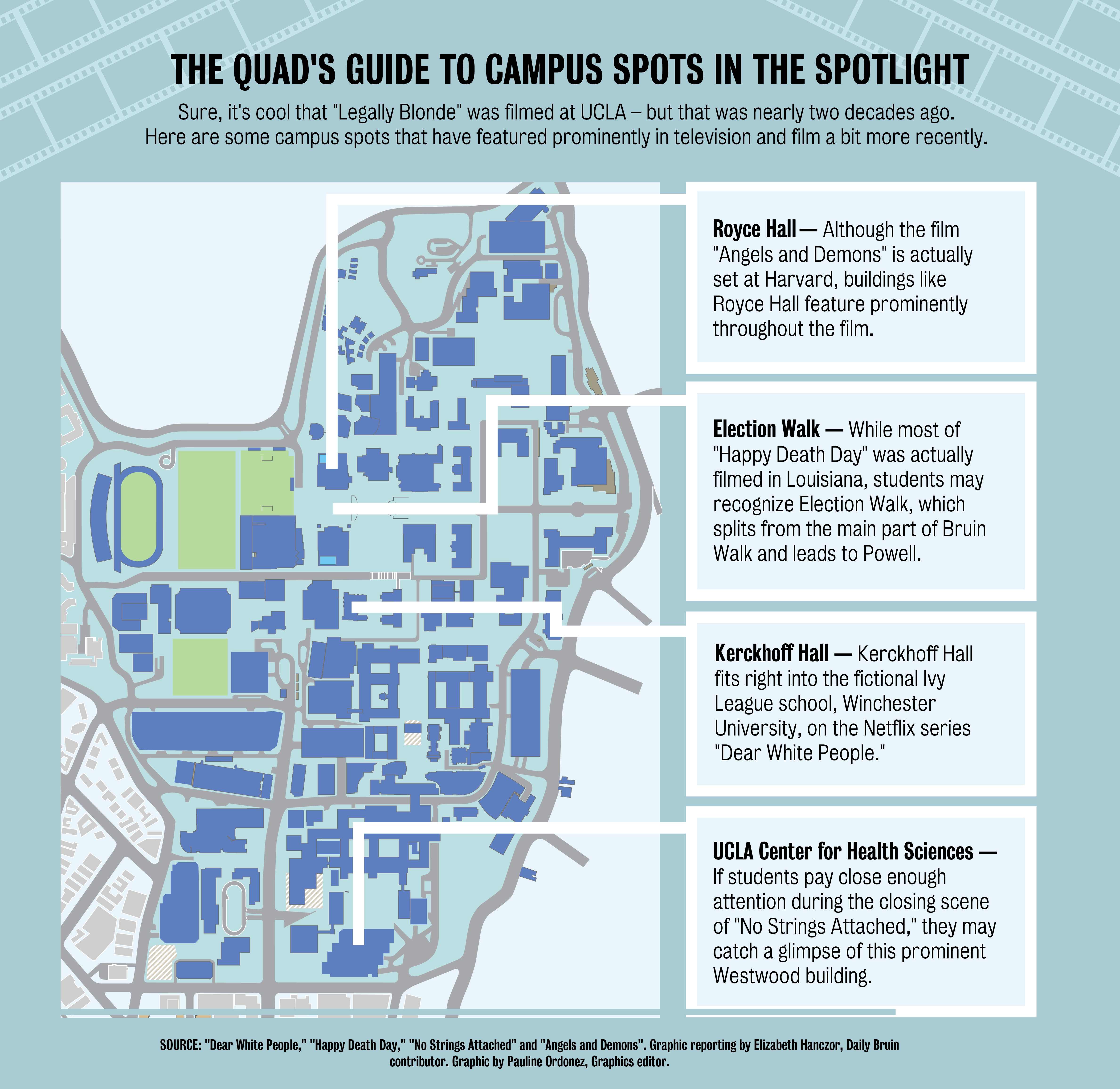 UCLA has been a movie and television-set hotspot for decades. Even for students who did not spot Janss Steps, Royce Hall or Kerckhoff Coffee House in a major Hollywood picture prior to arriving at UCLA, many saw the famous spots on their first tour of the campus.

Though titles like “Legally Blonde” are timeless and frequently come up in campus tour guides’ spiels about the school, there are a variety of other, more recent productions which continue to highlight UCLA’s vast and versatile campus. Here are some of the more current movies and television shows that students feeling homesick for UCLA can binge watch in the final weeks of summer.

Starting with the most recently filmed, the Netflix original series “Dear White People” tells the story of a group of black college students attending an institution primarily composed of white students. The show transforms UCLA into a fictional Ivy League school called Winchester University complete with some of the campus’ most notable pieces of Gothic architecture. Netflix subscribers may recognize campus hotspots like Kerckhoff Hall and the evergreen Dickson Plaza. However, UCLA students will only ever fully experience the faux autumn leaves and camera crews hovering about campus on the weekends.

After watching “Happy Death Day,” a movie about a sorority girl reliving the day of her murder over and over again, it would be easy to assume the beautiful red brick buildings are straight from the heart of Westwood – however, this would be a mistake. This film was actually shot primarily in Louisiana, specifically at Loyola University New Orleans. Still, students might recognize a few of the sets on UCLA’s campus, including a simple construction tunnel on Charles E. Young Drive and the Election Walk, the small pathway between Janss steps and Bruin Walk. The scenes filmed at UCLA go under the radar, proving the school’s cinematic versatility.

A Natalie Portman and Ashton Kutcher fan favorite, “No Strings Attached” tells a comical and complicated tale of two people falling in love unconventionally. Shot and set in Los Angeles, the film highlights the city’s most popular and telegenic locations like the iconic lamp posts at LACMA and behind-the-scenes shots of exposed sound stages.

The infamous ending scene utilizes a string orchestra and tight shots. However, as the sounds and visuals draw in the audience, one might also notice a glimpse of the UCLA medical center behind the main characters. Because the action of the film takes place in Los Angeles, UCLA being featured is not particularly unusual. Nevertheless, only a true Bruin would spot the exterior of the UCLA Center for Health Science in the background.

As the world continues to buzz over the exciting and somewhat controversial wedding of Meghan Markle and Prince Harry, let us not forget Kate Middleton and Prince William’s wedding. After the royals said their vows back in 2011, Lifetime released a movie based on their love story. In this television film, UCLA plays the role of the University of Saint Andrews in Scotland. The exterior architecture of Royce and Kerckhoff Halls, though iconic in itself, is easily camouflaged with some Hollywood magic.

Based on the Dan Brown novel, this film is a whirlwind mystery-thriller that involves the Illuminati, the Catholic Church and a successful Harvard professor. Staying true to the campus legend that UCLA has played Harvard more times than Harvard actually has, the film takes advantage of the impressive architecture on UCLA’s campus, focusing its attention on the arches outside Royce Hall. In one particular scene, a moving image of Harvard University replaces the view of the intramural field and the hill from the top of Janss Steps. However, the iconic Gothic colonnade does not go unnoticed.

This is only the beginning of a colossal list of movies and television shows that have been shot on UCLA’s campus. The various sceneries and timeless architecture make it easy for directors to capture both breathtaking and mainstream shots with just a slight movement of a camera. Unlike many struggling actors in Los Angeles, UCLA has never had a difficult time landing a role in Hollywood.