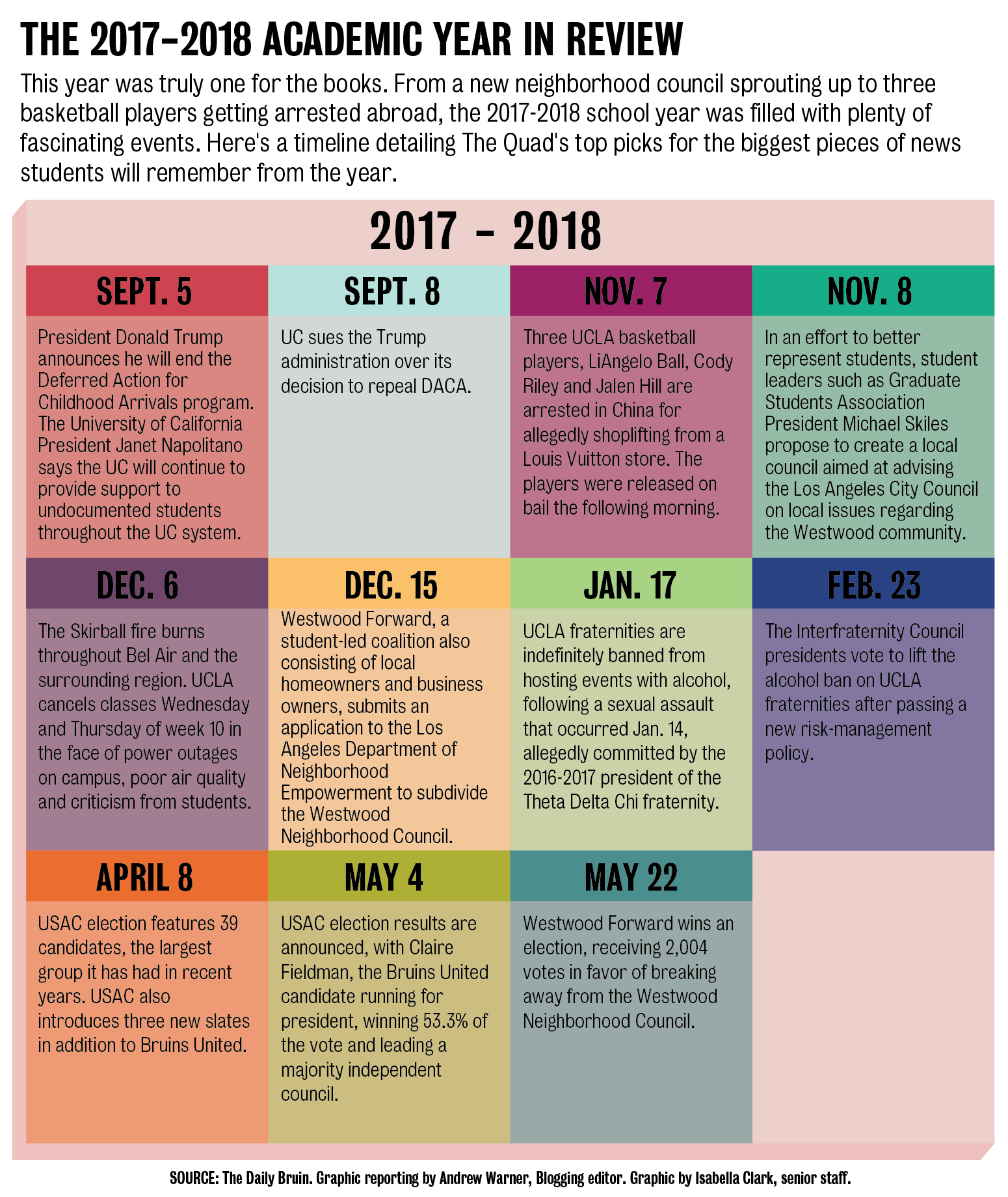 With fires edging dangerously close to our campus and mischievous basketball players drawing the attention of President Donald Trump, this school year was far from lackluster.

Though headlines throughout the year frequently featured the acronym “UCLA,” there is a personal underside to many of the events that reached our campus. Here are The Quad’s top picks for some of the biggest events that occurred this year.

Before the school year even began, the University of California filed a lawsuit against the Trump Administration for terminating Deferred Action for Childhood Arrivals on Sept. 8. The lawsuit claimed that the action is unconstitutional, violates the Due Process Clause of the Fifth Amendment of the United States Constitution and violates the Administrative Procedure Act.

The DACA program provides many UC students with the opportunity to receive an education. According to an article in the Daily Bruin, the UCLA administration protested in support of those affected by its impending termination. Gathering at the UCLA Labor Center, alumni, faculty and students moved across LA to protest in support of undocumented immigrants and students in MacArthur Park.

In the fall, students organized under Westwood Forward to promote the creation of a new neighborhood council in Westwood. The coalition of UCLA students, renters, homeowners and local business owners proposed a new council boundary line within the Westwood community. The boundary line subdivided UCLA, Westwood Village and the North Village from the existing Westwood Neighborhood council.

The North Westwood Neighborhood council proposition was designed to bolster student voice and representation in neighborhood decisions. The new neighborhood council was approved by a majority vote May 22. Students involved in the coalition said the council will aim to help manage housing prices and support nightlife in the area.

Three UCLA basketball players were arrested in China for shoplifting in early November. LiAngelo Ball, Cody Riley and Jalen Hill were held and questioned in China and released on bail a few days later. The players were indefinitely suspended from the team – amid the turmoil Ball left UCLA and signed with a Lithuanian professional basketball team.

The story of the basketball players made international news when President Trump solicited thanks from the players on Twitter for his role in their release. According to ESPN, the student-athletes’ releases had already been secured prior to Trump’s involvement.

On the morning of Dec. 6, students woke up to BruinAlerts and clouds of smoke in the distance. As videos of many commuters’ apocalyptic drives to work circulated, classes were canceled for two days due to road closures and poor air quality.

Students reacted strongly to UCLA’s response to the fire via Twitter and the UCLA Memes For Sick AF Tweens Facebook page. The majority of the reactions were rooted against class cancellations, with student grievances ranging from frustration at the lack of review sessions before finals to disapproval at the shortage of communication on that status of the fire and evacuation procedures.

UCLA fraternities were banned from hosting in-house events with alcohol in January. The ban was established in response to an alleged sexual assault committed by a former president of the fraternity Theta Delta Chi.

Though the ban was lifted late February, the way fraternity parties are held has been permanently altered – the Interfraternity Council now requires that each event has security at the door and a bartender to ensure students’ safety.

The Undergraduate Students Association Council, held their annual elections this spring. This year, three new slates were introduced alongside Bruins United – For the People, Leaders Influencing Tomorrow and Candidates Operating Clearly. Additionally, a referendum proposing the creation of an International Student Representative passed, and the role will be up for election next spring.

Members of the Bruins United slate, specifically Claire Fieldman, Bella Martin and Victoria Solkovits were accused of invading voter privacy and coercing votes. Many students shared their personal experiences of feeling ambushed at a Pi Kappa Phi event at a USAC judicial board hearing.

The Bruins United slate was sanctioned and banned from campaigning in the final hours leading up to the election. Martin, general representative elect, was initially disqualified. Jack Price, the USAC election board chair, overruled this decision, going against the USAC Election Board Ad-hoc Investigations Committee majority vote.

On Wednesday, the newly elected members of USAC were sworn in after a revote. The first vote to confirm did not pass, with a 3-4 outcome and three abstentions. However, the revote passed with a 6-2 result and two abstentions.