Wine About It: Pinot gris lives up to name as gray, dull, pond water-looking wine 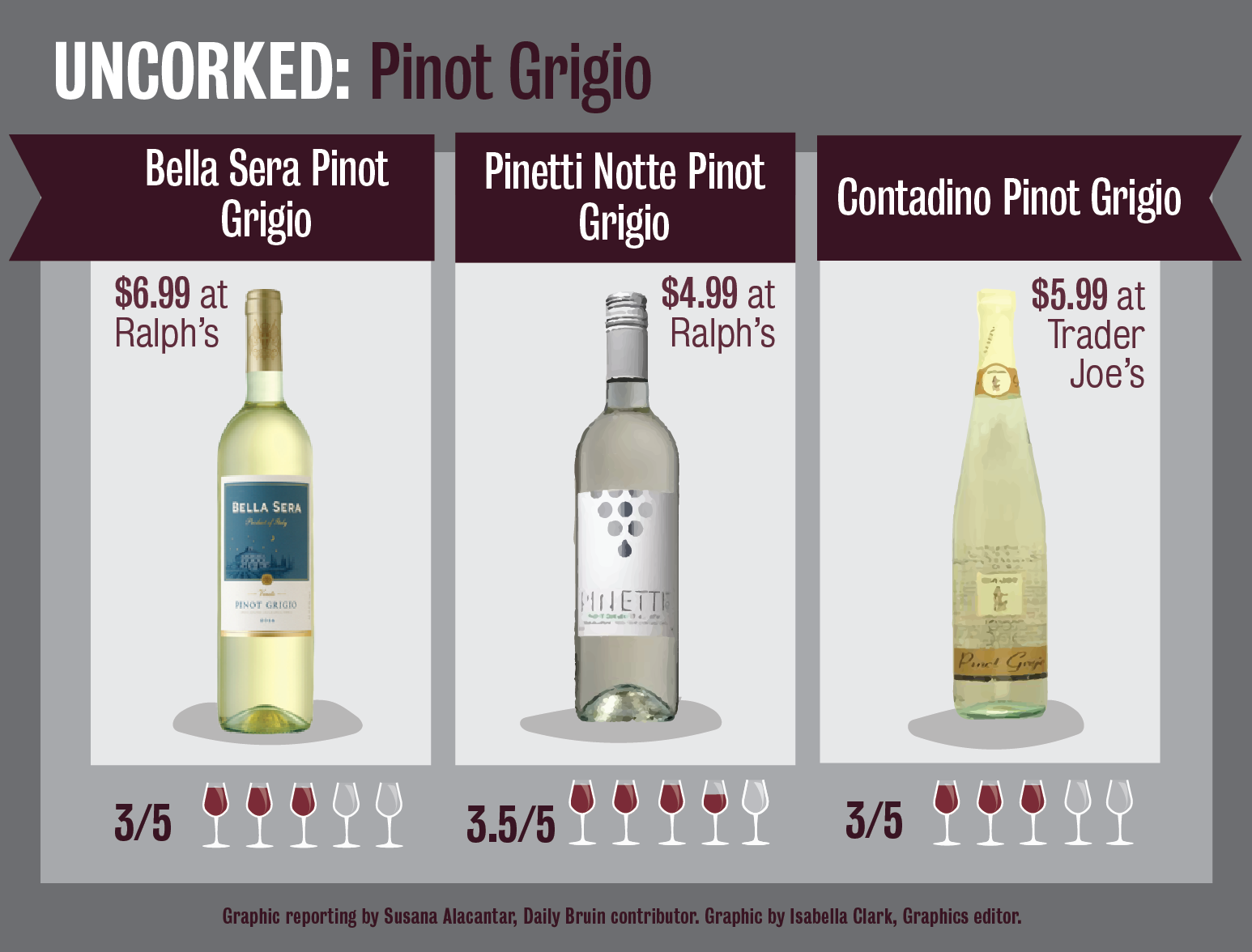 Pinot grigio is one wine with two names.

Often called pinot gris, the variety is a popular white wine whose grape originated in France. However, Italy has since taken over as the country that cultivates the most pinot grigio grapes.

I’ve always been curious to try pinot grigio. Every time I go shopping for wine, an endless number of options loom on the shelves of my local grocery stores. My friends from back home were visiting for the weekend, and since they had never tried pinot grigio either, I found myself in the perfect situation to try this white wine variety.

The first wine I purchased was Contadino Pinot Grigio from Trader Joe’s for $5.99. As I poured everyone a glass, I noticed the wine seemed bubbly, which instantly piqued my interest. It had a slight yellow coloring, but it was more of a neutral transparent than anything.

I started to smell the wine and I couldn’t really pick up on any distinct flavors. Since I was sick, I almost attributed the lack of scent to my clogged nose, but my friends couldn’t detect any specific flavors either.

It was slightly bitter and not as refreshing as I anticipated. It could’ve comprised a solid dry wine, but neither my friends nor I could get over its bitterness. We agreed a bottle of champagne would’ve been better.

We opened the second bottle of wine, Pinetti Notte Pinot Grigio from Ralphs for $4.99, hoping it would taste better than the first. It was very similar in color to the Contadino, although it had more of a light green tint that reminded me of pond water. Unlike the Contadino, I was able to smell subtle fruit flavors such as peach and melon; however, I could only taste the former.

The wine lacked flavor and was a bit too acidic, resulting in an uncomfortable feeling that lingered in my throat. However, overall, I enjoyed it because of its crisp and dry flavor profile. My friends and I managed to finish almost the entire bottle before we moved on to the next option: Bella Sera Pinot Grigio.

I bought the Bella Sera at Ralphs for $6.99. It was similar in color to the previous two, but definitely the most saturated yellow of the day’s tasting. Unlike wines I’ve encountered over the quarter, all three options were almost identical in color.

The Bella Sera’s scent was also the most potent out of the three – I could tell as soon as I popped open the bottle and got a whiff of fresh apples. Matching its smell, the taste featured a mixture of apple and citrus flavors. However, it was a bit too acidic, bitter and dry for my liking.

My friends and I all agreed the Pinetti Notte was the slightly better option out of the three and the only one I drank a second glass of. However, I have to say I’m a bit disappointed that I didn’t fall in love with any of the three varieties. Maybe I didn’t purchase the best options, but my friends and I agreed that none of us are pinot grigio fans – at least for now.