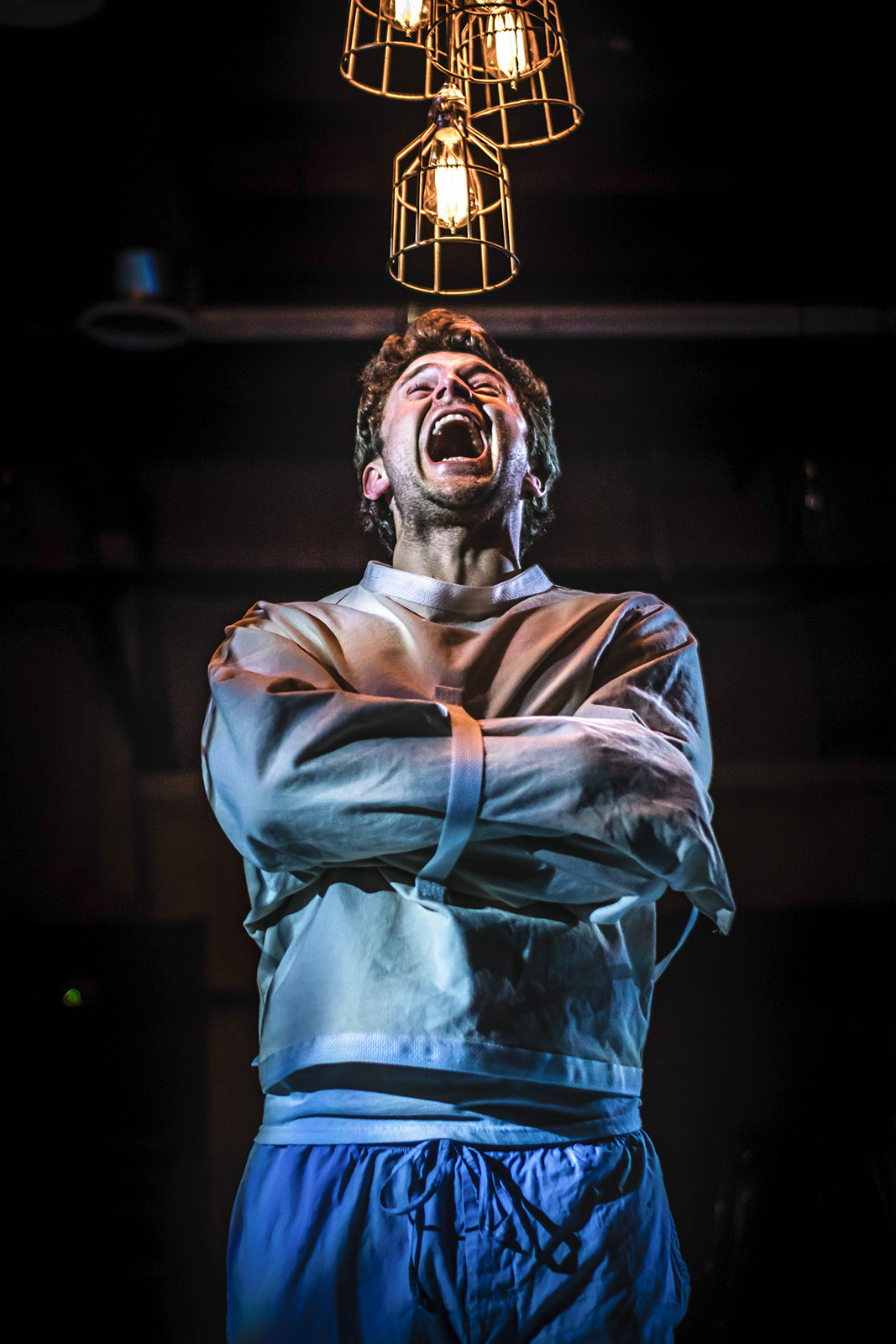 Actor Mick Torres performed in the After Hours Theatre Company’s presentation of Dale Wasserman’s stage play of “One Flew Over the Cuckoo’s Nest.” Alumnus Graham Wetterhahn produced the interactive experience, which he said allows guests to feel as though they are being checked into a mental hospital. (Photo courtesy of KJ Knies)

Theatergoers put on light blue hospital gowns and transformed into psychiatric patients from 1963 as part of an immersive performance Friday evening.

After Hours Theatre Company presented Dale Wasserman’s stage adaptation of “One Flew Over the Cuckoo’s Nest,” based on the novel by Ken Kesey, in a Burbank warehouse decorated to look like a 1960s psychiatric hospital. Alumnus Graham Wetterhahn, the show’s artistic director and producer, said the interactive experience begins with audience members being treated as if they are checking into a mental hospital as soon as they approach the ticket table.

The first hour of the experience was dedicated to the pre-show, in which audience members were given new identities as patients and asked to change into light blue hospital gowns and nursing uniforms. Viewers could choose to be chronic patients, who model a traditional spectator experience, or acute patients, who interacted with the actors on stage. The stage layout included elevated seats on the right and left for chronic patients, and game tables and hospital chairs located on the ground-level stage for acute patients, who could move around and change seats throughout the play.

While standing in line outside waiting to check in, audience member Jennifer Cormano said she was impressed by how the interactive experience expanded on details mentioned in the book. As she waited to get in, she witnessed a riot caused by a character described in the book as simply “a real firecracker.”

“This is actually trying to give you that experience of a patient, and that I think is something that changes your perception of the play, … putting (us) back into that time and space … and out of our normal everyday reality,” Cormano said.

After checking in, visitors received a wrist band with a made-up name, date of hospital admittance, blood type and ID number. When the actors asked the spectators their names, the spectators responded with the patient name written on their wristband. The interior of the hospital welcomed participants with light bulbs in bird cages hanging from the ceiling, an odor of tobacco and soft background music.

Visitors either gambled for “secrets” by playing Go Fish with Dale Harding, an acute patient who admitted himself into the hospital, or searched with delusional Martini, another acute patient, for his hidden doll. Engaging in collective behavior, such as voting for protagonist Randle McMurphy’s proposed change in TV-watching time or dancing during the party scene, was also encouraged.

Because a lot of the depth and complexities of the characters in the book get lost in translation during the play, Wetterhahn said, the pre-show is designed to help the audience understand and connect to the characters.

“If you have a really good experience with Harding (in the pre-show), the rest of the show you’re going to be rooting for Harding,” Wetterhahn said. “So you delve into the scene in connection with the characters, and you get to know them as a human and it makes you a lot more engaged in the show.”

Audience members interacted with the set in addition to the characters. Attendee Rick Manina said he chose to be an acute patient so he could spend more time close to the stage. At one point Manina pretended to be a patient sitting in a wheelchair he found on the set, which he rolled to the front of the stage until the actors rolled him back, he said. Manina said he appreciated the 1960s details on the set he remembered from his childhood, such as a telephone with a dial, Silly Putty and Slinkies.

“As much as possible, I like to be close to the stage,” Manina said. “It was almost like being in a ballroom, (it was) very well orchestrated. … It kind of makes you wonder, ‘Am I (a) little crazy?’”

Wetterhahn said the play’s psychiatric-ward setting and general stage directions make it an excellent script for an interactive experience. After reading the script, he said he could immediately see the audience’s role because the script often does not specify which characters perform specific actions, such as when the ensemble receives pills from the nurses.

“People expect when they are immersed in something for it to be, not necessarily scary, but a little bit creepy, … heightening the adrenaline and the emotions of the events,” he said.