Wine About It: Dessert wines deliver a sweet counter to arid desert dries 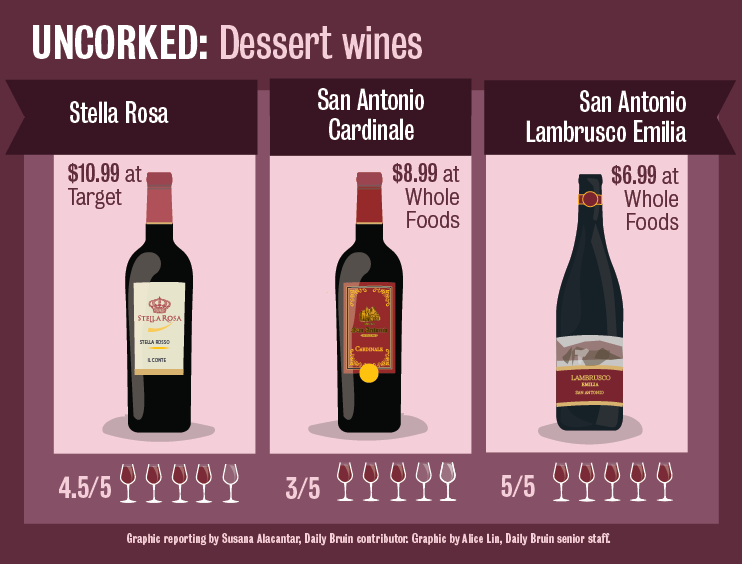 Dessert wines are best paired with food, particularly pastries, because they help enhance their flavor. Although I usually prefer wines that are only slightly sweet, sometimes I do crave something that tastes a little more like juice, especially if I am planning on having a couple of glasses.

Stella Rosa was one of the first wines I ever tried, and I immediately fell in love with it. However, it had been a while since I’d had a glass, and I wondered if it would live up to my memories of it.

I uncorked the bottle, which cost $10.99, and instantly smelled a great combination of strawberries and other red berries. The scents were not overbearing, which meant the flavors wouldn’t be either – even though it’s a dessert wine I didn’t want it to taste like I was drinking pure sugar.

Although the color had a red base, the strong berry hue made it stand out as most of the red wines I’ve tasted only had a subtle purple tinge, if any color. Once I tasted the wine I was immediately reminded of why I had loved it in the first place – I tasted the sweetness of the berries and it was refreshing.

The second wine I bought was San Antonio’s Cardinale red for $8.99 at Whole Foods. The color of the wine was a more traditional red with burgundy tones, which was rather unexciting. As I poured myself a glass I smelled sugar, but unlike the Stella Rosa I couldn’t make out anything other than a generic scent that reminded me of packets of artificial sweetener.

I tasted the wine and wasn’t impressed. The description on the bottle said it was supposed to be a refreshing dark red wine, but I all I could taste was sugar, without any of the fruity notes I desired.

The final wine I tried was San Antonio’s Lambrusco Emilia, which I also bought at Whole Foods for $6.99. A note on buying wine at Whole Foods: the store offers limited options for under $15. The majority of their wine selection sits above $20, so I was surprised to find not just one, but two inexpensive wines.

The Lambrusco differs from the previous two in that it’s a sparkling red wine, which I had never tried before. As I poured myself a glass I noticed the bubbliness right away, although it’s not as carbonated as regular sparkling wines such as Champagne. In terms of the color, it had an almost identical hue to the deep red of the San Antonio Cardinale wine. The smell was also similar to the Stella Rosa, but I sensed some more robust cherry flavors.

As I drank the wine, I felt it fizzle in my mouth and picked up on several fruit flavors including strawberries, blueberries and cherries, all of which were well-balanced and not overpowering.

However, what I liked the most about the wine was its perfect combination of sweetness and alcohol. I tasted both in every sip without feeling overwhelmed by either, a balance I’ve been searching for since I started drinking wine.

Without a doubt, the Lambrusco was the best out of the dessert wines I tried. It has everything a wine lover could dream of: great flavors mixed with a nice balance of alcohol at a cheap price.