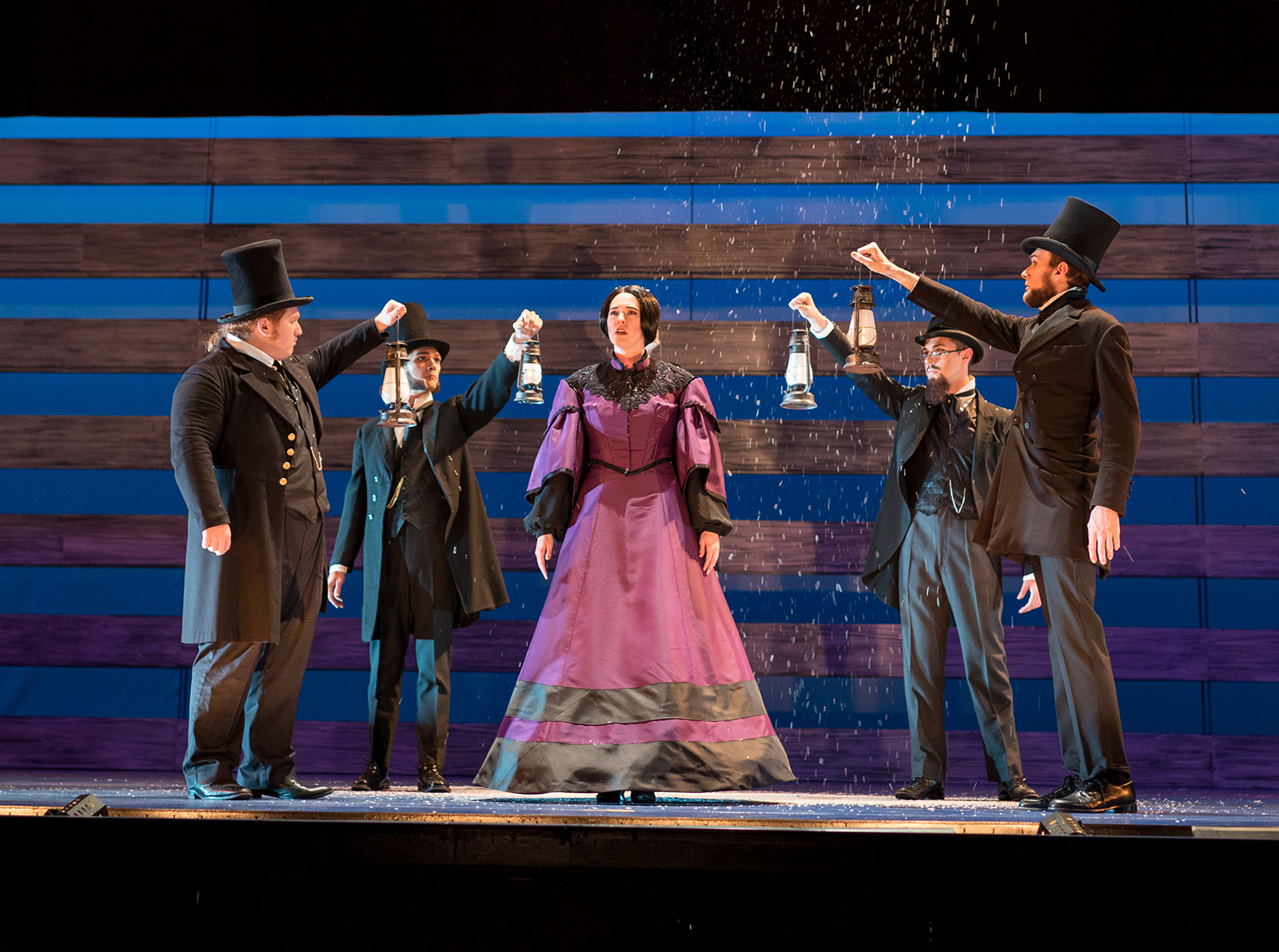 Upcoming opera “The Mother of Us All” depicts feminist figure Susan B. Anthony and her fight for the women’s right to vote. Although the show deals with historical events, its commentary on women’s struggles is relevant even today, said director Michael Hackett, former chair of the theater department. (Chengcheng Zhang/Daily Bruin)

"Mother of Us All"

Michelle Drever said she can’t help but tear up as she sings the words of Susan B. Anthony.

Drever, a graduate voice student, is one of three women portraying the suffragette in the UCLA School of Theater, Film and Television’s upcoming show, “The Mother of Us All.” The opera, which follows Anthony’s life and legacy as she fought to earn women the right to vote, is a collaboration between Opera UCLA, UCLA Philharmonia and the UCLA Herb Alpert School of Music, and will premiere Friday at the Freud Playhouse.

First performed in 1947 by Gertrude Stein and Virgil Thomson, the opera spans more than 100 years of history and integrates a multitude of American figures, such as former President Ulysses S. Grant from the late 19th century and former Secretary of State Daniel Webster from the early 19th century. Despite the historical nature of the piece, Drever said Anthony’s transformation from a young, struggling woman into a feminist icon remains pertinent to modern American life.

“This piece is strikingly relevant to what our society is going through today. It’s bittersweetly topical,” Drever said. “When people come to see this, they will be reminded of the fight women had to endure and are still fighting.”

Professor Michael Hackett, former chair of the theater department and the show’s director, said “The Mother of Us All” follows Stein and Thomson’s version of Anthony’s impact on American society as she became the face of the early feminist movement. By integrating characters who would not have interacted with Anthony in her lifetime, such as former President John Quincy Adams and Webster, Hackett said the composers were able to consider Anthony’s position as an American icon in relation to other, predominately male figures throughout history.

The narrative integrates Stein and Thomson as commentators who remark on the patriarchal nature of the historical figures in the opera, said Grace Martino, a second-year voice performance student who portrays Stein. They address the audience frequently and often comment on the narrative, labeling Webster as a symbol of the patriarchy for instance. Performer-audience interactions allow the audience to establish a stronger connection to the historical story, Martino said.

The historical nature of the show also shines in the elaborate costumes that distinguish characters according to their time period, said costume designer Maddison Carroll. The graduate costume design student said the female characters from the early period of Anthony’s life wear large, hooped petticoats, while the women from later ages in Anthony’s history wear bustle skirts, reflecting trends in attire. Most of the characters remain in the same costume throughout the show, sporting a color palette of black, white and navy blue.

Anthony’s costume, however, switches from a large petticoat to a bustle skirt, white wig and round spectacles, reflecting her transformation into a more independent woman, Carroll said. In the last scene, her character dons a veil while people lay flowers at her feet. The costuming choice imitates the depictions of Madonna in Christian art, drawing parallels to another iconic woman from history.

“When most people think of Susan B. Anthony, they think of her with gray hair and small spectacles,” Carroll said. “We see her shift in that way, and nobody else transforms as she does.”

Though “The Mother of Us All” depicts issues from the past, such as women’s lack of political agency, Hackett said the story’s relevance endures. In portraying the ways in which men barred women’s attempts at suffrage, the opera depicts men’s fear of women’s increased power, as well as the destruction and suffering caused by such fear, he said.

Hackett said similar issues exist today in the form of threats to women’s reproductive rights by many current politicians. Theater reflects the present, he said, so modern audiences will interpret it in a way that allows them to apply it to their own lives. The opera narrates the story of women learning how to make their voices heard – an obstacle that persists today, Martino said.

“When you dress down the show, the emotions and the desires of the show are still very true to how women, and any other oppressed group, may feel and how (Anthony) herself felt,” Martino said.

Anthony did not live to see women gain the right to vote, and the right has been legal for less than a century. But in presenting Anthony’s struggles to a relatively reformed America, Drever said she hopes the opera inspires others to continue supporting women’s rights.

“Even though it presents an America that’s far from perfect, it’s still a love letter to this nation and to what it stands for,” Drever said.