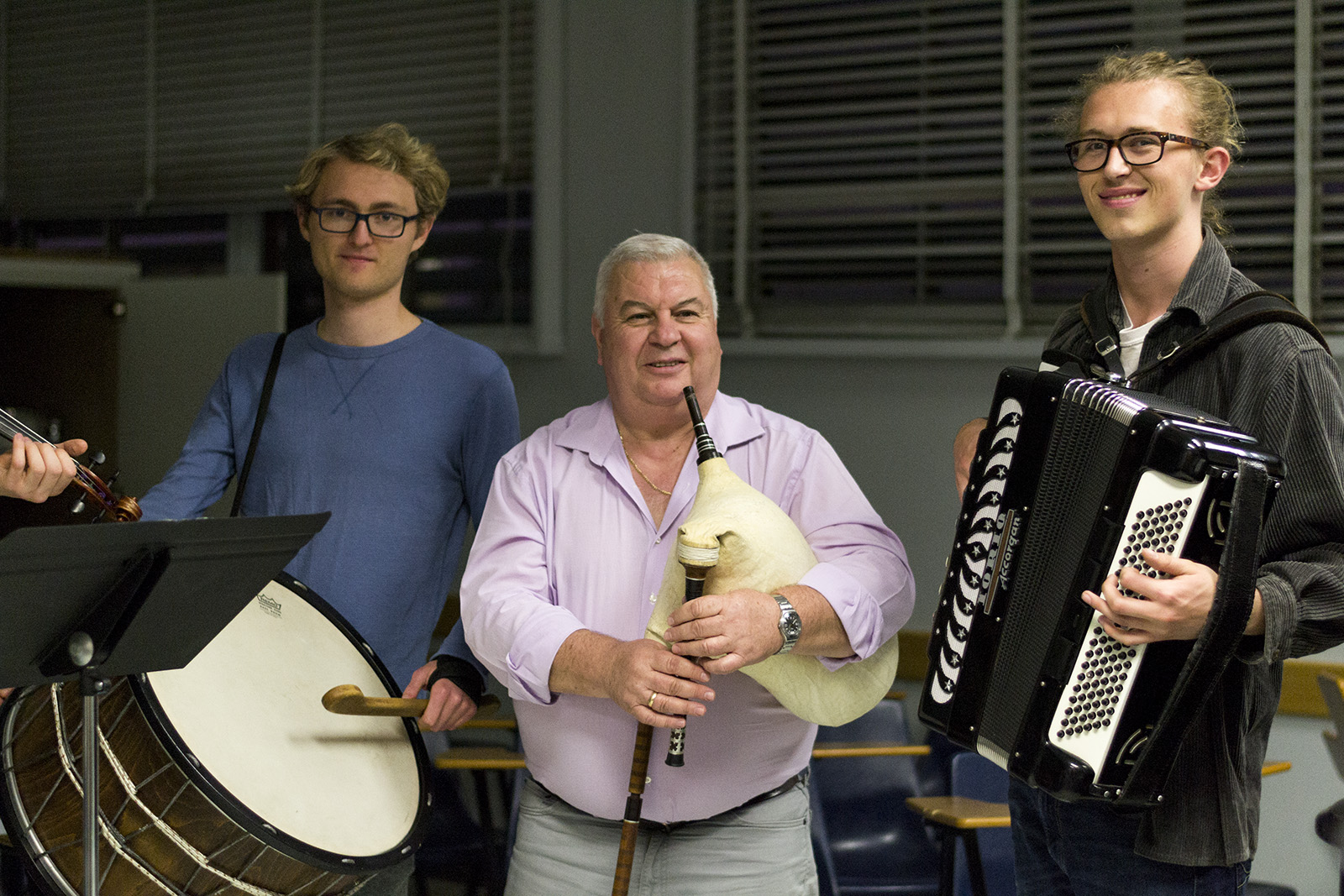 The UCLA Herb Alpert School of Music’s department of ethnomusicology offers a range of different ensembles spanning multiple regions throughout the world, each with a rich musical dynamic and sound. In “Global Melodies” the Daily Bruin will feature various world music ensembles within the department in an effort to showcase the diversity of music within the school.

The blare of a bagpipe and reverberation of a violin ring through the halls of the Schoenberg Hall on Monday nights.

The sounds echo from Schoenberg 1440, where the Music and Dance of the Balkans Ensemble rehearses. Under the direction of adjunct associate professor Ivan Varimezov and adjunct professor Tzvetanka Varimezova, a husband-and-wife duo from Bulgaria, a group of 25 to 30 students learn to perform traditional and contemporary Bulgarian folk music. Although the ensemble predominantly focuses on Bulgarian music, it also draws musically and stylistically from Bulgaria’s bordering countries, Varimezova said. Students therefore have the chance to learn about the differing music styles of many Balkan countries.

“History of our culture and our past is in the music,” Varimezova said. “We translate the music for them, and (the students) know what they’re singing for.”

Varimezov and Varimezova moved to the United States from Bulgaria in 2001 to teach Bulgarian music. Varimezov, a well-known player of gaida – Balkan bagpipes – conducts the instrumental portion of the ensemble, while Varimezova, a solo singer and former second conductor of the Bulgarian National Ensemble of Folk Song and Dance, leads the choir. After rehearsing separately in neighboring practice rooms, the choir joins the instrumentalists to create a cohesive sound that blends two- and three-part harmonies with asymmetrical rhythms.

The instrumental section consists of seven distinct instruments: the accordion, the gadulka – a Bulgarian folk violin – the gaida, the keyboard, the tapan – a large, over-the-shoulder drum – the violin and the bass. However, the ensemble features new instruments every quarter, depending on the students’ interests, said Isabel Dobrev, a first-year ethnomusicology student.

Dobrev said Varimezov accepts all instrumentalists who want to join, and writes musical parts for them based on their instruments. In past years, the ensemble featured a clarinet and a saxophone, two instruments that are not found in traditional Bulgarian music, Dobrev said.

Dobrev is a second voice in the choir and a bass player in the instrumental ensemble. She practices with both groups, alternating between the two every other week. When it comes time to perform, Dobrev said she stands at the edge of the instrumental section and plays bass while singing along to the lyrics in front of her.

Although Dobrev is Bulgarian herself, she said she was not familiar with the style of Bulgarian music and its use of ancient dialects taught in the ensemble.

“I had heard (Bulgarian music) growing up from my family, but this is a traditional style so it’s not really pop,” Dobrev said.

Another student in the ensemble, Nathan Bernacki, a second-year ethnomusicology student, plays gadulka. Although Bernacki is American, his mother was part of a Bulgarian folk dance troupe, which sparked his interest in Bulgarian music at a young age. After first playing the cello and the accordion, he decided to try his hand at the gadulka, a more traditional Bulgarian instrument, in high school. Bernacki said being a part of the Balkan music ensemble has taught him how to share melodies with other instrumentalists.

“When I first started playing, it was more personable because I would drive to (my instructor’s) house and play in his living room,” Bernacki said. “At UCLA it is a little bit more catered to the amount of people that are (in the group).”

Varimezova said one of the main aspects of Bulgarian music that differentiates it from popular U.S. music is its unusual time signatures, which allow for the incorporation of irregular rhythms not traditionally found in U.S. music. For example, most U.S. songs often feature four beats per measure. But in the Bulgarian music that Varimezova and Varimezov teach, it is not uncommon to see a song that follows seven beats per measure.

The asymmetrical rhythms initially confuse some students, but Varimezov said dancing helps the students to find the rhythm. By occasionally teaching the dances that go along with the music, Varimezov helps students make connections between the steps and the rhythm, Varimezova said.

Varimezova also demonstrates the vocal techniques that differentiate Bulgarian singing from other widespread styles, such as opera. By adding tunes to her regular speaking voice, Varimezova said she trains her students to replicate the traditional Bulgarian style of singing.

Varimezova teaches a cappella songs, a popular unaccompanied singing style in Bulgarian folk music, as well as accompanied songs. While Varimezova selects smaller groups to perform a cappella songs, Varimezov also arranges instrumental pieces to complement the vocals. “Prez Gora Varvjaha” is a traditional song customarily performed by an a cappella, but Varimezov arranged an instrumental accompaniment to layer with the vocals of the choir.

Even beyond the classroom, Varimezova said she aims to help bolster students’ musical confidence and skills by sending them music and aiding them outside of the curriculum. After being a part of the ensemble, she hopes students will feel they have learned something valuable about the culture and history of Bulgaria that is interwoven throughout the music, and use this knowledge in their future musical endeavors, she said.

“(Students) were able to take pieces of our classes, like seeds, and plant them somewhere and have a big tree,” Varimezova said.