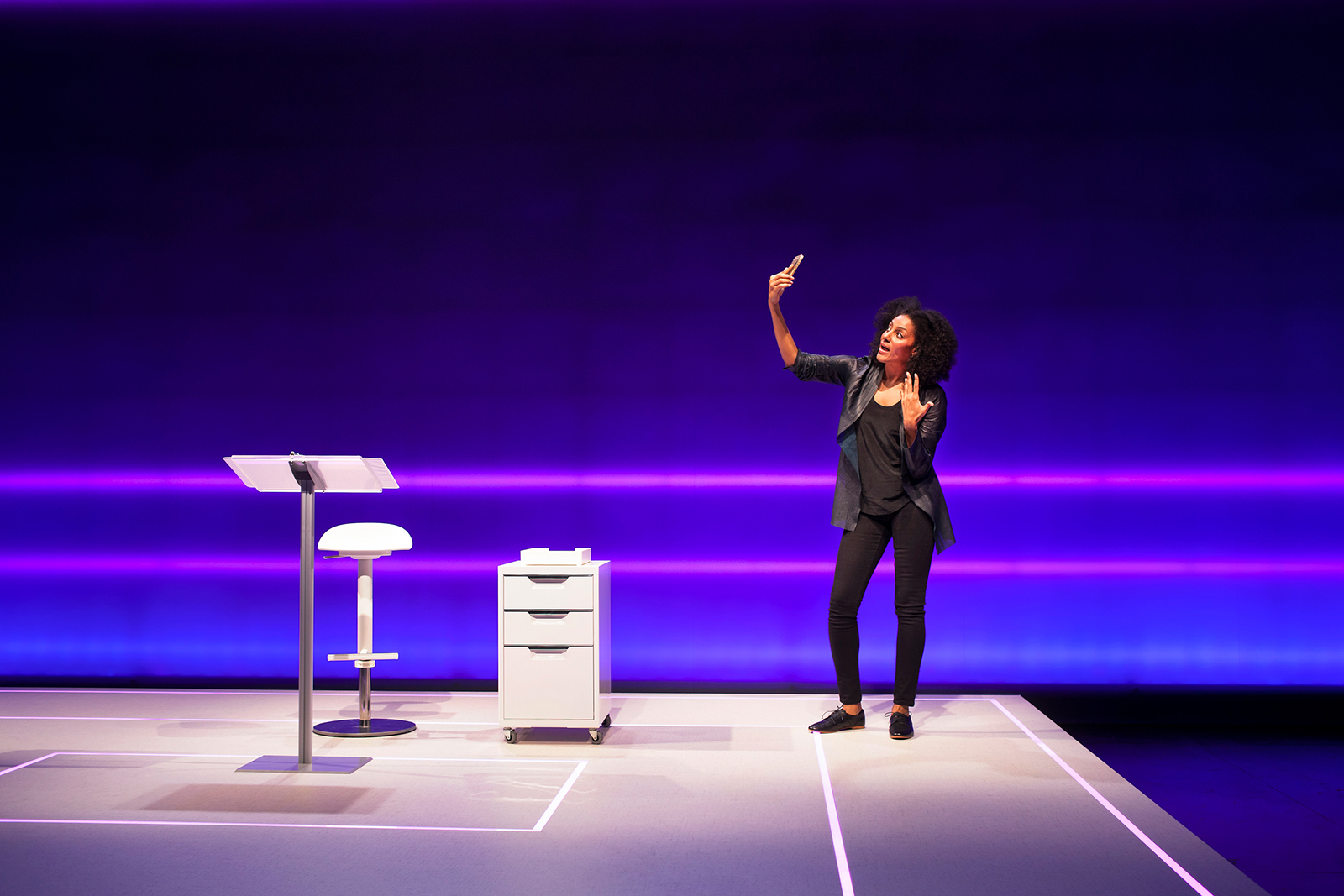 “Sell/Buy/Date” features an elderly woman, a Jamaican sex worker and a former pimp, all played by the same person.

Running March 7 through April 15 at the Geffen Playhouse, “Sell/Buy/Date” is set in a futuristic society in which a British university professor named Serene Campbell teaches a class about people’s experiences as sex workers from the early 1990s to the 21st century. Tony Award winner Sarah Jones portrays multiple characters with a wide range of backstories, creating a nuanced and gripping narrative that depicts positive and negative experiences of working in the sex industry.

Professor Campbell serves as the narrator of the play and introduces each character and their story. Though she is the central character, most of the play focuses on the stories she shares with her class. Jones switches on and off between Professor Campbell and the other characters, using different accents and subtle costume changes to effortlessly embody each persona.

But the play takes a darker turn when two new sex workers are introduced. The first is a Trinidadian woman who pretends to be Jamaican in order to attract more clients. She delivers an impassioned monologue about how people criticized her line of work without acknowledging that her job allows her to provide her children with a comfortable life. The tone turns even more somber as Jones transforms into a former prostitute who ended up pregnant, with no support from the father of her child. Both women’s stories show that working in the industry goes beyond having sex with someone and getting paid for it – the occupation has deeper implications for people’s personal lives.

Jones also plays multiple male characters, some of which include a man outside a strip club, a former pimp turned motivational speaker and a man who owns brothels. Most of the men’s commentary is sexist, which helps the play represent the idea that women in the sex industry are objectified through misogyny.

The play also addresses the impact of race and socioeconomic background in the sex industry. Many of the sex workers in the play are people of color, while most of the characters who comment on the sex workers’ activities are white. This distinction makes it clear to audiences that people from marginalized communities are more likely to work in the industry, while those who are not are more likely to enjoy the benefits of it, unharmed.

Whether they are respectable or morally questionable, every character Jones plays has a purpose in the show – to reiterate the central theme of the objectification of women. Even characters who consent to being sex workers recognize they are giving men sexual pleasure, perhaps harming themselves in the process.

Though every character helps develop the idea of objectification, the play could have better explored its main theme by delving deeper into some of the characters’ stories. Jones spends only a couple of minutes on each vignette, often switching from one person to the other without giving details that could have solidified their characterization. Spending more time with certain characters would allow the audience to develop firmer opinions about the treatment of women in the industry.

Despite its few flaws, “Sell/Buy/Date,” successfully captures the voices of multiple characters from a variety of backgrounds. Jones’ skilled performance captivates viewers and provides an uncommon view into the sex industry.