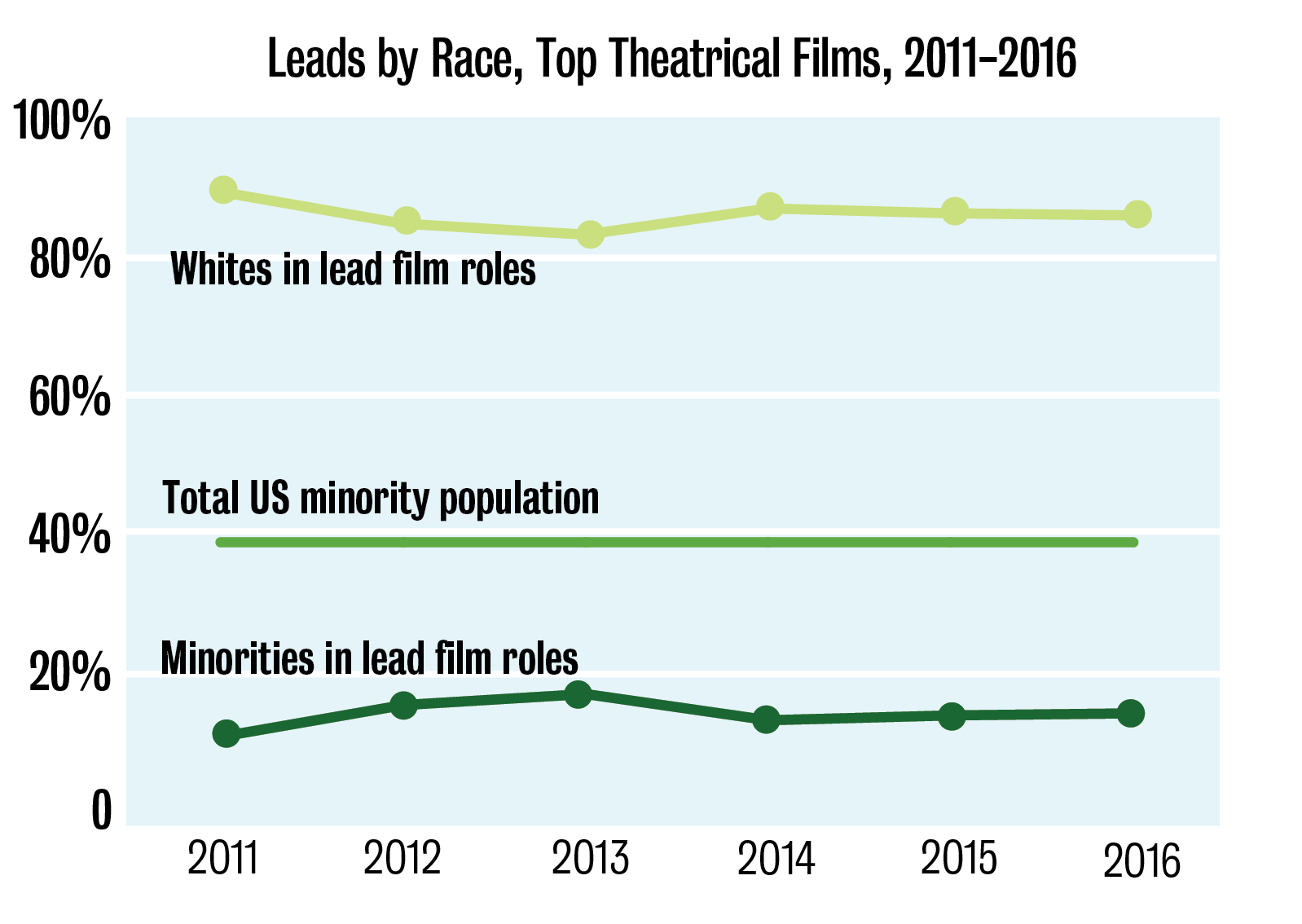 This year’s Hollywood Diversity Report confirms the film industry has continued to fall short in its representation of the United States’ population.

Data shows the film industry disproportionately underrepresented women and people of color throughout both film and television, despite evidence that diversity sells.

The Hollywood Diversity Report, released by the UCLA Institute for Research on Labor and Employment, marks its fifth annual installment in the research series that examines racial and gender diversity in the film industry. This year’s report looks specifically at the 2015 to 2016 television season and the top-200 grossing films of 2016, comparing the numbers to data from previous reports. The report, subtitled “Five Years of Progress and Missed Opportunities,” was released Feb. 27 and finds relatively slow and minimal progress in both film and television for people of color and women, said report co-author and sociology doctoral student Michael Tran.

“We have to be quite careful about saying that because once people hear the words, ‘There’s progress being made,’ then they think they can throw up their hands,” Tran said. “There are still vast amounts of underrepresentation in almost every arena that you can get, we’re just saying that there’s positive steps.”

According to the report, television has made more substantial progress than film. Broadcast scripted television in the 2015 to 2016 season featured leads that were 18.7 percent minority, a 7.3 percent increase from the previous year. The sample included minority-led shows like “black-ish” as well as shows with white leads but diverse ensembles, such as “Blindspot.” By contrast, 2016 films had 13.9 percent minority leads, only a 0.3 percent increase from the previous year. The trends are a testament to the rapidly changing frontier of television, said Ana-Christina Ramón, report co-author and director of Research and Civic Engagement for the Division of Social Sciences at UCLA.

“A movie usually takes at least two to three years to really go from inception and greenlight to getting it into the theaters so because it’s a longer process, it could take a little bit longer for you to see change happening,” Ramon said. “I think there is some change that I think we will be seeing soon because of the recent examples of diverse movies that have been doing so well.”

Recent films such as “Black Panther,” which came out 11 days before the study was published, help underline the argument the report makes: Diverse films are, in fact, financially successful, Tran said. The report found, on average, films that featured casts with 21 to 30 percent minority actors were most financially successful in 2016, grossing an average of $180.8 million. Current “Black Panther” box office totals are close to $1 billion worldwide as the film is slowly becoming one of the highest-grossing films ever.

“Black Panther” could serve as a turning point for diversity in film, said Darnell Hunt, another co-author and dean of the Division of Social Sciences. Earlier films like “12 Years a Slave” and “Moonlight,” as well as Halle Berry and Denzel Washington’s 2002 Oscar wins, were heralded as revolutionary. However, they still didn’t bring about structural change in Hollywood as many thought they would – “Black Panther,” on the other hand, may do so because of its scale of success, he said.

The difficulties in creating lasting and meaningful change can be attributed to the structure of the film industry, Hunt said. Even today, white men have dominated decision-making positions within studios, leaving the industry structured in a way that disadvantages women and people of color, he said.

“I think the big frontier for the industry is going to be to figure out how to disrupt the structure that’s been in place for a long time,” Hunt said. “How to get more people of color and women into the executive suites … which will have a trickle-down effect on pretty much every other area of the industry.”

The report serves more as a source of knowledge than as a set of instructions on how to diversify the industry. Tran said he hopes the data will help dispel misconceptions about women and people of color in film and create a clear picture of how far Hollywood has to go.

“Our goal is to create objective data, irrefutable knowledge … maybe dispel some of the myths and really give a picture of the situation,” Tran said. “What I hope is that the people who have a stake in it, who have a vision for how they want Hollywood to look … really pick it up and run with it, because it’s really for people out there trying to make a change.”