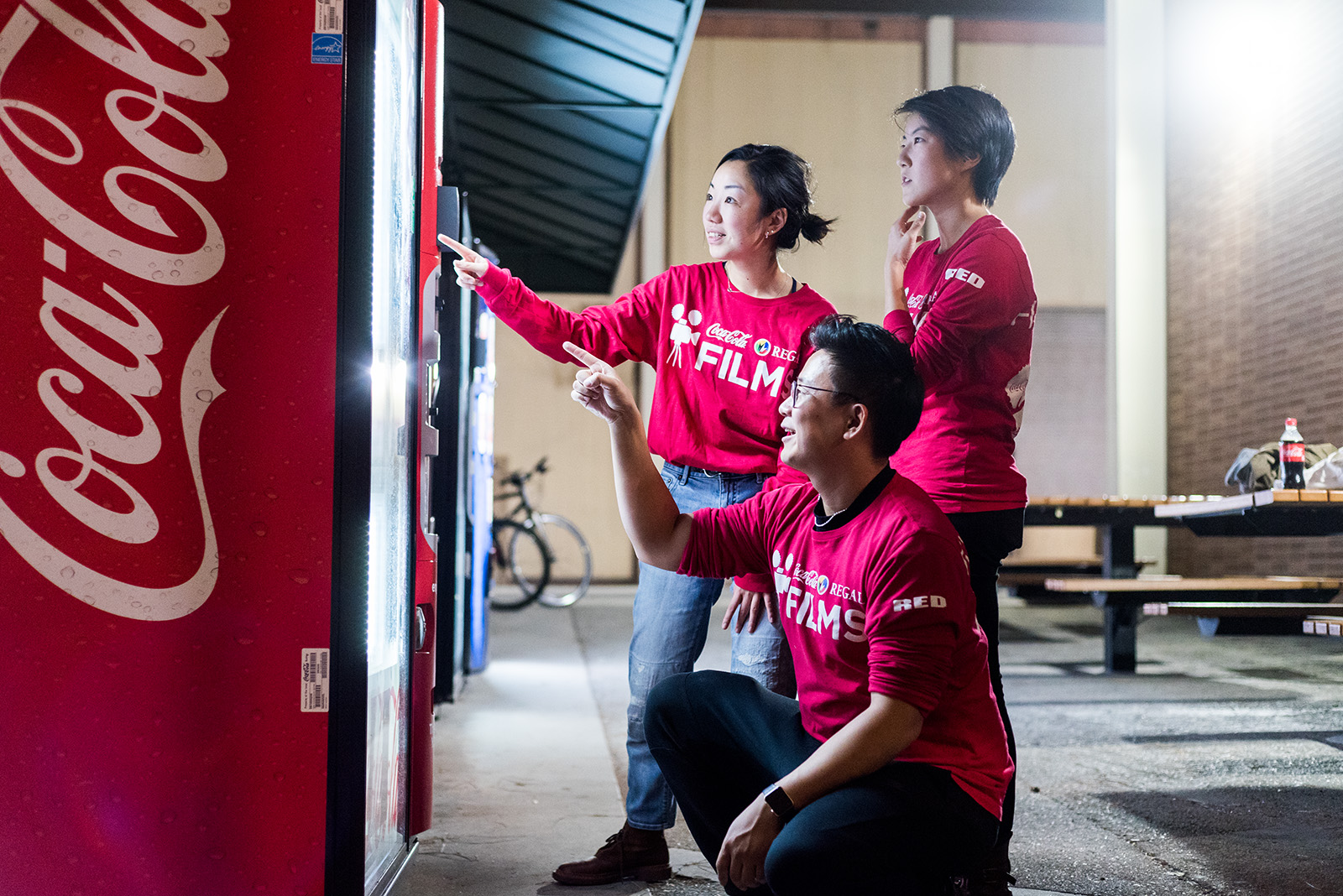 Liang Zhao, Golden Zhao and Jessie Lee (left to right) worked together on a 30-second Coca-Cola commercial as part of the Coca-Cola and Regal Films student filmmakers contest. Their commercial focuses on the magical moment in a theater when a movie starts playing, Golden Zhao said. (Isra Ameen/Daily Bruin)

Dangling a camera from a crane in the middle of a movie theater is part of a normal day for UCLA Coca-Cola advertisers Jessie Lee and Golden Zhao.

Graduate film students Lee and Zhao were one of five student duos selected as finalists for the Coca-Cola and Regal Films student filmmakers contest. Students across the country submitted ideas for 30-second Coca-Cola commercials set in Regal theaters. The five finalists, chosen by Coca-Cola and Regal in November, were provided with a $15,000 budget and filming equipment to shoot their ads. In March, a panel of professional filmmakers will select the winning team, which will receive a RED Studios digital camera package for its school and have its commercial screened in Regal cinemas across the country.

The UCLA team’s clip, “Frozen in Time,” focuses on the magical moment of anticipation theatergoers share before the movie starts, Zhao said. Producer Lee, director Zhao and their team had to make adjustments in their footage and shoot in a way that fit the contest’s requirements to capture the charm of cinema in just 30 seconds.

Zhao previously entered the 2017 contest and took second place, but Coca-Cola and Regal theaters still screened his commercial after the winners’ piece. His previous commercial – a surreal cut that featured an on-screen character reaching out of the movie screen into the real world to grab an audience member’s popcorn – has been screening in Regal theaters since December. However, Zhao said he approached this year’s project with a focus on special effects rather than humor.

In the clip, the camera follows a woman entering a theater right before a movie begins. As the character begins to eat her popcorn, the scene freezes and the camera pans across the row to show a cast of characters of various ages and backgrounds. Some are frozen in the middle of conversation, while another is stuck spilling his popcorn on another person.

The last character shown seems poised to drink his cup of Coca-Cola. Suddenly, as if a spell is broken, time unfreezes to allow the man to drink his soda. As if on cue, the characters go quiet and look up in unison as the film commences and they begin, Cokes in hand, to share the moviegoing experience.

“No matter what your background is, no matter how old you are or what gender you are, that moment when you’re sitting in the theater, when the houselights dim down and the projector lights turn on, has a magic that connects everyone together,” Zhao said.

Zhao and Lee began writing the script for “Frozen in Time” in October, meticulously mapping out the timing for each stretch of footage during the preproduction process. The opening card introducing Lee and Zhao as the filmmakers would take about three seconds, the establishing shot of the first character entering and sitting might take five, while the moving shot that shows all the frozen characters would last significantly longer than all the others, Lee said. While filming, they had to strictly adhere to their own constraints so the shots did not exceed the length requirement.

The filmmakers set up a test shoot with placeholder actors to ensure all their planned timing worked out. Line producer Liang Zhao, a graduate film student, said the test shoot allowed the filmmakers to rethink shots that wouldn’t work out in the final cut. For example, while they planned originally to have the camera pan over two rows of seats, one after the other, the test shoot results made it clear that the majority of the characters would have to sit in one row in order to save time.

“Coming from a short-film background, I’ve never been so specific with my shots,” Lee said. “We had to go into the shoot knowing all of the shots beforehand and knowing how long or how fast they have to happen, which was something that we discovered more and more in preproduction.”

Since actors had to actually freeze in place for most of the running time, Lee and Liang Zhao looked for performers who had good body control, such as those with dancing experience. They also looked for actors with differing ages and ethnic backgrounds in an attempt to portray the universality of the experience people share in the theater.

An additional challenge the team faced was to ensure the advertisement didn’t overstimulate viewers by trying to pack too many visuals into such a short time frame. At one point, they placed a light inside the frozen man’s Coca-Cola cup with the intention of making it glow with a magical quality. However, Liang Zhao said the team members cut the detail from the final footage because they felt too much was going on for viewers to process within the time span.

Liang Zhao said that working on a film project for an advertiser presents challenges that most film students don’t see regularly. In addition to the unusually short time frame, the team had to ensure that the perfect framing of the Coca-Cola logo on the cup and the use of actors met the company’s requirements.

“For me, it was a very different way to work in a student project,” Liang Zhao said. “I think it’s a great opportunity for students like us to see how, in the real world, shooting something for a client actually works.”