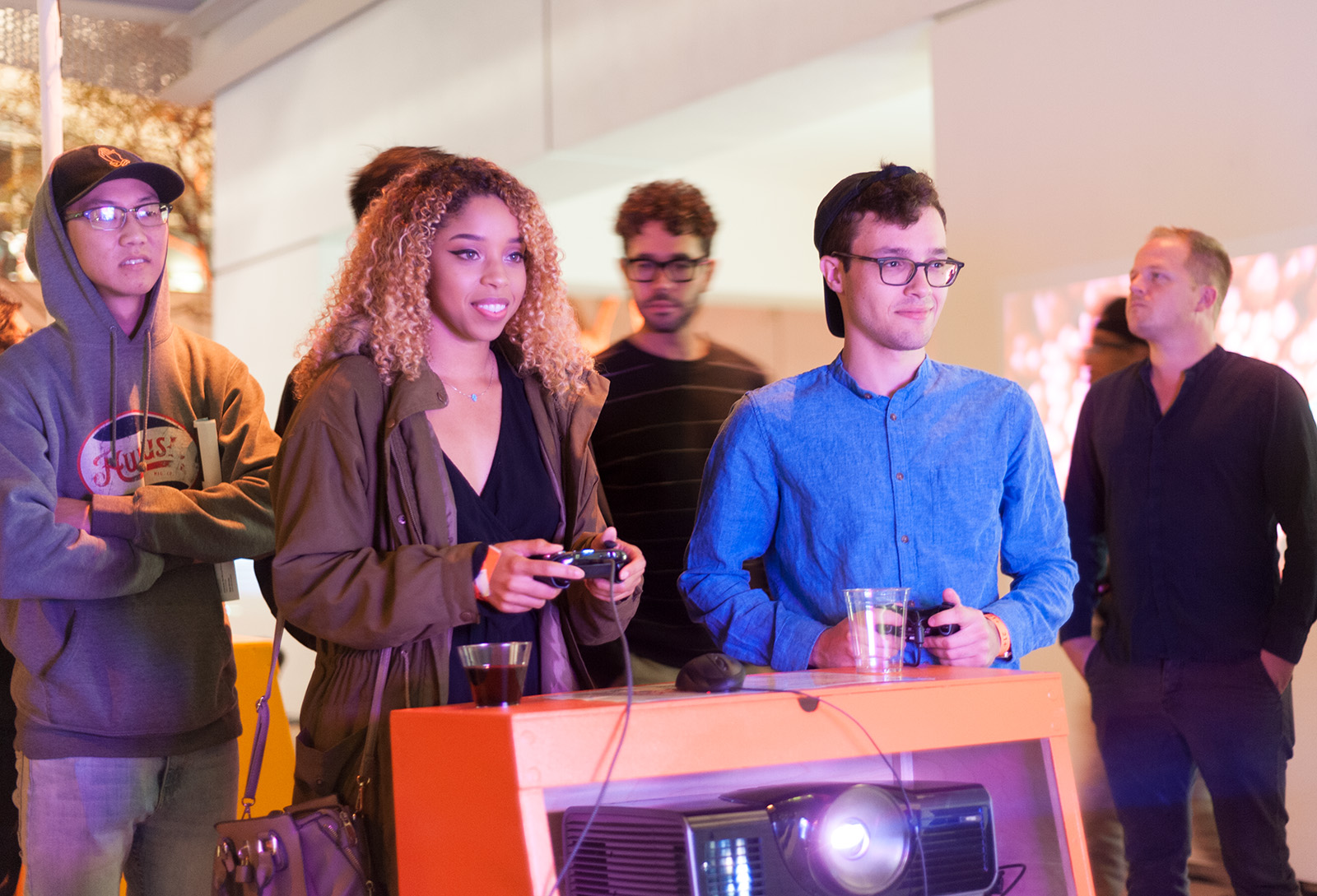 Attendees of the fifth UCLA Game Art Festival played video games, board games and other interactive installations. The festival featured more than 50 exhibits created by select artists from UCLA and around the world. (Nick Kardan/Daily Bruin)

The operatic Latin lyrics from the “Super Smash Bros.” sound track concluded festivities at the Hammer Museum on Tuesday night.

The museum hosted the fifth UCLA Game Art Festival in its first- and second-floor courtyards where the sounds of attendees playing games rang out for three hours. Design media arts professor Eddo Stern organized the festival through the UCLA Game Lab with help of fellow supervisors David O’Grady, a design media arts lecturer, Tyler Stefanich, a UCLA alumnus and Isla Hansen, an assistant professor in design media arts. The team invited select artists and game makers from UCLA and around the world to showcase their work in more than 50 exhibits ranging from board games to virtual reality.

While people usually play games within the confines of their homes, Stern said the festival allowed gamers to play alongside other people in a public space. The event also highlights works that bridge the gap between gaming and other artistic disciplines, including film, sculpture, performance, photography and theater.

Fourth-year design media arts student Lilyan Kris and alumna Sara Haas presented their interactive video installation, “Phantasm Atlas,” at the festival. Though the piece runs on the popular game engine Unity, Kris said she and Haas consider it more of an interactive experience than a game. The video takes users on a virtual tour of the inside of their body, which is represented by a shifting collage of abstract designs and images on screen.

To play the game, users don a silicone sleeve covered in round, pod-like protrusions which manipulate aspects of the on-screen display, such as floating hearts, star symbols, a tooth and a watering can. Attendees wrapped the silicone sleeve around their forearms and controlled some of the screen’s visuals by tapping pods, which lit up with light blue and pink lights.

Kris said pop culture renditions of the human body perpetuate standards for our anatomy. The abstract, user-customized “Phantasm Atlas” rejects uniformity, and is inspired by the strangeness of the human body and the idea that something so complex can never be objectively rendered, she said.

“We wanted the experience to encourage people to reimagine their bodies and have a little bit of agency over the narrative of bodies outside of the dominant pop cultural perspective,” Kris said.

While Kris and Haas heavily utilized video art in their piece, Nick Crockett, a design media arts alumnus and veteran of the Game Art Festival, integrated real-world space into his latest game. In “Horse Game: A Friend You Can Ride On,” players must ferry whimsical corpse-like characters through a part-modern, part-medieval setting in a horse-man’s taxi. The game runs on a mini arcade machine that is worn as a backpack.

At the festival, Crockett donned a plush pink horse-shaped hat and played the taxi driver in real time, toting the portable game on his back and tracing the in-game path with his movement. Festivalgoers playing the game had to follow close behind Crockett and verbally direct him in order to change their in-game position.

Crockett said inserting himself into the game was a conscious reference to the labor that goes into technology and game making. The work that developers put into building a computer or a video game isn’t immediately clear from the final, polished product, but interacting with the actual author of the game while playing it helps connect players with the developer himself, he said.

“Phantasm Atlas” and “Horse Game” were both part of the museum’s first-floor arcade section, but the festival featured other gaming areas as well. The “Systems of Struggle: History on a Tabletop” board game exhibition hosted games that highlighted historical times of suffering such as World War II and the Salem witch trials. The festival displayed the board games across several tables in the second-floor courtyard, with wooden game pieces, cards and instruction booklets.

Stephan Xie, a first-year design media arts student and festivalgoer, said he was intrigued by “Regurgitating,” a program that visually renders randomized computer-generated flowers. A projector displayed a flower waving in the wind onto a small stone slab, which changed when festivalgoers pressed a large button. After the button was pressed, the projection then followed a new seed that traveled up the stem of the flower, launched in the air and landed in a new, randomized field, starting the scene again with a different looking flower.

“Every single game is so unique,” Xie said. “(The festival) makes you think about games in a different way.”

Stern said he also appreciates the festival for its portrayal of gaming as an art form. The festival defies mainstream stereotypes that lead people to look down on gaming, such as the idea that all games are for children or that they’re mindlessly violent, he said.

“All these stereotypes about games are eroding,” Stern said. “And the festival really is a platform to show that erosion, and bring new voices into this medium.”