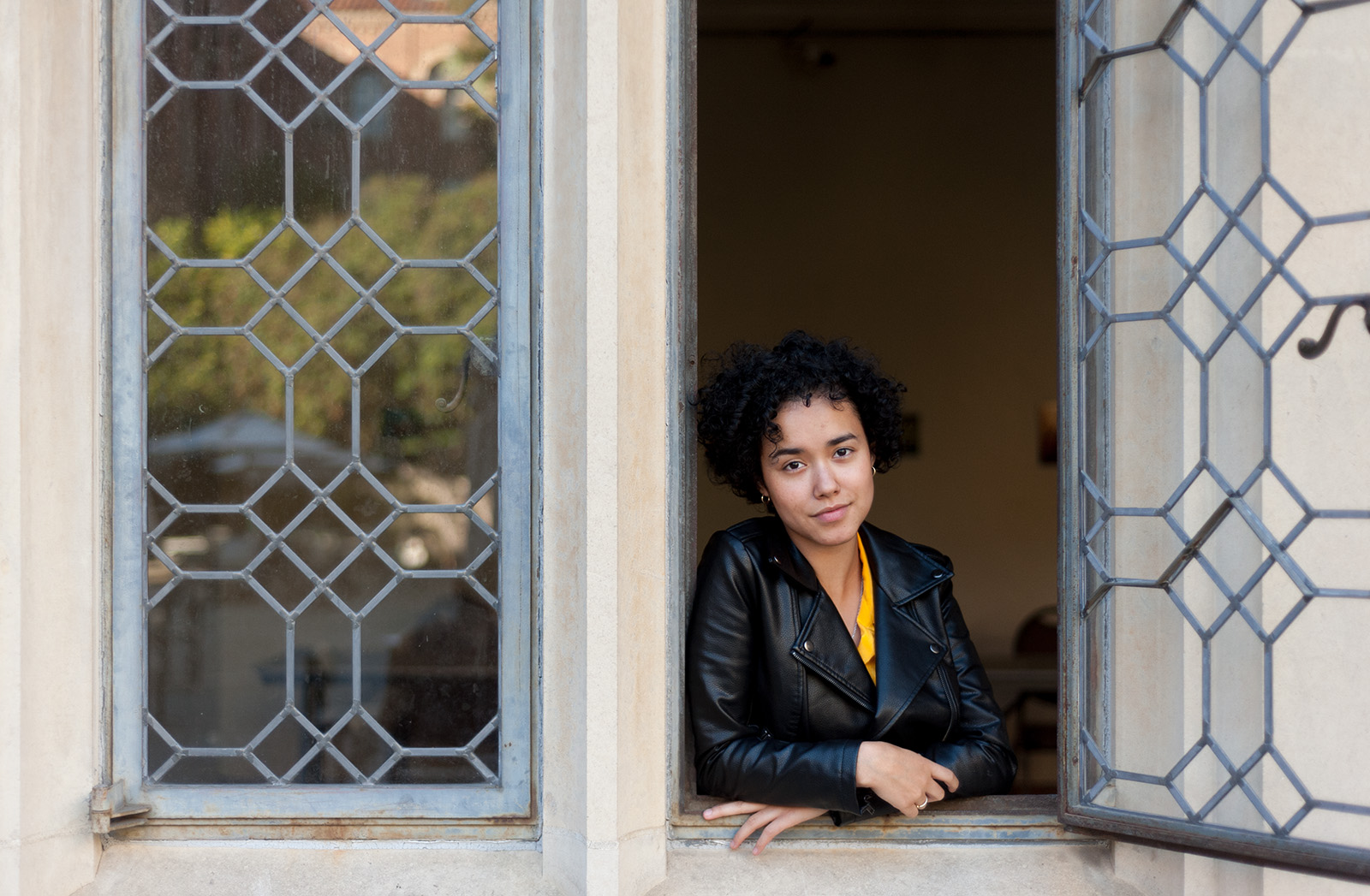 Tamia Romo, a second-year political science student, said her poetry is inspired by her mother and universal topics such as racism and sexism. (Amy Dixon/Assistant Photo editor)

When she was still in elementary school, Tamia Romo wrote her first poem: an ode to her mother.

“My mom actually writes poetry, so I was introduced through her, and it’s always been something I’ve done to analyze the world around me,” said the second-year political science student.

Her mother still has the poem, but Romo said she is embarrassed by it and begs her mother to never let it resurface.

Romo began performing spoken word competitively in high school when the poetry organization Youth Speaks hosted a schoolwide poetry slam her sophomore year. She decided to take the stage as a poet for the first time and has continued performing poetry ever since.

Romo now serves on the general staff for The Word on Wednesday, a weekly open mic in the Kerckhoff Art Gallery, for which she said she tries to create a welcoming space for poets to share their thoughts and find a sense of healing and community.

“We have this whole thing where, there’s no such thing as a safe space, but you can make spaces safer,” Romo said.

She will be helping facilitate a writing workshop at the open mic Wednesday, which is open to anyone within the UCLA community.

Terisa Siagatonu, Romo’s mentor who helped form the College Unions Poetry Slam Invitational team at UCLA, said the first time she saw Romo perform, she recognized somebody who was writing and performing far beyond her years.

“Offstage she is the sweetest, … kindest person you’ll meet,” Siagatonu said. “And when she touches the stage, she’s this fiery, passionate young woman who will burn the stage down with her words – it’s almost like two personalities in this one beautiful person.”

When Romo left for college, Siagatonu told Romo to join The Word on Wednesday to find her own poetry community at UCLA.

Romo went to her first The Word on Wednesday in her first year and has since taken on more of a leadership role, making sure the weekly event runs smoothly and helping put together a zine for the group.

Romo still performs a few times a quarter, and her poetry heavily draws influence from her mother and topics such as racism and sexism. She said that as a perfectionist, she’s never fully content with what she writes.

“(There are) poems I’m proud of, but there’s not necessarily a favorite, because they were the necessary ones to write,” she said.

While Romo embraces the freedom and vulnerability that comes with open mics, she said the most challenging part of monitoring open mics is navigating how to properly react when a poet says something offensive or hurtful, such as poetry containing racist, sexist or homophobic themes.

Romo said she is a strong proponent of having open spaces like The Word on Wednesdays because people in the UCLA community feel validated when talking about problems they otherwise might not be able to speak about.

While she said offensive themes are not as big of an issue at UCLA, she learned how to navigate problematic situations during her time with Youth Speaks. From her high school experiences, she said she understood the importance of making sure both the poet and audience felt accepted and heard.

She added while open mics encourage freedom of speech, poets are not exempt from freedom of accountability. Audience members are encouraged to start a dialogue with the poet after the event, and sometimes Romo will address concerns with a poet herself.

“We don’t want to make that person feel isolated because that’s also not what we’re here for,” she said. “I’m here to make spaces conducive to growing and catharsis.”

Bianca Brown, a third-year philosophy student and co-director of The Word on Wednesdays, said that Romo effectively evokes a feeling of community.

“She’s a big part of bringing love to everybody … making sure everyone’s voices are heard and nobody’s not being paid attention to,” Brown said.

As a part of the learning and growing she has done through facilitating The Word on Wednesdays, Romo said the most valuable lesson she has learned is the importance of community, which she found within the group.

“(College is an) incredible space for learning and growing, … but often times it takes an emotional toll on students, and I believe we need to address that,” she said. “So I’ve learned that I need (a sense of community) in my life, and I think that everybody does.”