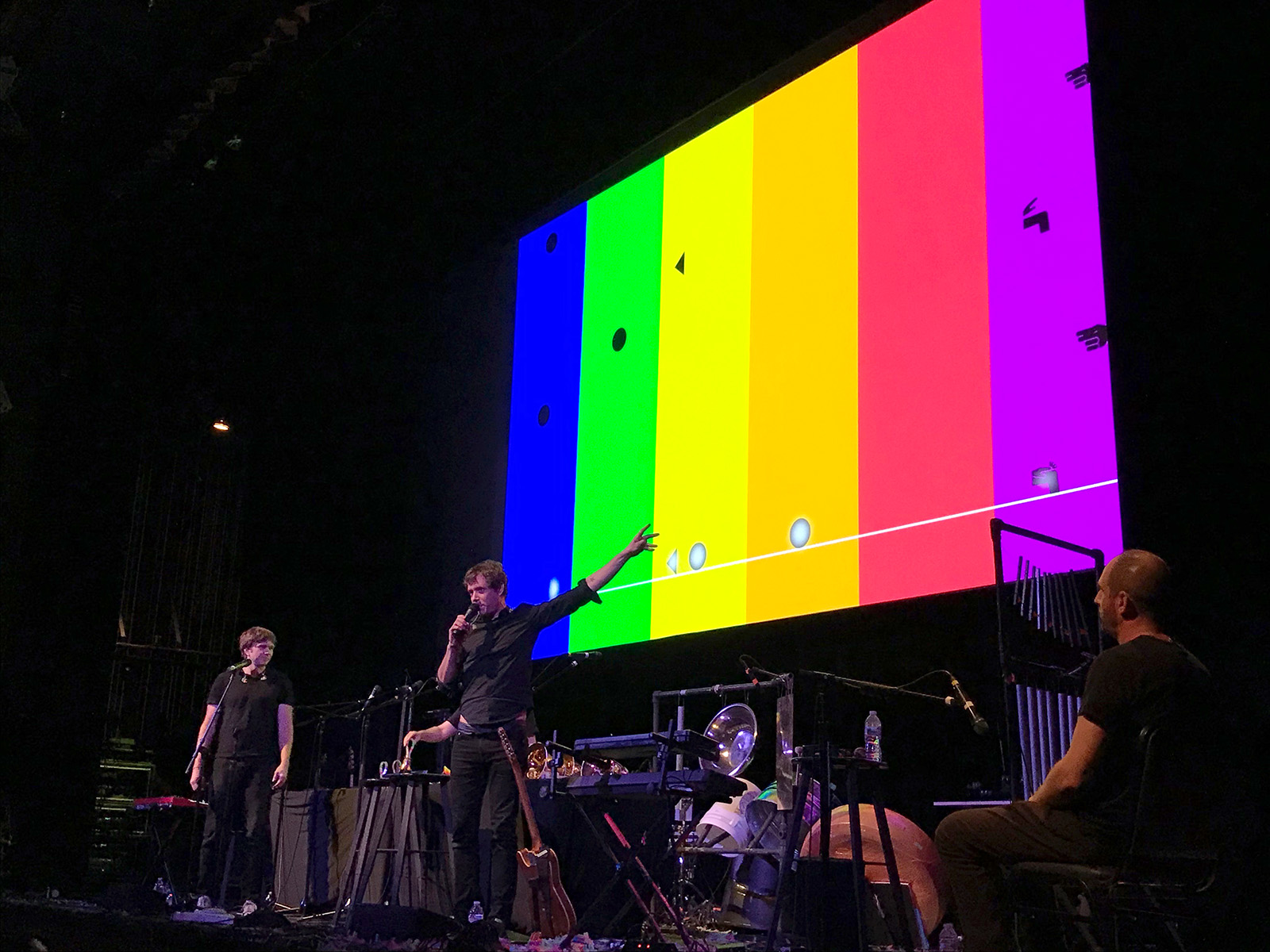 OK Go’s concert at Royce Hall on Saturday night featured a Guitar Hero-like app that audience members downloaded and then played along with a rainbow screen onstage. The group performed old favorites such as its song “Here It Goes Again.” (Raunak Devjani/Daily Bruin senior staff)

OK Go is best known for dancing on treadmills and in zero gravity in its music videos.

The music videos were the focus of its latest live performance at Royce Hall on Saturday. While playing live music in front of its music videos from the past 20 years, the band included audience Q&A’s and some new renditions of its original numbers, creating an engaging concert experience that brought its campy and colorful music videos to life.

The audience was welcomed into Royce Hall with a barcode projected onto a giant screen, and a message from the band prompted the audience to download an app coded by lead guitarist Andy Ross. The on-screen message stated the app was a surprise and that audience members should wait to open it until asked.

The stage went dark, and the screen lit up for the opening song, but OK Go didn’t perform it. Instead, its members screened an old video of themselves dancing to “C-C-C-Cinnamon Lips” on a TV show almost two decades ago. After a hearty laugh at their boy band-like dance moves, the stage lights faded and band members took the stage.

This time the band launched into live renditions of its songs, starting with “Get Over It,” an upbeat number accompanied by bursts of confetti during its powerful chorus, visuals of Cadillacs and mounted deer heads. The highlights of OK Go’s discography gave the audience a taste of the band’s fearlessness in terms of visual and musical experimentation.

The band performed its next song, “A Million Ways,” alongside an old music video, ditching instruments to recreate the ridiculous dance live onstage. The band has come a long way, but it wasn’t afraid to embrace its initial mistakes. The band’s self-reflective attitude acknowledge its creative growth, while also showing an appreciation for its humble beginnings.

“We made a pretty long career out of bad dancing,” said frontman Damian Kulash.

But despite its childish antics, the band’s music remained mature. While the boys jumped around wearing nerdy suits in the video, onstage they sang, “Oh, such grace/ Oh, such beauty/ And lipstick and callous and fishnets and malice/ Oh, darling/ You’re a million ways to be cruel.”

Even between elaborate visuals and vivacious performance, OK Go did not forget to make the audience feel included. Each song on the setlist was separated by either a Q&A with the audience or with Kulash, revealing funny stories behind the band’s creative processes.

Kulash’s humor and openness with the audience made it clear that OK Go prioritized authenticity over showmanship. Instead of intensive head banging and elaborate visual effects, the band simply sat on stools, telling jokes and sipping on water in between songs, which helped build a stronger connection with those in the crowd.

Following the first few opening numbers, OK Go performed “Here It Goes Again” against a backdrop that played its most well-known video of all time. As the virtual band members performed stunts and danced on treadmills on the screen, the band played the song that earned it its fame on the stage. Though the members’ whacky, brightly colored clothing may be out of style, their music is still timeless.

Following a brief intermission came a softer, more acoustic section. Numbers like “Shooting The Moon,” which originally featured guitar work and heavy distortion, were modified with a delicate touch – the band played the song solely with hand bells and xylophones, weaving in angelic group vocals and making it feel like Christmas had come early.

Shortly after the intermission occurred, the immersive peak of the show during which the band prompted the audience members to open the app they had previously downloaded. Each audience member’s screen showcased a different colored background with three different buttons on it. After explaining how the app works, the band recreated a mass, real-life Guitar Hero style game in which the audience members had to hit notes according to the prompts on the screen. In an interactive, game-like fashion, OK Go involved its audience far more than most rock bands would dare to during a concert.

The latter half of the show was also more focused on Kulash’s brilliant vocal range. In the sentimental song “Last Leaf,” he went solo and sang lower notes to bittersweet lyrics such as “And if you should be the last seed in spring/ To venture out a leaf/ I’ll still be here waiting on the rain/ To warm your heart for me.”

But when he sang “Skyscrapers,” Kulash shifted the energy of the stadium completely with high notes and a loud, satisfying, rock ‘n’ roll scream of the lyric, “I was blind.”

The band members’ energy rose to a new height with the much awaited “Upside Down & Inside Out,” a song with a music video that was shot on a plane in zero gravity. The original video played on the screen and featured the band members flying around weightlessly along with colorful balls, suitcases and exploding, paint-filled balloons floating around them.

OK Go’s recounting of its creative history felt like an immersive music documentary. With youthful energy and splashes of color, OK Go’s visual spectacle, engaging antics and classic music provided a testament to the band’s endearing weirdness and unstoppable innovation.