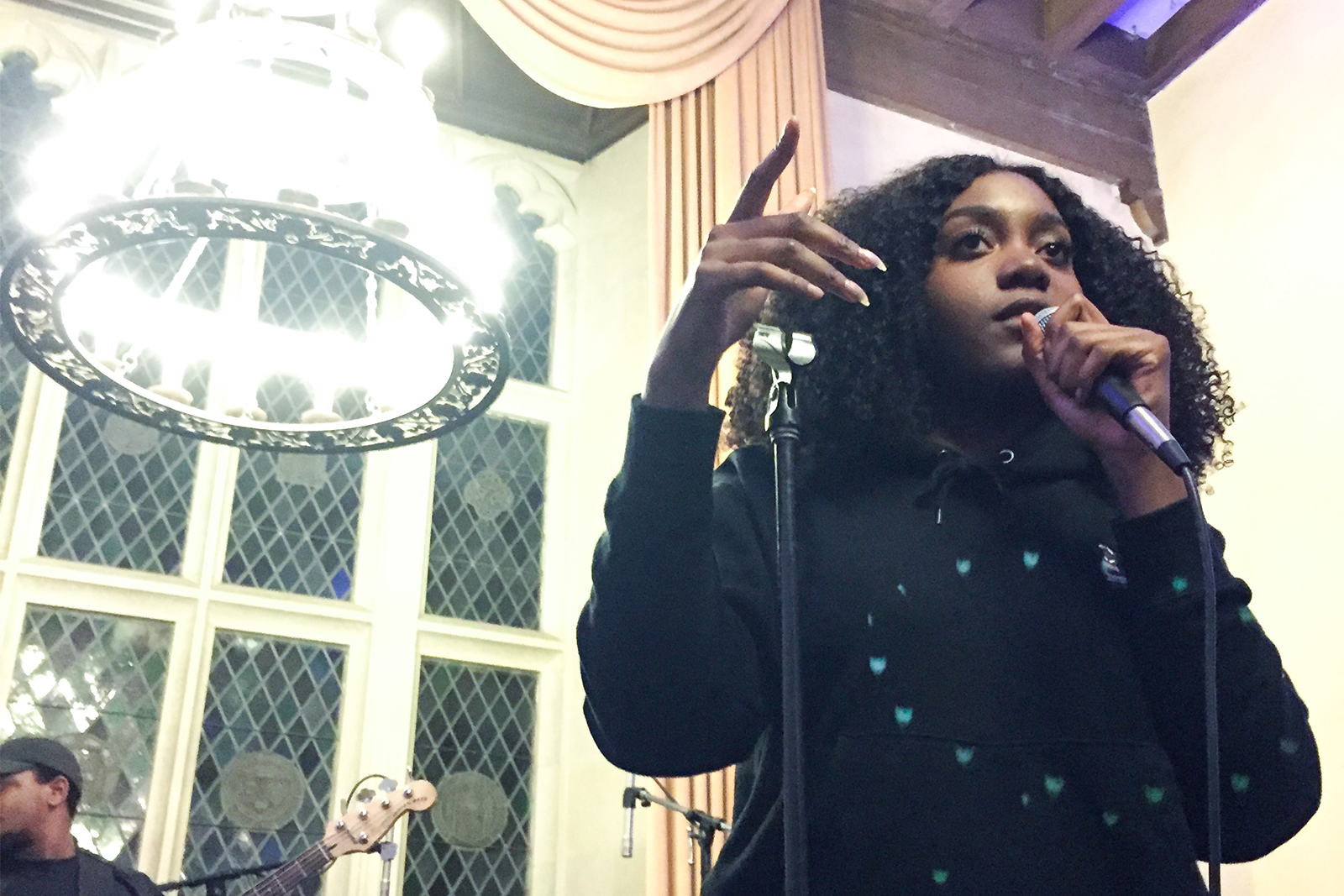 Rapper Noname performed at Kerckhoff Grand Salon on Thursday night. The performance was a good way to relieve stress after midterms, but the acoustics in the venue were not very good, misrepresenting Noname’s impressive skills. (Alexandra Del Rosario/Daily Bruin)

Noname is a name everyone should know.

The Campus Events Commission invited the “Sunny Duet” rapper and her band to perform in Kerckhoff Grand Salon on Thursday night. The rapper and her band grooved on a small black platform in front of around 100 students. Despite their limited stage space, Fatimah Warner, who goes by the stage name Noname, and her guitarist, bassist, drummer and keyboard player filled the venue with soothing tones and conversational rapping.

Noname, sporting a black hoodie and skirt with pink shoes, began the show by working her way through the crowd of cheering students to the small platform. Once there, she launched into “On the Low,” an unreleased song which set a casual mood for the rest of the hour. The rapper, with a small white cup in her left hand, stood in place as students bobbed their heads to her quick rhymes.

In the song, Noname rapped over funky instrumentals – similar to other rap numbers like “Yesterday” and “Diddy Bop.” Even though they did not know the song, audience members still cheered and swayed to the music.

The small and intimate setting allowed for plenty of student interaction. The rapper acknowledged a student in the front corner who said she had been a fan prior to the release of Noname’s first album. Noname also called another student up on stage, to repeat the words “Dance with me” into her microphone. And for most of her set, Noname bounced her right hand over her crowd asking them to sing lyrics with her during songs like “You You You.”

In addition to her own material, Noname performed her verse from the song, “Church/Liquor Store” by fellow Chicago rapper Saba. She quickstepped across the small stage as she sang the politically charged lyrics, “They sold, they sold/ They sold prison the way they pipeline/ Systematically lifeline.”

While Noname’s lyrics energized the college crowd, most of the rapper’s rhymes were drowned out by the strong, reverberating bass notes and drum beats coming from the band behind her.

The students grooved to the blaring instrumentals, but part of experiencing a rap show is rapping lyrics at the same time as the artist, which was difficult as the lyrics were nearly inaudible.

Additionally, technical malfunctions resulted in loud outbursts of feedback from the sound system in between songs. The mishaps disturbed the relaxed ambiance, but most audience members ignored the interruptions and continued to revel in the body roll-inducing melodies.

Noname and her band brought the show to a satisfying end with the empowering number “Shadow Man.” She quickly rapped over a strong, consistent snare drum, bubbly keyboard notes and airy backing vocals.

Students repeated the lyrics “Bless the nightingale/ Darkness keep you well,” along with Noname until the instrumentals gradually subsided. She stepped off the small platform and took pictures with fans until she became undetectable in the swarming student crowd.

Upon seeing the band pack up, students chanted “encore,” hoping the rapper would come back to finish the set with another number filled with clever rhymes. However, after “Shadow Man,” the night with Noname had come to a complete close.

Though the groovy Thursday night show proved a great way for students to unwind from midterm stress, the musicians’ lack of space and high-quality acoustics resulted in a misrepresentation of Noname’s skills. The rapper’s talent far exceeds the size of the stage on which she performed.