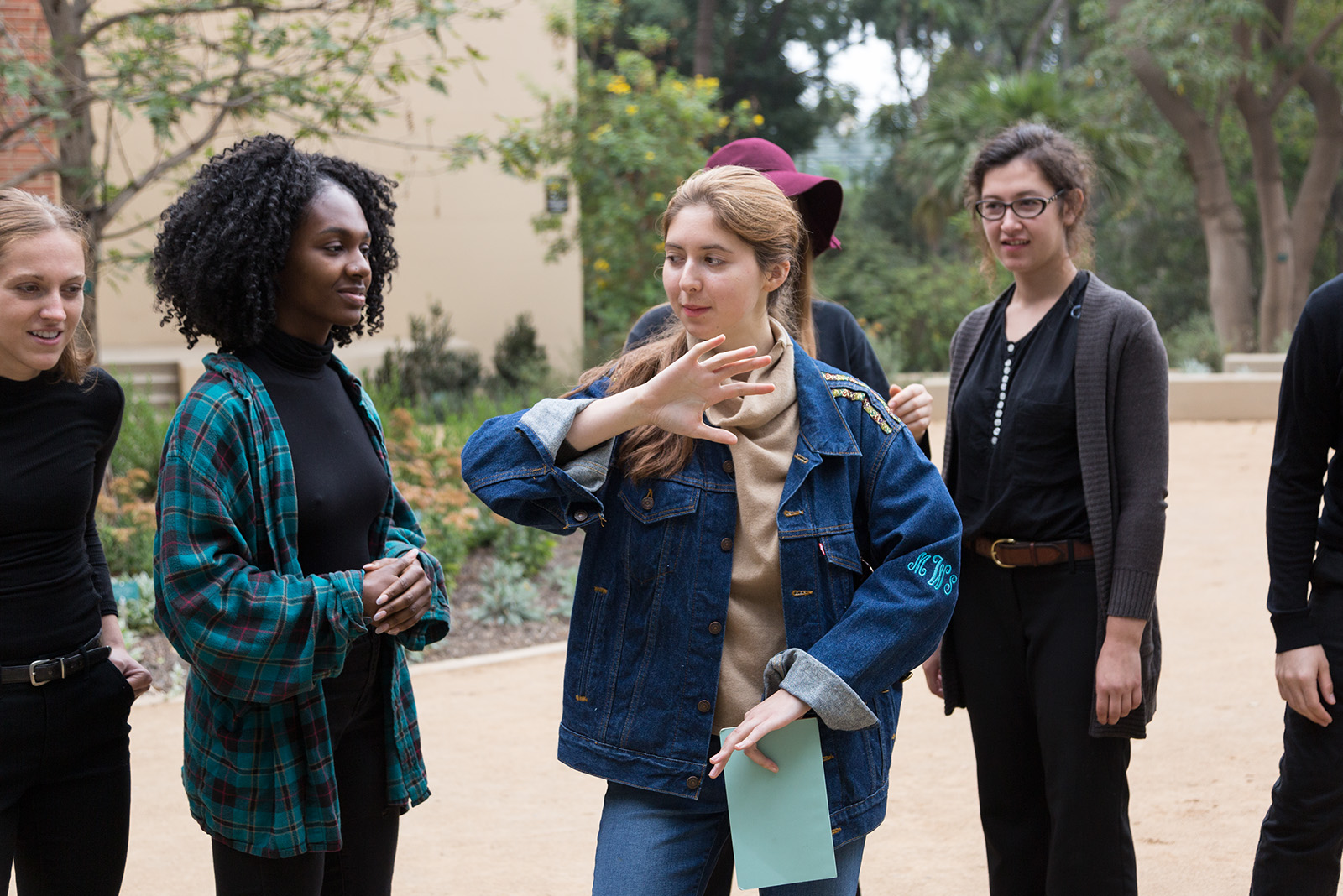 Fourth-year theater student Davia Schendel wrote “Beatniks,” one of the two plays that will be staged Friday through Sunday as a part of Dually Noted Theatre Company’s fall production. “Beatniks”commemorates the female poets of the Beat Generation, a counterculture literary movement of writers and poets that emerged post-World War II. (Amy Dixon/Assistant Photo editor)

The Mildred E. Mathias Botanical Garden will serve as a backdrop for more than just plants and flowers this weekend.

On Friday, Saturday and Sunday, it will become the set for the Dually Noted Theatre Company’s fall production.

Dually Noted’s production, which is free and open to the public, features two one-act musicals, written and performed by UCLA students. “Little Stars,” written by second-year film and television student Annika Patton, a Daily Bruin staffer, tells the story of Romeo and Juliet after the end of the original Shakespearean play, as if the two meet again in the afterlife. Fourth-year theater student Davia Schendel’s “Beatniks” commemorates the female poets of the Beat Generation.

The productions strive to tell new and innovative stories while using the distinct setting of the botanical gardens to enhance the shows and their narratives, said Dually Noted’s creative director and UCLA alumna Mina Bloom.

The two upcoming productions, like most of Dually Noted’s shows, originated from students. The production team worked directly with the show writers, which helped shape the shows to the needs and capabilities of the company, said second-year theater student and production manager Kayla Stults.

“It’s a full development process, so during rehearsals, during production meetings, things are constantly evolving and changing,” Stults said. “We’re able to mold it to what we need to work for us, we’re not working with someone else’s idea.”

Patton had previously written and produced “Little Stars” when she was in high school. For Dually Noted’s production of the show, Patton worked with the show’s director to revise the show by finessing parts of the story.

Unlike Patton, Schendel had never written a musical before, she said. When searching for a story she wanted to tell, she fell back on her interest in the female poets of the Beat Generation, a counterculture literary movement of writers and poets that emerged post-World War II.

As a high school student, Schendel loved Allen Ginsberg and other male poets of the time. But in college, she said she realized she knew nothing about the female poets of the same generation. Schendel said she had always wanted to do a creative project about the female Beat Generation, and decided to turn her research into a musical. Schendel then spent last summer writing the script, creating lyrics and crafting melodies.

Transforming the botanical gardens into a performance space for the two shows was a challenge for the production crew. Because of potential technical difficulties, Stults said the production team had to consider finding electrical outlets for band instruments, the acoustics of the performers and potential rain.

“Little Stars” will be performed in The Nest, an informal amphitheater-like space, while “Beatniks” will be set in the newly built La Kretz Garden Pavilion.

The production team tackled the set issues in weekly production meetings, where members discussed behind-the-scenes details such as reserving spaces for rehearsals and budgeting to make sure the production ran effectively, Stults said.

However, the gardens also added to the unconventional atmospheres of the shows. Bloom said using an outdoor venue brings audiences into an atypical theater environment, and contributes to each show’s central message.

“Little Stars” takes place in a transitional space between heaven and earth, and so the natural, nontheatrical scenery contributed to the otherworldly ambience, Bloom added. For “Beatniks,” the location evoked some of the scenery central to the story.

“I was thinking, this is kind of harkening back to (New York’s) Washington Square Park and Greenwich Village and that was a huge meeting place for this beatnik generation,” Schendel said. “This is actually kind of appropriate that we’re doing it outside.”

Each of the two shows will be performed three times through the course of the weekend, and Schendel said she hopes the shows will inspire audiences beyond the scope of her own musical.

“I hope that they walk away knowing about these women and realizing that so many stories are untold in history,” Schendel said. “You should always look behind the curtain and see who else was part of the movements or events that you are fascinated with.”