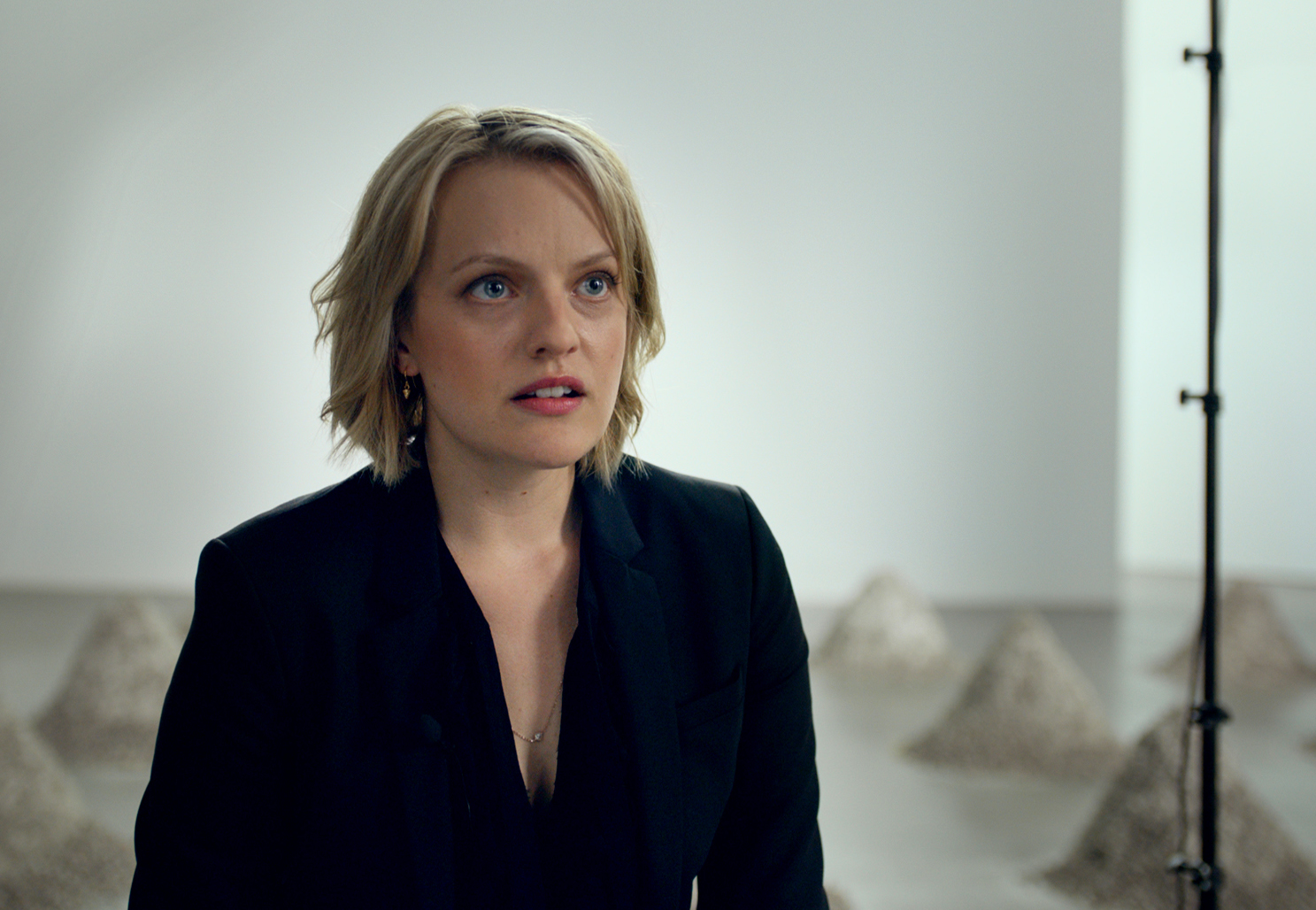 Actress Elisabeth Moss plays an American journalist named Anne who sleeps with the main character Christian (Claes Bang). During the movie, she confronts Christian about their romantic connection in a museum, which is overheard by the docent. (Courtesy of Magnolia Pictures)

“The Square” is completely out of the box.

The 2017 satire drama film by writer-director Ruben Östlund is a captivating spectacle of understated humor, with cleverly written moments of discomfort and thought-provoking actions. However, “The Square” takes on too many complex ideas while critically looking at the hypocrisy of human nature, leaving an otherwise crisp film muddled down with semi-unfinished commentary.

Sleek modern art curator Christian (Claes Bang) is the protagonist in Östlund’s latest film. Christian is in charge of the latest installation at the Sweden Royal Palace-turned-modern art museum in Stockholm. The installation consists of a work called “The Square,” an empty 4-by-4-meter box with nothing inside – the perimeter represents a supposed zone of empathy and altruism. As the movie progresses, both the marketing team for the installation and Christian himself face scandals with remorseful consequences.

Christian himself is a complex character with seemingly desirable qualities at first; he is rich, politically correct to the public eye and drives an electric Tesla. However, as the film continues, he gradually shows his true colors: After his phone is stolen early on in the film, he shows his prejudice toward the lower class by leaving threatening messages in the mailboxes of his suspects, rather than confronting them in person because he is afraid of being seen with them.

Christian’s actions become increasingly selfish and egotistical, creating a complex and hypocritical protagonist the audience can simultaneously root against and shamefully relate to. Bang’s acting is perfectly in tune with Christian’s psyche as he walks the line between feeling invincible and having mental breakdowns. The strength of Bang’s acting comes from his ability to convey different levels of openness and virtuousness through facial expressions and small body movements.

“The Square” portrays human virtues and weaknesses through modern issues. Homelessness, in contrast to the lavish lifestyle of other characters, is a constant force in the movie. The film showcases the separation between the rich and poor by showing the lack of acknowledgment by the privileged toward those asking for money. In one scene, a person handing out flyers on the street asks, “Do you want to save a human life today?” only to be met with shaken heads by more fortunate passersby.

“The Square” gathers its poignancy through purposefully uncomfortable moments that satirize and find holes in human nature. At one point, an onstage talk at the museum with an artist and a moderator is continually interrupted by a man with Tourette syndrome yelling obscenities. The scene is disturbing at first, but later forces the audience to feel guilty for being annoyed when a character on screen criticizes the lack of empathy for the man.

In spite of its impactful portrayal of themes like power and values, the film starts to falter in its coverage of a large variety of social critiques, some of which are never fully drawn out.

The film attempts to speak critically against the trend of sensationalism in the media through the role of the museum’s public relations and marketing team, which releases an insensitive but attention-grabbing video of a homeless child being blown up in “The Square” as an attempt to signify the antithesis of the art’s message. The video gets published without Christian fully looking into the concept because he is too busy dealing with his stolen phone, an egotistic pursuit. His preoccupation with self-centered matters allows the insensitive idea to continue unchecked – an attempt to show how insidious tactics by the media are often overshadowed by personal and shallow needs.

The museum then gets caught in a controversy, ultimately costing Christian his job. Christian’s karmic retribution could be analyzed further, but is left to the viewer to piece it together because of the multiple climaxes at the end of the movie. An opportunity to have a more in-depth analysis is lost among the competing themes of the film.

Östlund has shown that he has an eye for the inconsistencies in today’s seemingly holistic society through a smartly written and powerful film. However, “The Square” leaves the viewer with an overwhelming amount of topics to think about.