Theater Review: ‘Underneath the Lintel: An Impressive Presentation of Lovely Evidences’ 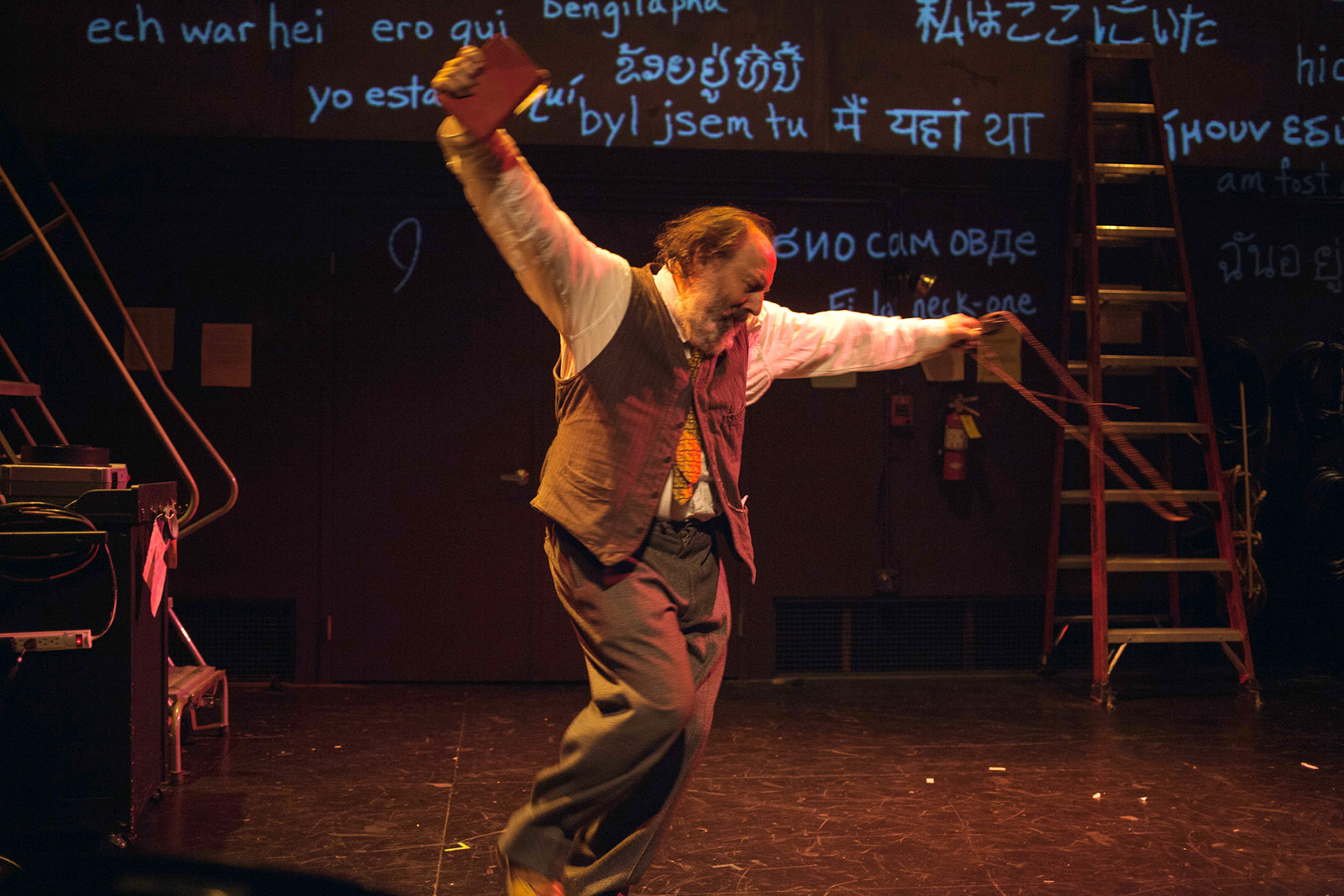 "Underneath The Lintel: An Impressive Presentation of Lovely Evidences"

Warning: This post contains plot spoilers of “Underneath the Lintel: An Impressive Presentation of Lovely Evidences.”

Any librarian pales in comparison to one that travels from London to China to Australia in search of the borrower of an overdue book.

At first glance, “Underneath the Lintel: An Impressive Presentation of Lovely Evidences,” which opened at Geffen Playhouse on Oct. 10 and will run through Nov. 19, poses a lighthearted adventure story about an overly strict librarian (Arye Gross) who recounts to the audience his international expedition in search of the culprit borrower of a 113-year-overdue book. However, along the journey, the one-man show written by Glen Berger takes on a more serious note, as Gross’ character finds his purpose beyond book-lined walls and in the simpler joys of life. The librarian’s hunt for the borrower may not be successful, but the discovery of himself stands true.

“Underneath the Lintel” opens with the librarian in a fury of excitement as he stands at center stage stating he has a story to retell. Humorous with his dry personality, the character comically breaks the fourth wall and moans to the crowd about overdue books, maintaining a melancholy mood and perking up only when mentioning the heavy stack of fines awaiting the perpetrators.

With only a few minutes of similar joking chatter, the show quickly reaches the root of the story when the librarian shares that he discovered, much to his horror, a 113-year-overdue book in the nighttime drop-off slot. Rushing toward the front of the stage, he approaches the audience, hoisting the tattered book in the faces of the attendees in the front row.

Gross does a fantastic job of grabbing the audience’s attention and pulling it into the story. While going off on tangents about the curiousness of the book, he pauses to ask it rhetorical questions while maintaining strong eye contact. The audience interaction in the already intimate theater space creates the feeling of being more invested in the journey as well.

Inside the book, the librarian finds the first of a series of open-ended clues – writings in the margins of the book in multiple languages and a decades-old receipt for a pair of trousers that were never claimed in London. Sharing the clues, he begins telling stories about his trek around the globe without leaving the confines of his library office set to do so.

The minuscule clue details are difficult to grasp as the surrounding set does not amplify the production. With only a chalkboard, a desk and a projector to share pictures of his travels on stage, the sparse set forces the audience to rely on his spoken words, which could be a challenge for attendees without trained ears.

Gross’ character helps the audience slightly by using the chalkboard to write important dates and clues for the audience to keep track of. With each new discovery, the librarian grows increasingly excited, stomping his feet on the stage and hurriedly writing down notes. Gross’ intensity is both humorous and engaging, compelling one to follow his trivial clues and remain entertained by them.

The play reaches its climax when another clue leads the librarian to the popular folktale of the wandering Jew. The legend states that as Jesus Christ carried a cross on his shoulder and marched toward his death, he paused at a Jewish man’s home to ask for help. Underneath the lintel, the man shooed him away – a simple decision that sentenced him to an eternity of life on earth, simply wandering.

For almost 2,000 years, the Jewish man was forced to live a life without a purpose or a companion, leaving clues around the world in the hope someone would discover that his existence was not a myth.

Now with shabby hair and a face coated in thick sweat to signify months of traveling, Gross excellently portrays the look of a man in a life crisis. The stage lights dim and a spotlight shines down on the librarian as he stares up at the ceiling, as if in thought to himself, delving into a heavy-hearted monologue about his legacy. Fearing the same purposeless wandering of the Jewish man, he considers the memory he would leave behind and if, with no family, anyone would remember him in the decades to follow.

The monologue stands as a telling moment for audience members, as they begin to infer that the librarian’s journey is equally about finding the borrower as it is about unearthing his own identity.

The librarian’s moments of personal discovery during the manhunt allow him to be viewed as a character with feelings and passions, instead of only a storyteller. His discovery of his love-hate relationship with the play “Les Misérables” and his night spent reminiscently swing dancing in New York while taking a break from tracking down clues make his character more endearing. The dreary librarian at the beginning of the play is difficult to connect with, but his quirks, revealed throughout the story, make him more personable.

In the final moments of the play, the librarian finds he still has no concrete evidence that the owner of the overdue book and the wandering Jew are the same person. The inconclusive ending initially serves as an unsatisfying shock to the audience as it questions whether the tale of the wandering Jew actually is just a myth.

But before the upsetting mood can settle, the librarian provides a dose of optimism when he closes “Underneath the Lintel” with an elaborate dance down the stage and into the aisles. Shaking his hips while attendees clapped along to the beat, he promises to continue his dance around the globe in search of the wandering Jew.

The play ends on a hopeful note, satisfying the audience’s support of the ragged old librarian and his quest for purpose.