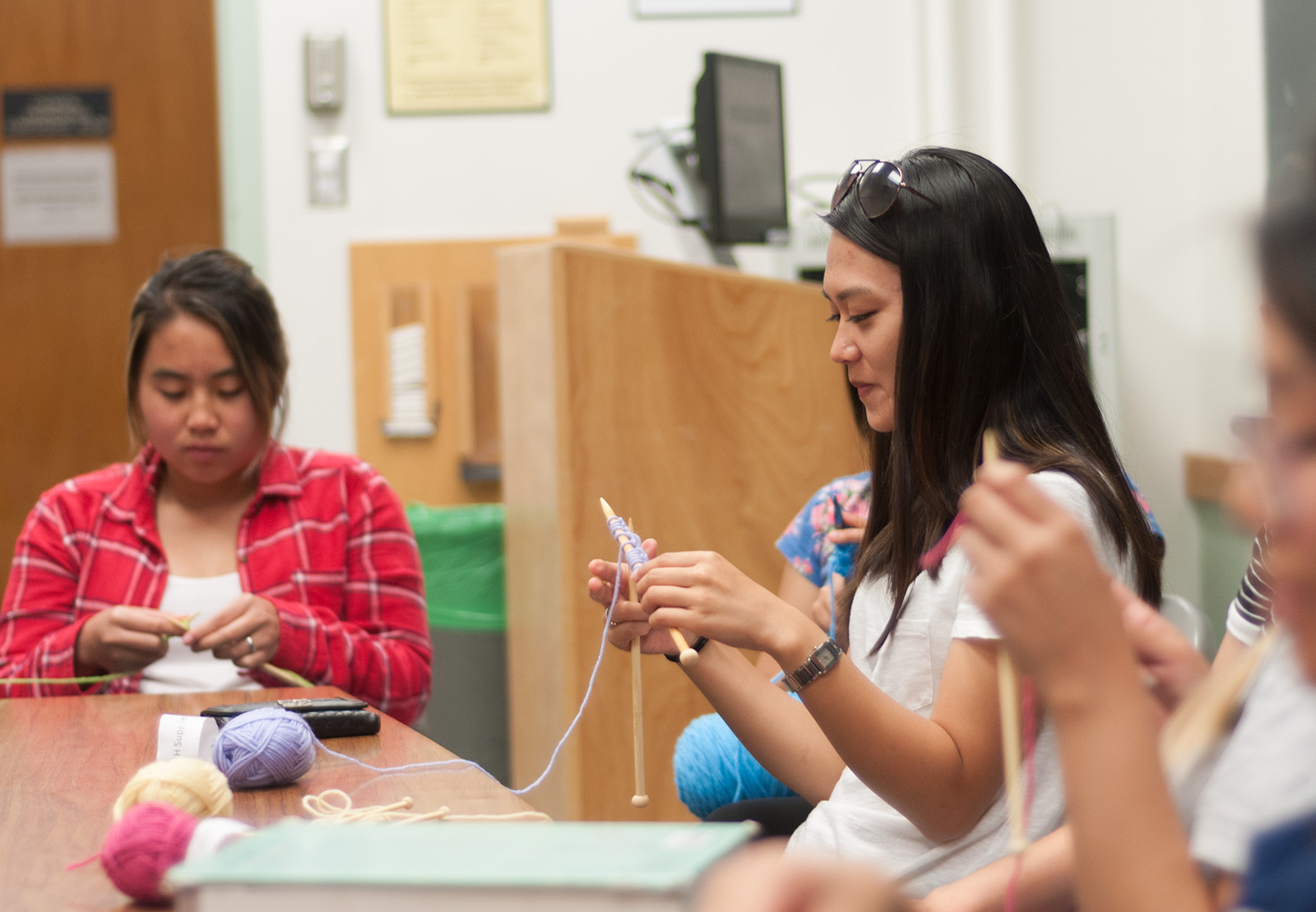 Yoon Lee, a third-year molecular, cell and developmental biology student, started the i-Knit-tiative club at UCLA during her freshman year. At club meetings every Monday night, members work on various projects including scarves and beanies, which the club is hoping to donate to homeless shelters around Los Angeles later on in the quarter. Members can learn how to knit, crochet or other forms of needlework. (Hannah Burnett/Assistant Photo editor)

Yoon Lee’s mother taught her how to knit in the sixth grade, using chopsticks as needles.

The third-year molecular, cell and developmental biology student has been knitting ever since and started the i-KNIT-iative knitting club her first year at UCLA. At the club’s Monday night meeting, she joined approximately 15 other students at a round table in Boelter Hall 5514, as she recounted how her interest in knitting stemmed from being a bored kid.

The club meets every week in Boelter Hall, providing a space for members to learn how to knit, crochet and do other forms of needlecraft, while socializing and de-stressing in the process, Lee said.

The club is also working to produce scarves and beanies for donation to homeless shelters around Los Angeles at the end of fall quarter. While members bring their own projects, the club supplies materials such as bags stuffed with yarn and knitting needles for members who plan on donating their finished product.

“Our actual mission statement is to spread the joy of needlecraft while also spreading the warmth and love of needlecraft,” Lee said. “Not just teaching people how to knit but also doing something with our actual products.”

Lee was involved in a similar organization at her high school in northern California. She started a knitting club in her freshman year with other avid knitters. After knitting all year, they collected the scarves they had made and donated them to hospitals in the Tenderloin district of San Francisco.

“I could enjoy not just the process of (knitting), but also the result of it,” she said.

At Monday’s meeting, Lee instructed a member on how to start the initial row of knitting stitches, while the din of chatter rose above the clacking of sharp, wooden needles. Throughout the night, she employed knitting puns, calling the yarn “knotty” and describing the group as a “tight-knit community.”

“You guys are super good now,” she said, turning to the members beside her.

Caroline Schreck, a second-year environmental science student, joined i-KNIT-iative last year with no prior knitting experience. She said she was able to knit on her own after her second meeting – albeit a little clumsily. Schreck still has the first scarf she knit, half blue and half yellow, and plans on wearing it once the weather turns cold.

Schreck said knitting also helps with controlling her OCD and anxiety, because it distracts her while keeping her hands occupied.

“That’s one of the biggest reasons that (this) is something I kept doing, (it’s) because it was super relaxing,” she said.

Keitty Calderon, a third-year ecology, behavior and evolution student, attended her first meeting Monday. As she rapidly produced rows of garter stitches from a bright pink roll of yarn, she said she began knitting at the age of 13 after her mother taught her the basic steps.

Her past projects include a blanket for her rabbit and a hat she crocheted for her mother. Calderon said she typically knits while doing other activities such as watching TV, and enjoys the repetitive nature of the craft.

“(Knitting) is just a simple kind of action to make something larger,” Calderon said.

Schreck said the club has allowed her to meet people from different years and majors. Lee and other older members of the club were the first upperclassmen she had met at UCLA, she said.

“It’s easier to make friends, I think, when you’re all bad at something, and then you learn together,” she said.

People are able to bond quickly over knitting, Lee said. In addition to learning and teaching needlecraft, members participate in group events such as movie nights and fundraisers.

“Whenever you meet another knitter, even just on the street or something, it’s like one of those things where you automatically become friends,” Lee said.