The Quad: Buildings of UCLA, a history of philanthropists 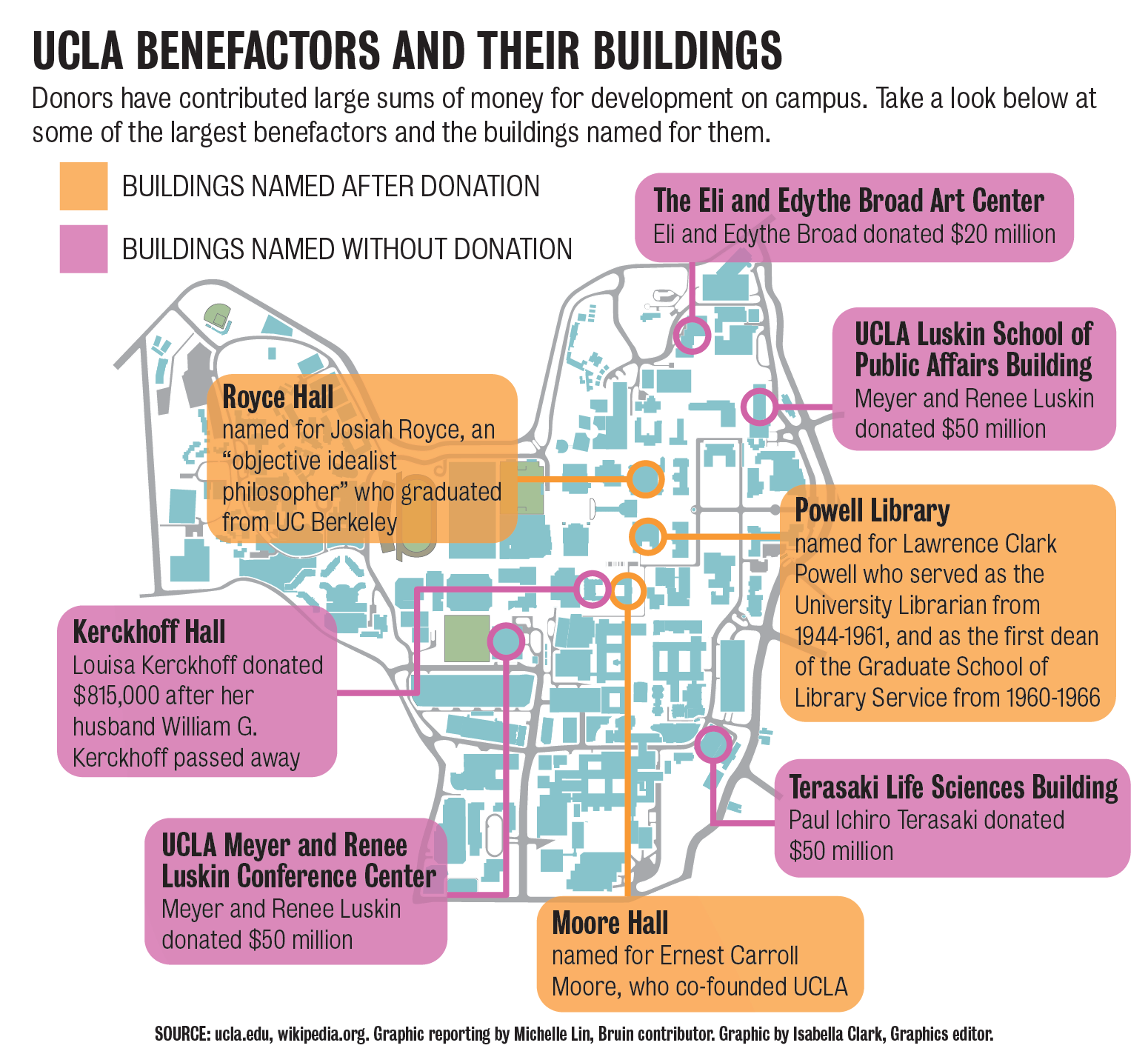 If you think about it, it’s a bit weird that almost all of the buildings on UCLA’s campus are given people’s last names. Geffen, Luskin, Broad, Powell – UCLA students utter these names with familiarity on a regular basis, although we associate the names with a building or a professional school rather than the individuals themselves.

UCLA is a large public school, but aside from state funds it also depends on private donations. Some of the buildings on campus were named after these major and notable donors – although some weren’t named as the result of a donation. For a university that’s not quite 100 years old, many influential and important people have already left their mark on our buildings and professional schools.

In 2002, Geffen donated $200 million in unrestricted endowment to UCLA’s school of medicine. This is the largest single donation in UCLA’s history, and is why the medical school is named the David Geffen School of Medicine, even though Geffen himself has no relation at all to the medical field. Geffen is also UCLA’s largest donor and has given more than $400 million to UCLA. His other donations to UCLA include $100 million to establish a scholarship fund for Geffen School of Medicine students, and another $100 million to establish the Geffen Academy, a new secondary school that is affiliated with UCLA.

Meyer Luskin is the president and chairman of Scope Industries, a company that recycles bakery waste materials into an animal feed ingredients. Both Meyer and Renee Luskin are UCLA alumni.

The Luskins have donated a gift of $100 million to UCLA in 2011, which was the second largest gift the university has ever received at that time. $50 million went to naming the Luskin School of Public Affairs Building, and the other half went to establishing the UCLA Meyer and Renee Luskin Conference Center. The conference center opened in August 2016 as an on-campus meeting space to host academic events and summits. It also serves as a hotel to school guests.

Eli Broad is the owner of two Fortune 500 companies, SunAmerica Inc. and KB Home, and didn’t have any affiliation with UCLA prior to his philanthropy.

Paul Ichiro Terasaki earned his bachelor’s, master’s and doctoral degrees in zoology at UCLA. He was a UCLA professor emeritus of surgery and a pioneer in organ transplant medicine, developing the standard procedure for tissue typing.

Terasaki donated $50 million to the division of life sciences, the largest gift ever given to the UCLA College of Letters and Science.

Pauley Pavilion is named after Edwin W. Pauley, a University of California regent who donated around $1 million to the building by matching alumni gifts.

William G. Kerckhoff was a businessman who owned many companies in the power, electricity and gas industry, and helped develop Beverly Hills as a residential place.

In 1931, his widow Louisa Kerckhoff donated $815,000 to build Kerckhoff Hall in his name to fulfill his dying wish of providing funds for a student union.

Not all of the named buildings on campus were because of a donation. Here are some of the notable buildings that were named in honor of someone.

Royce Hall was named after Josiah Royce, an objective idealist philosopher who graduated from UC Berkeley.

Powell Library was named in honor of Lawrence Clark Powell, who served as the university librarian from 1944 to 1961.

Ernest Carroll Moore co-founded UCLA, and Moore Hall was renamed after his death in his honor in 1955.

Although we often joke around and give Chancellor Gene Block the status of a founding father of UCLA, the reality is that these people have had and will continue to have a stronger and more lasting impact on UCLA.

If you have an extra million dollars laying around after graduation, perhaps you can get the humanities or the physics and astronomy building named after you and join the greats of Luskin, Geffen and Broad.