A Taste for Adventure: Silkworm soup flavor surprises, texture proves to be deal-breaker 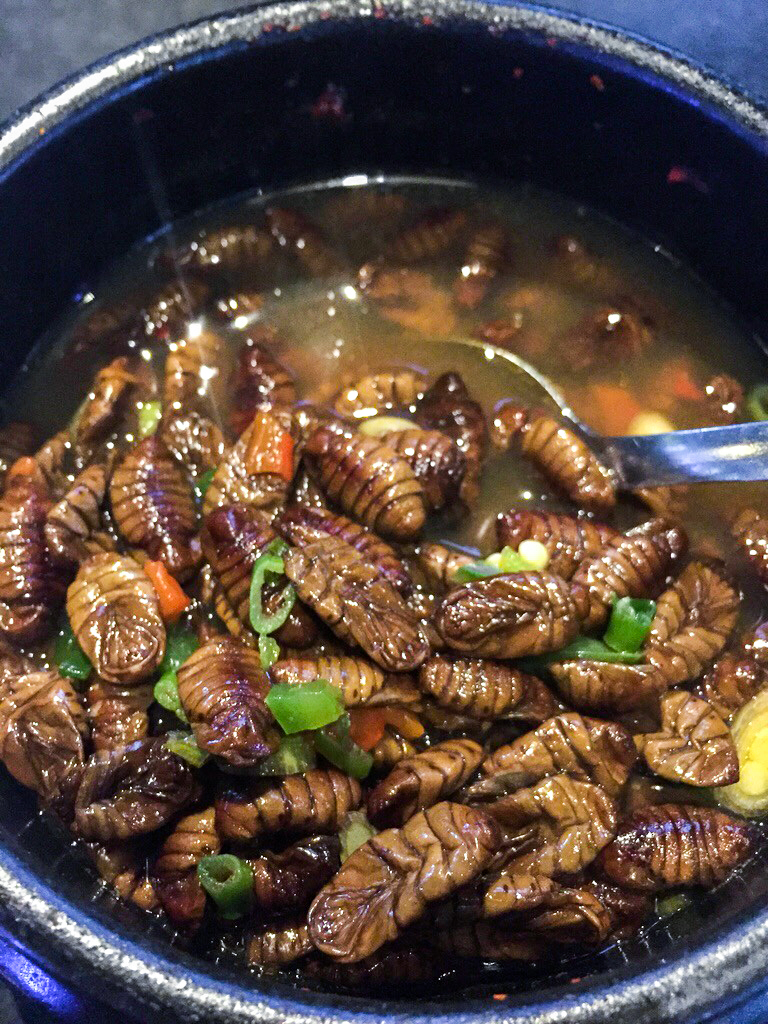 Mok Maru Jong Sul Jip, a bar in Koreatown, serves silkworm soup off the menu. The silkworms had a firm exterior and a grainy interior. (Matthew Fernandez/Daily Bruin staff)

“The Lion King” was one of my favorite movies as a kid. I especially loved the scene in which Simba eats bugs for the first time, declaring the colorful bugs “slimy yet satisfying.”

But after trying some worms myself, I disagree.

Last week, my roommates and I drove to the Mok Maru Jong Sul Jip sports bar in Koreatown to try my second bug-related dish for my column – silkworm soup.

After braving an hour’s worth of rush hour traffic, we arrived at our destination: a small bar and restaurant nestled amid the shopping plazas and restaurants of Koreatown.

Silkworm soup is an off-menu item at Mok Maru Jong, but I called in advance to make sure the restaurant served it.

Silkworms are a traditional Korean delicacy, either cooked in a soup, steamed or eaten plain as a quick street food snack. In some Asian countries, silkworms are eaten as a way to dispose of the byproducts of the silk industry, which boils the worms to harvest their silk cocoons. Silkworms also have health benefits, helping to control diabetes.

But when I put in my order, the waitress paused and looked at me with a bewildered expression. She asked me if I was sure about what I was ordering and said that even as a Korean woman, she doesn’t like silkworms.

Although a little apprehensive, I told her I was sure and it couldn’t be that bad. But I was wrong.

The soup, served in a small black bowl, featured a barely submerged, dense pile of silkworms with a few, stray pieces of peppers and green onions. The silkworms were about the size of large beans, although more wrinkled, similar in appearance to a bowl of bean chili.

First I tried the broth, a thin and watery liquid with a reddish brown color and a deep earthy scent. The soup tasted like an ambiguous mix of savory spices with a slight hint of pepper.

Next I tried the silkworms, first without the soup and then with it. By themselves, the silkworms don’t have much flavor. They’re bland with a slight taste of dirt and green beans.

But when I tried a worm with the broth, the blend of spices took over my palate, and I couldn’t taste the worm at all.

The most notable part of the silkworms, aside from how they look, is their texture. When I first put the worm in my mouth, its skin created an initial crunchiness, like that of a firm berry. However after applying a little pressure, the body popped, releasing the innards into my mouth.

I immediately noticed a change in texture. A grainy, creamy paste filled my mouth, contrasting with the initial smoother feeling of the skin. However, the insides were easy to swallow, leaving me with just the skin to chew – an unusual texture that was both crunchy and soggy. The rapid changes in texture was uncomfortable for me, and I could only eat five more worms.

Compared to my previous experience with escargot, which was seasoned with garlic butter so rich that I almost forgot I was eating snails, the cooks at Mok Maru Jong didn’t try to dress up the dish or disguise the bugs.

While the subtle flavor of the silkworms was manageable and easily masked by the soup, the contrast in textures from crisp skin to oozy innards was a deal breaker.

This is the last time I’ll take Disney’s advice on culinary matters.