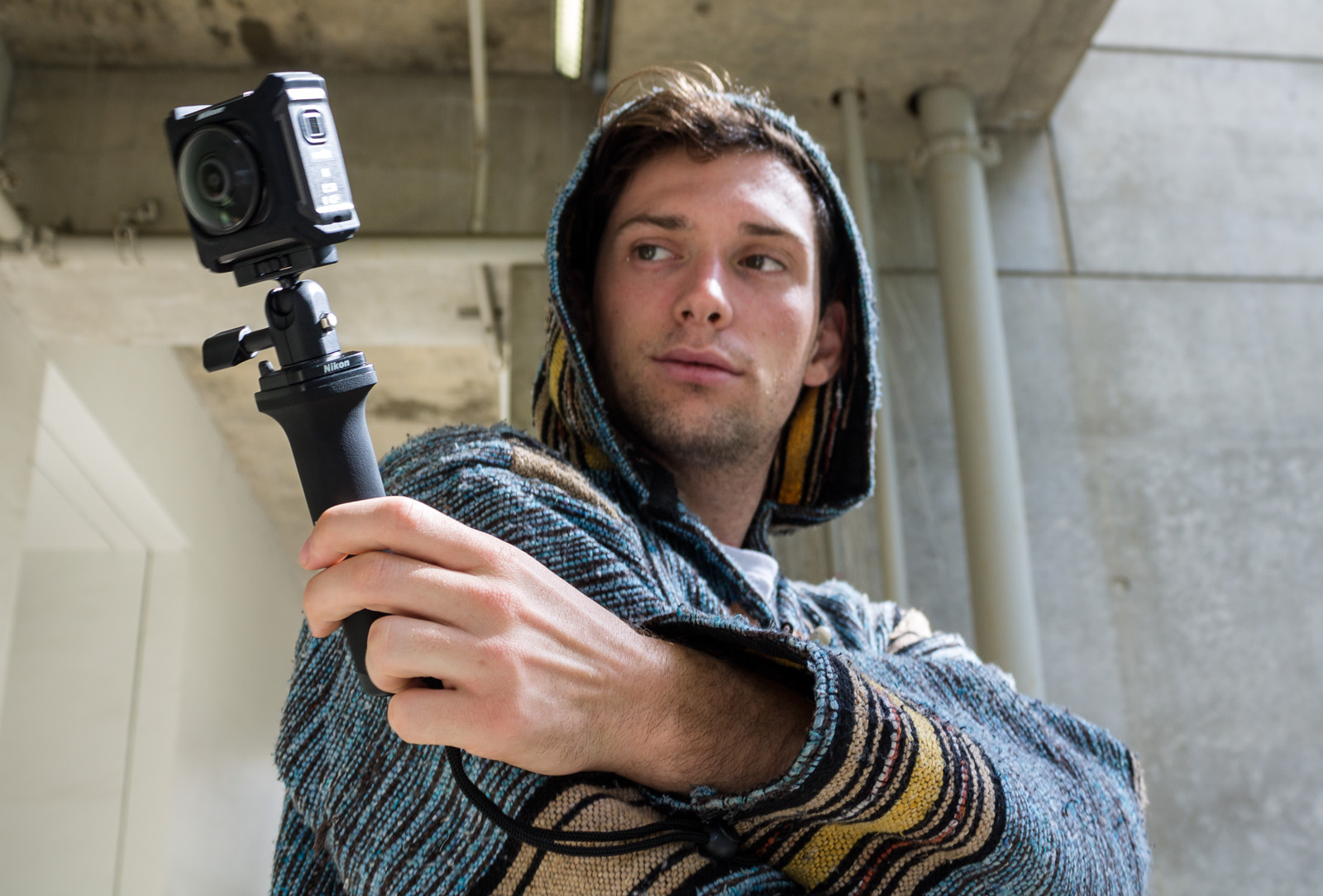 Second-year Design | Media Arts student Nate Mohler uses a 360-degree camera to make immersive short films and to document his artwork. Mohler shot one of his short films, “Staring Contest,” in an abandoned warehouse. During the staring contest, the viewer’s opponent’s head explodes, and the viewer can look around at the newly blood-spattered walls. (Manpreet Grewal/Daily Bruin)

Nate Mohler had to translate a Korean instruction manual the first time he operated a 360-degree camera.

The Samsung Gear 360 camera, which was so new at the time that it didn’t even come with English instructions, has come into the mainstream since Mohler first picked it up in the summer of 2016, he said.

The technology has become popular enough that regular users can upload 360-degree videos to platforms such as YouTube and Facebook without much film experience or technical knowledge.

Over the past year, the second-year Design | Media Arts student has found numerous applications for the medium, such as creating immersive short films and documenting his artwork.

“I’ve always really wanted to wow people and bring them into a new experience,” he said.

Mohler encountered the 360-degree medium by accident while interning at Trainrobber, a virtual reality studio, in summer 2016. He was experimenting with Cinema 4D, a motion graphics software used for animation, when he learned how to render videos in a 360-degree format.

The process of creating a video using 360-degree technology versus traditional film is similar, Mohler said. The image the camera captures resembles a flattened globe, where the top and the bottom are stretched out and the middle resembles a panorama. Mohler then uses an editing software such as Adobe After Effects to wrap the two-dimensional images into a 360-degree video, focusing on postproduction elements such as removing stitching gaps and stabilizing the moving shots.

When Mohler first started working with 360-degree cameras, he experimented with different test shots. He walked around Venice Beach wearing a motorcycle helmet with a camera attached, garnering confused looks from people passing by. His interest in the 360-degree medium then expanded to creating narratives.

Mohler worked on a short film, “Staring Contest,” beginning in July 2016, which featured Tay Zonday, the singer from the viral “Chocolate Rain” YouTube video. The short film, shot in an abandoned warehouse on the top floor of a downtown Los Angeles building, places the viewer at a table as the actor walks in and engages in a staring contest. After a few moments, Zonday’s head explodes and the viewer looks around at the blood-splattered walls.

Director Stephen Reedy used the 360-degree format to emphasize the uncomfortable nature of eye contact. Knowing that the actor is still staring at you when you look away makes you squirm as a viewer, he said.

“You’re trapped in this environment that is very ripe to freak you out, in a way that you really can’t in any other medium,” Reedy said.

Being able to explore a 360-degree environment with a turn of the head emphasizes a sense of closeness, Mohler said.

Mohler also uses 360-degree technology to document class projects. For an installation he created for his design class in April, titled “The Red Room,” he projected fluid, black and red animations onto a set of three blank walls, set to a remix of the Migos song “Bad and Boujee.”

He wanted people who hadn’t seen the project to be able to feel as if they were actually there by recording it in 360 degrees.

“One of the most important things about doing any project is documenting it well,” Mohler said. “It’s one thing to just take a picture of it and put it on Instagram and another to take the time to really record it, really take video of it from different angles.”

“(Mohler) created this illusion, this world that people could really get lost in,” Batle said.

The experience of seeing “The Red Room” through a phone doesn’t quite measure up to seeing the installation firsthand, Mohler said. However, he tried to emulate the immersive experience by filming the installation in 360 degrees and editing the video with some of the original animations to fix the dark lighting and blurry images produced by the camera.

Mohler hopes to experiment with virtual reality games where users are even more immersed in a simulated space. The applications for 360-degree technology are still experimental but quickly growing, he said. The technology can be used for everything from video journalism to advertising to highly immersive thriller films.