A Taste for Adventure: Comparing the pungent aromas of jackfruit, durian 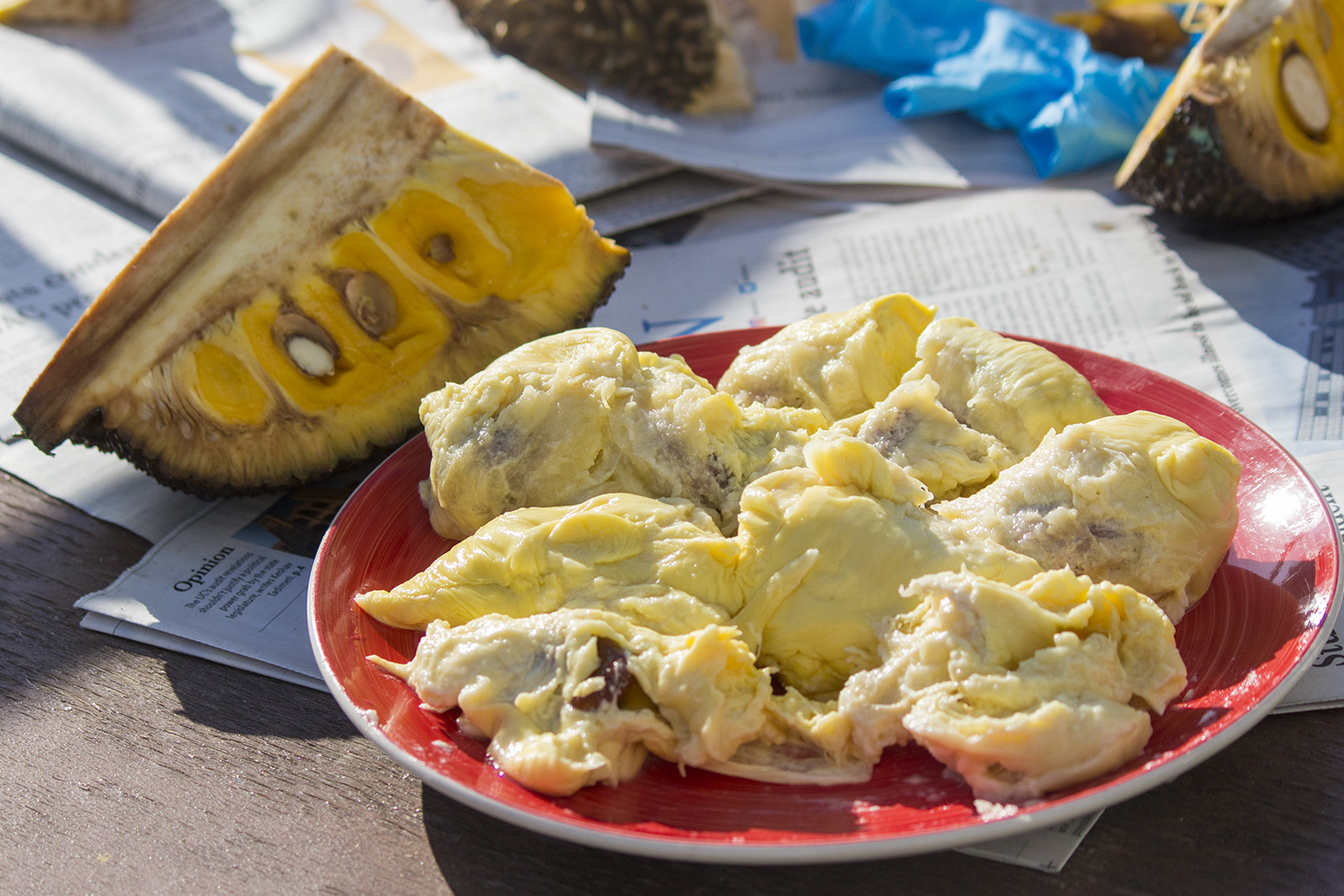 The meat of the durian fruit comes in yellow pods, which have a light, crispy outer skin and a gooey inside. Durian is sold at the Seafood City supermarket for $15. (Hannah Johnson/Daily Bruin)

I eat a lot of fruits – mainly apples, grapes and tangerines, which I buy in bulk whenever I go to Costco. But the fruit I ate this week can only be found in specialty supermarkets.

The durian fruit, native to Southeast Asia, looks like a medieval weapon due to its spiny outer shell and is infamous for its strong odor. I’ve heard people describe the scent of the fruit as everything from strong almonds to gym socks. The fruit is even banned from mass transit and public consumption in some countries.

Naturally, I wanted to smell it for myself.

I bought the durian during my trip to the Seafood City supermarket last week. Since there were only two left in the freezer section, I grabbed one at random – an oval-shaped cluster of spikes about the size of my head, priced at $15.

During my search for durian, I decided to pick up another spiky fruit as well – a jackfruit. The jackfruits at the market were about the size of my torso and cost about $2 per pound, so I only bought a small, precut section for $6.

Some of my friends have eaten durian before, so I asked them to show me how to prepare it with the promise of free fruit. As a precaution, I decided to cut it on my balcony, so it wouldn’t stink up my apartment. I also lined my table with several pages of newspaper and put on three pairs of surgical gloves, so the smell wouldn’t stick to my hands.

I took a knife and cut into the fruit’s tough, spiny hide. It was difficult at first, but eventually I made a big enough cut that I could use my hands to tear the hide apart, similar to ripping a deflated basketball into pieces. My roommates, friends and I all braced for the smell.

I’m not sure if it was because the durian was unripe or because I had kept it frozen, or a combination of both, but the fruit didn’t smell that bad. Don’t get me wrong, the sour odor wasn’t pleasant, but it wasn’t the strong, pungent fragrance I was expecting.

The meat of the durian came in long yellow pods – oblong-shaped and slightly wrinkled. The outer skin of the pods were also fragile, and I broke a few of the pods while plating them, spilling out their off-white, gooey insides.

I then tore a piece off of the pod and popped it into my mouth. The texture was unlike any fruit I’ve had. The outer skin had a light crispness to it while the inside was a soft, paste-like substance that did not require much chewing.

The taste was even more unusual. I was expecting a vaguely sweet flavor like most tropical fruits I have eaten, but the custardy durian meat had a salty undertone to its sweetness. It was not unpleasant, but not exactly something I’d put into a fruit salad or a smoothie.

Eating jackfruit was a more pleasant and familiar experience. Usually when I eat it, it’s either canned or part of a dessert dish, so I’ve never had to cut one myself. The meat was in pods, each surrounding a large seed. Since I couldn’t figure out how to extract the pods of fruit from their thick husks, I used a kitchen knife to cut the meat free and dug it out with my hands.

The jackfruit smelled worse than the durian. It had a sickly sweet smell that filled up our minifridge. I enjoy eating jackfruit because of its sweetness, like a cross between a mango and a peach, but since I usually eat it canned, I had always assumed that its sweetness was partially due to the syrup.

Texturewise, jackfruit is similar to a peach, except slightly more fibrous, with the juiciness of a ripe mango. All in all, a pleasant experience for my tastebuds. Unlike the durian, jackfruit was more closely aligned with my idea of what fruit should taste like, and I much preferred its hearty sweetness to the unfamiliar savoriness of the durian.

That’s not to say I’ll never eat durian again, but I’m definitely not going to go out of my way to find it.