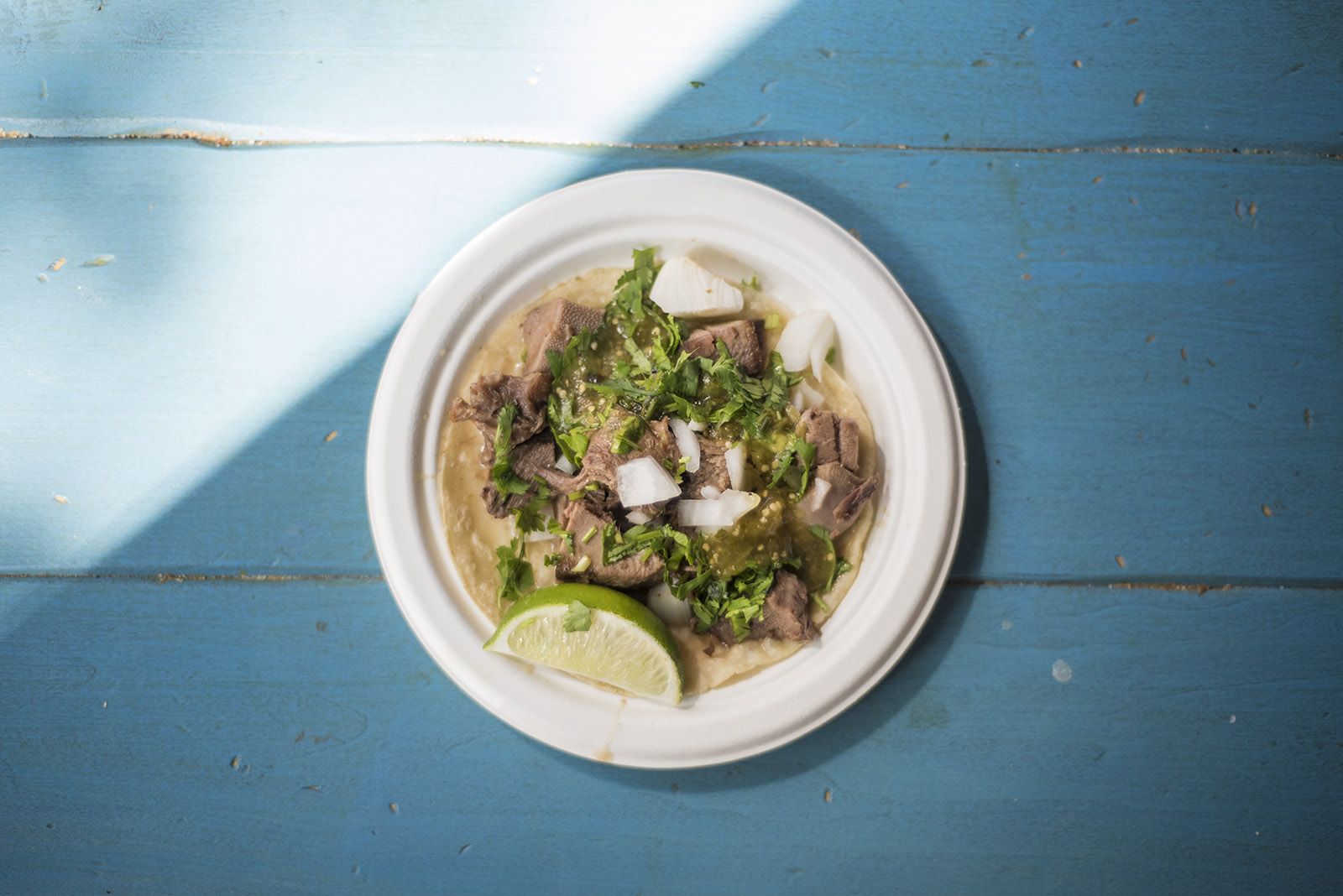 Run by brothers Miguel and Jorge Anaya, Pinches Tacos in Westwood sells a lengua, or cow tongue, taco. Salted and served with salsa, the lengua taco had a tofu-like consistency.(Wesley Hardin/Daily Bruin)

Some of my roommates and I recently debated whether or not cows are cute.

They were firmly on the “yes” side while I was a staunch “no.” That’s not to say I don’t like cows – in fact, I do love a good beef taco.

However, some parts of a cow might not taste as delicious on a tortilla as ground beef.

In many cultures around the world, every part of the animal is eaten or put to some other use. Historically, I have limited my beef consumption to steaks, burgers, ribs and stews, but I can now add cow tongue, intestines and brains to my beef eating repertoire.

My first time eating cow tongue was last week, even though I’d known about it – and actively avoided it – ever since I saw it at the Filipino supermarkets I went to as a child.

Beef tongue, when raw, is a thick piece of gray meat with prominent taste buds and a body that’s so long it has to be folded in half just to fit on the provided tray. There’s something disconcerting about eating a piece of muscle that my food used to eat food, an idea I found a little bit too meta, like the world’s most extreme French kiss.

My first experience with tongue came from Pinches Tacos on Glendon Avenue in Westwood. Their lengua was marinated in salt, pepper and laurel leaves and served with salsa on top.

The first thing I noticed about the tongue meat was how much softer and chewier it was than other cuts of beef, an almost tofu-like sponginess. I’m not sure if it was because of the laurel leaf marinade, but the tongue also had a much gamier taste than I’m used to.

The next night, for a post-training UniCamp social we ate at the Tacos Super Gallito food truck on Santa Monica Boulevard and Westwood Boulevard that served lengua tacos along with other bovine bits, including cow brain and cow stomach.

The food truck’s lengua was firmer than the beef tongue at Pinches Tacos and tasted more like under-seasoned steak. Among the three tacos I tried at the truck, the lengua was the best quality cut of meat.

[Related: Flavors of Westwood: Alumni share a taste of home at Pinches Tacos]

Brains are another matter entirely. As I prepared to eat the food truck’s cabeza tacos, I felt apprehensive about eating another animal’s brain, both because of texture and taste; however, the experience was even less enjoyable than I expected.

The meat was drier and chewier than films make it look. The tacos were pretty bland, too. I added some flavor by piling on salsa and onions, but even that couldn’t mask the dryness of the brain tissue.

The worst of the tacos was the tripe, which is the culinary term for cow stomach. I know people who love tripe or “cow guts” as Tacos Super Gallito refers to it, but I’ve had tripe in pho, at a dim sum restaurant and now in a taco, and no matter the culinary medium, I still don’t like it.

The tripe was so chewy that it was difficult to eat. I spent a long minute just trying to chew one piece of the cow stomach before I even took a bite of the taco. The tripe left a bitter, acidic taste in my mouth long after I had swallowed and tried to wash down the flavor with soda.

After trying it three different ways, I think I’m done eating the stuff.

Out of all the tacos, the lengua at Pinches Tacos was my favorite, and I’d be willing to try it at other restaurants to see if the texture and flavors vary as much as they did between the restaurant and the food truck.