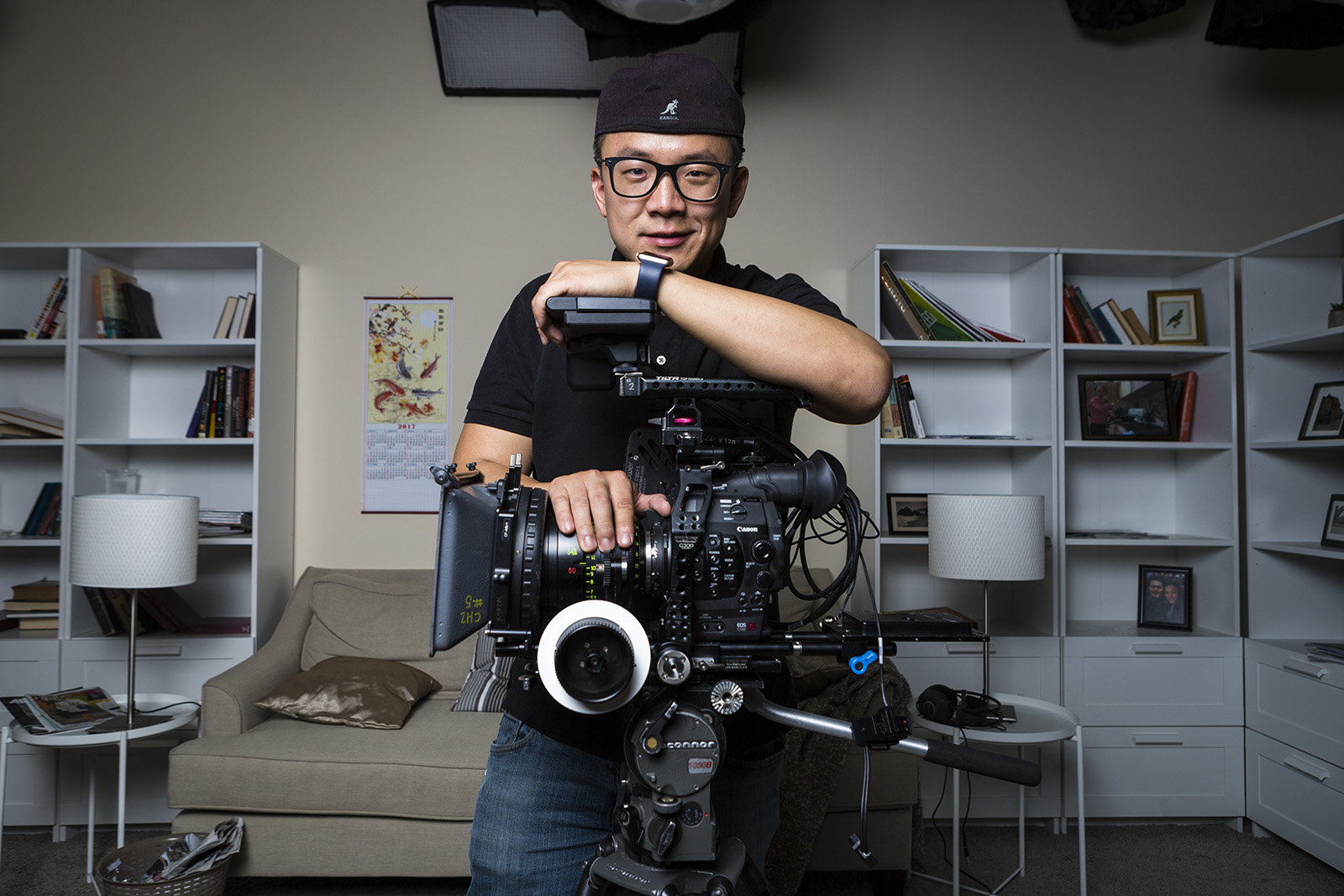 Cinematography graduate student Xinzhong “Golden” Zhao directed a commercial that placed second in a contest hosted by Regal Cinemas and Coca-Cola. In the ad, a hacker reaches out of a movie screen and grabs some buttery popcorn from a moviegoer. UCLA students filmed the commercial in Regal La Habra Stadium 16 in January. (Jintak Han/Assistant Photo editor)

Coming soon to a theater near you: a hungry hacker trying to steal your popcorn.

In Zhao’s commercial, an on-screen character frantically types on a computer and hears the slurp of a soda and the crunch of popcorn kernels coming from the movie audience. He reaches past the movie screen into the theater seats to grab some for himself.

“Our idea was to bridge the connection between audience and screen,” Zhao said.

Teams from schools across the country began pitching their commercial ideas in November, and then from around 6,000 scripts, five finalists were chosen to film and submit their commercials by March 15, Zhao said.

Zhao’s past commercial experience includes shooting advertisements for WaterO and Aston Martin. Creating a commercial entails stricter limitations on screen time and narrative freedom because of its corporate nature. Since there are fewer scenes, each requires a greater attention to detail which aids in the process of crafting longer feature films, something Zhao ultimately aims to do as a cinematographer.

A commercial must tell a story in addition to addressing the company’s needs, which are subject to change during the filming process. As a cinematographer and director, Zhao said his focus is on selling a concept: promoting a product through close-up shots of an ice-cold soda with drops of water running down the side, for example.

“With a narrative, you can tell any story you want,” he said. “For commercials, you cannot.”

Zhao filmed two different endings to his commercial and consulted with representatives from Coca-Cola and Regal Films to gauge their preferences. One depicted a moviegoer on the other side of the screen keeping the popcorn for himself in a comedic twist, while the other shows him offering up his popcorn to the protagonist. Ultimately, the latter ending was chosen to fit the theme of sharing the movie-watching experience.

Contest officials provided advertising advice and filming equipment to teams throughout the scripting and editing process, said Aviva Kleiner, the project producer for the Regal Films and Coca-Cola film program.

“We gave them experience to really immerse themselves in the brand and get tips on how to make the best commercial-grade spot,” she said.

The five finalists were also allowed to use Regal Cinemas for filming, as well as a $15,000 budget. Zhao filmed his commercial at the Regal La Habra Stadium 16 theater in late January.

The short runtime for the commercial meant that the team had to be strategic with its story, Zhao said.

“Thirty seconds is so, so tight,” he said.

The film team restructured the commercial in order to fit the time frame. Originally, the story had a sidekick character who counted down the time the protagonist had left before computer systems would shut down, but he had to be cut entirely.

The script was only a half-page long, but filming the commercial took two 12-hour shoot days, Lafrentz said. In one scene, the hacker throws a Coca-Cola cup back through the screen to the moviegoer, which took around 17 takes.

Although filming commercials is different from constructing longer narratives, Zhao said the process gave him valuable tools for shooting feature films, such as learning to make rapid changes to the set and lighting.

Through the detailed cinematography process, Zhao memorized the formula for adjusting the scene: Set up the appropriate camera track and shape the angle and color of lighting so that it evokes the style the director envisions.

Having already worked on a feature film, he hopes to apply the steps to future features, which require shooting up to 15 scenes per day without having time to learn on the spot, he said.

“Doing commercials is my job,” he said. “Film is my passion.”