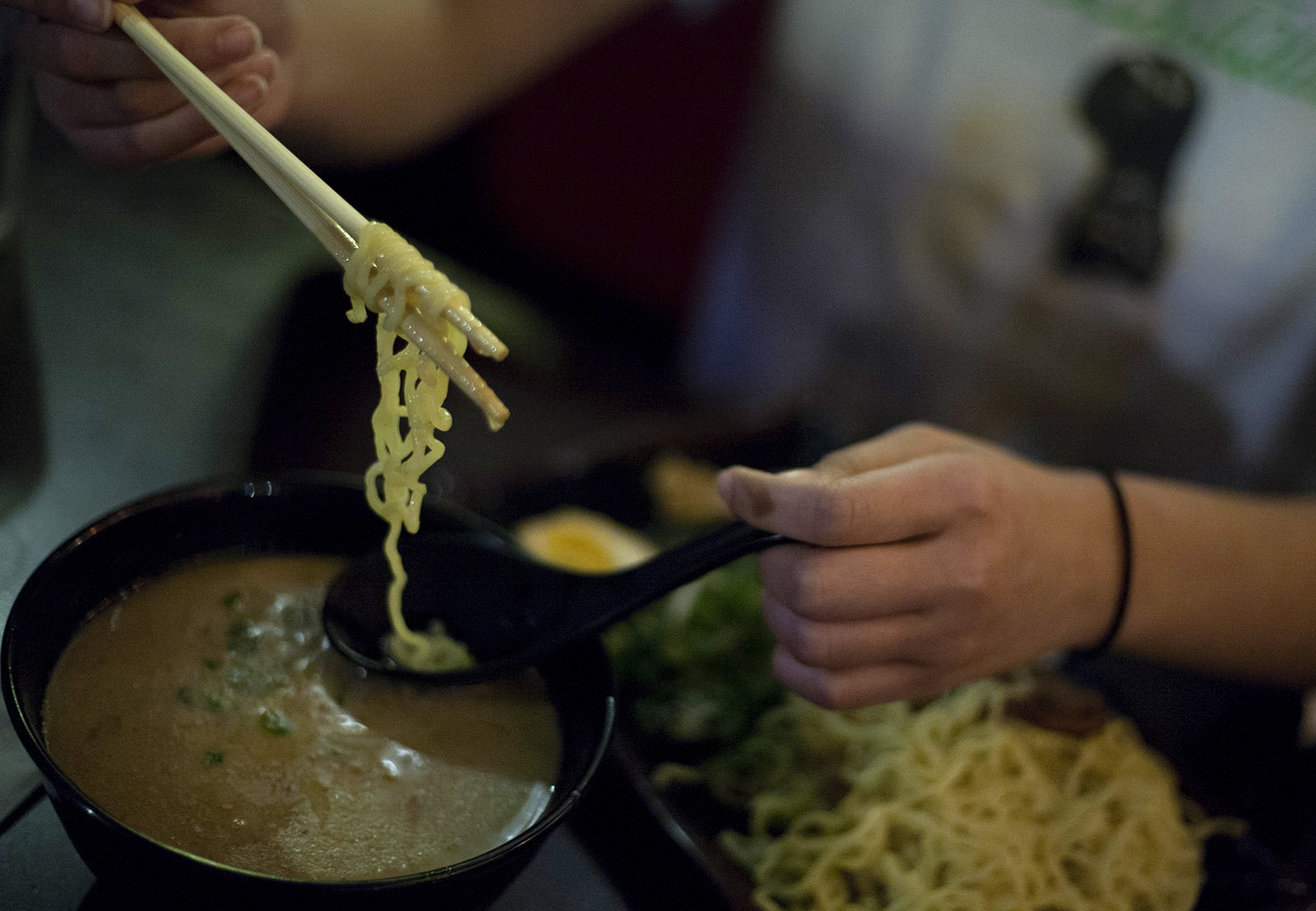 Finding a delicious restaurant in Los Angeles can be difficult among the city’s thousands of dining options. To help readers narrow down their search, the Daily Bruin will review restaurants located along main streets near UCLA each week.

Sawtelle Boulevard has become a mecca for ramen in Los Angeles. Daily Bruin Arts & Entertainment pits three restaurants at the top of the ramen hierarchy – Tsujita Annex, Tatsu Ramen and Daikokuya – against one another in an ultimate battle of the bowls.

Dining at Tsujita is like running a culinary marathon.

Approach the flora-covered façade with an empty stomach and a sizable appetite – and be mentally prepared for what lies behind.

Tsujita’s most famous dish is the Tsukemen, or dipping ramen, which consists of cold noodles served separately from a thick, pork-based broth. An illustrated tutorial on the wall instructs customers to correctly eat the dish by saturating the noodles in the broth and then eating them with the bean sprout and meat toppings that come in the soup bowl.

The method prevents the noodles from becoming too soft from sitting in the broth.

The noodles are thicker than average ramen noodles and the broth, containing pieces of pork fat, is heartier than typical ramen broth. Submerged in the soup, a generous portion of fresh bean sprouts is served with thick-cut slices of pork so tender they fall apart.

Everything about the dish is indulgent.

The broth clings to the dipped noodles and offers a rich, meaty flavor, lacking the sometimes overwhelming saltiness of most ramen broths. Since a quick water break was necessary to alleviate the heaviness of the broth, a greater variety of toppings such as green onion and lighter vegetables would have helped balance the dish’s fattiness.

Although the deep flavors and modest presentation of the ramen are comforting, getting through the dish is a test of endurance and requires thoughtful pacing. Each greasy bite weighs down the stomach and conscience. However, considering the reasonable price-point at $10.95, customers definitely get their fill.

Ordering takes place on iPads outside the entrance, where customers can choose between different ramen bases and toppings prior to being seated. It shortens the wait between sitting down and receiving the food, making the total wait time appear shorter.

The space appeals to a younger crowd with its mix of pop music and electronic beats playing in the background, including a classic throwback Fergie song. A large flatscreen TV behind the communal table displays a time-lapse of urban Japanese scenes.

Tatsu’s signature dish is the Soul Ramen, served in a Tonkotsu broth with customizable amounts of toppings such as wood-ear mushrooms and green onions, along with a choice of pork, chicken or tofu.

The broth has an unmistakable fishy flavor, which led to some overpowering bites with inconsistent saltiness. The noodles are thinner than Tsujita’s, and the broth is soupier in consistency, yet creamy, which results in a lighter, easier meal. Tatsu’s ramen is also more cohesive since the noodles and broth are cooked and served together.

The menu also includes trendier fare, such as vegan broth and a ramen burger.

Tatsu is an accessible option for ramen novices who may be intimidated by the more intense flavors at Tsujita. However, at $13 a bowl, there are cheaper options with superior flavors and authenticity.

Daikokuya hits the perfect medium between Tsujita’s rich palate and the lighter ramen that Tatsu offers.

The Tsukemen at Daikokuya is prepared differently than Tsujita’s dipping ramen. All of the toppings and the noodles are presented – deconstructed – on a platter. The broth comes in its own bowl, without any extra toppings inside.

Though the same price as Tsujita’s Tsukemen, the ramen comes with more toppings, such as heaps of green onion and a perfectly runny egg.

The noodles are thinner, which makes them easier to dip and eat, and the broth itself is the same consistency as typical Tonkotsu broth, only saltier.

Although Daikokuya is not as well-known for its Tsukemen, it’s a friendlier, less weighty dipping ramen option that’s worth a try. Customers also have the freedom to eat as many toppings as they want at a time, which prevents the ingredients from getting soggy.

With only three ramen dishes, Daikokuya has less options than Tatsu, but each dish feels more homemade and authentic, without the need for fancy ingredients. The savory broth is also more balanced – not leaning strongly towards any particular flavor.

The interior of the restaurant has the most character of the three shops; the walls are decorated with lighted signs and realistic shop windows, replicating the feel of eating street food in Japan. The space is gently illuminated by glowing red lanterns.

Daikokuya has the most limited ramen menu, but the widest range of appeal. The quality of the broth will satisfy the most seasoned ramen connoisseur, while classic flavors and textures are a good introduction for first-time ramen enjoyment.

Although viciously hyped and overly posted about on Instagram, Tsujita offers a bowl of Tsukemen that doesn’t appeal to everyone’s tastes. Tatsu offers unconventional options but at a higher cost. However, for a less expensive dinner than at Tatsu and a dipping ramen more palatable than at Tsujita, Daikokuya offers a light bowl of ramen worth its price tag.

We have a winner.