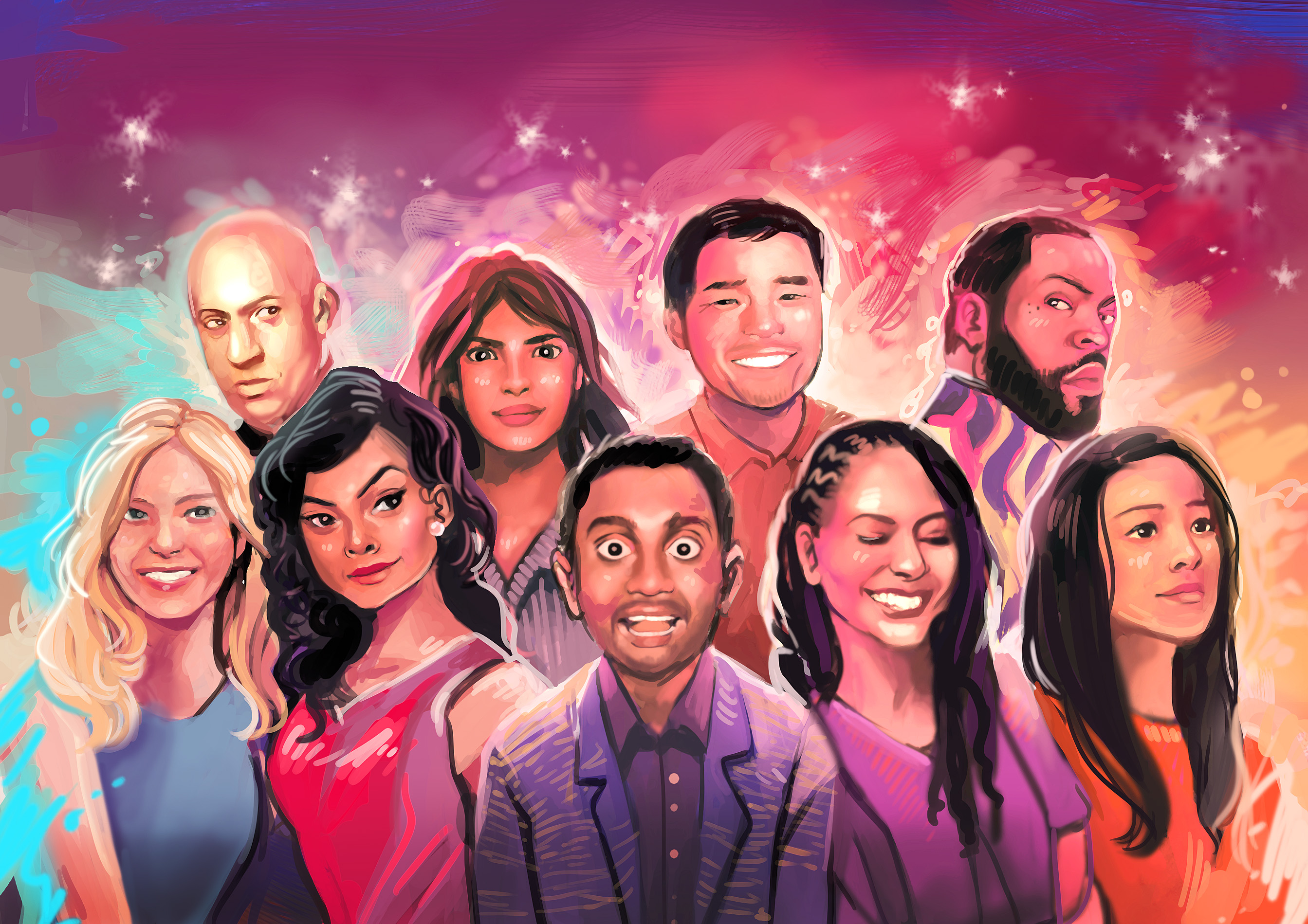 In Hollywood, the only color that matters is green.

But the types of films proven to make a lot of money are not always the ones that get made, said Darnell Hunt, the director of the Ralph J. Bunche Center for African American Studies at UCLA.

Films and television shows with diverse representation proportional to the population tend to make more money and get higher ratings, according to the 2017 Hollywood Diversity Report.

However, the report finds that in practice, women and minorities are underrepresented in projects that get made. The 2017 Hollywood Diversity Report seeks to draw attention to the inequity, change the conversation about representation in the media and shift the discussion from ethics to economics, Hunt said.

The report, released Feb. 21, comes out in the context of the 2017 Academy Awards, which honored black talent with “Moonlight” for best picture, Viola Davis for best supporting actress and Mahershala Ali for best supporting actor. All of the best director nominees were male and of the 13 screenwriters nominated, only one was female.

The 2017 report – the fourth installment of the Bunche Center’s Hollywood Diversity Report series – is titled “Setting the Record Straight” and is available on the center’s website. The 83-page report details the ways in which racial and gender underrepresentation occur in the film industry, both in front of and behind the camera.

The report has five authors, including Hunt and Ana-Christina Ramon, the assistant director of the Bunche Center. For Hunt, the study was a continuation of his work examining the relationship between race and media, a topic he began studying in 1993 with the U.S. Commission on Civil Rights.

“We started the series at UCLA at the Bunche Center in 2014 with a goal to intervene in public discourses about diversity and to find the facts,” Hunt said. “There were lots of anecdotes about Hollywood diversity or lack thereof, but there weren’t any really comprehensive studies that looked at everything, so that’s what our study does.”

The report analyzes data from the 200 highest-grossing American films from 2015 and every episode from the 2014-2015 television season in an intense research process that begins almost immediately after the publication of the previous report, Hunt said.

Tran originally began his graduate studies at the University of Oregon, but was dismayed by the lack of research on race and media, he said. Tran then transferred to UCLA, attracted by the university’s research in that area and Hunt’s expertise in the field.

When asked why he chose to get involved with the report, Tran chuckled.

“Because it matters,” he said.

For the 2017 report, the graduate student team pored over comprehensive databases, obtaining information from companies such as Nielsen, which provides data on TV viewership, and Rentrak, which conducts exit interviews with moviegoers. The students compiled a database in Excel, made up of around 100,000 cells that recorded information relevant to the project.

The team recorded facts such as the total length of the show, the races and genders of the characters, the billing order of the actors and the agencies that represent the program’s talent when cataloging a particular TV show, Tran said.

The data input took almost eight months, lasting until October 2016. After its completion, Hunt and Ramon ran it through a statistical program called Stata that helped the team generate charts and graphs and find connections between the data. The authors began to analyze the results and draw conclusions from their findings.

This year, the team found that while TV shows experienced a general increase in diversity, many trends from previous years held; both women and people of color in acting and creative positions remain underrepresented.

Women make up around half the U.S. population and minorities make up around 40 percent of the population. In contrast, film leads in 2015 were 29 percent female and 13.6 percent people of color.

The trends described in the report were a result of the structural inequity in Hollywood that muted minority voices, Ramon said. Women and people of color can’t be considered for roles that don’t exist, and female and minority writers aren’t being put in positions to tell their own stories.

“We need people that are in executive positions that will green light projects that either showcase or feature people of color in the stories,” Ramon said.

Hunt echoed Ramon’s concerns about the limiting nature of Hollywood executives. Most people in the position to make decisions are white men. The homogenized experiences of the executives limit the decisions being made about stories and development, Hunt said.

The report also focused on the financial benefit of diversity for studios and networks, which is often an overlooked component, Tran said.

A common belief in Hollywood is that films about and featuring minority characters are less financially lucrative, Ramon said. Ridley Scott, director of “Alien” and “Blade Runner,” leaned heavily on this defense after he faced controversy for casting white actors in his Middle East-set Biblical epic “Exodus: Gods and Kings.”

“I can’t mount a film (like Exodus) of this budget … and say that my lead actor is Mohammad so-and-so from such-and-such,” Scott said in an interview with Variety. “I’m just not going to get it financed. So the question doesn’t even come up.”

The report’s research shows films with more diversity make more money around the world, Ramon said. Most 2015 films had a nondiverse cast, but casts of films that earned the most money were almost one-third minority.

For example, the 2016 film “Hidden Figures” features three black, female protagonists and happens to be the highest-grossing best picture nominee of the 2017 Academy Awards in the domestic box office

While the report can’t exclusively attribute the film’s success to its diversity, the report shows the trend holds across genres throughout the years of the study’s installments.

“For a long time, Hollywood has just relied on the myth that they think that you can’t make a big profit off movies about people of color around the world,” Ramon said. “And what we’ve shown in our research is that that’s not true.”

The team attended the Hollywood Creative Forum on Feb. 21 to officially launch the report at the entertainment conference. It was hosted by the Walter Kaitz Foundation at the Beverly Hilton, an organization that advocates for diversity in cable television.

Before Hunt took the stage to present the report, the foundation’s executive director, David M. Porter Jr. introduced Hunt and the report.

Porter said Hunt had done some of the most groundbreaking research in the field of race in entertainment. The assertion was met with applause.

Hunt went over the facts of the report, which showed that in many ways, change hasn’t occurred since last year’s report. In some cases, progress had actually been reversed. For example, minority film directors had decreased from 12.9 percent to 10.1 percent. Some audience members groaned.

Hunt moderated a diversity panel during the conference titled “Why Images Matter” that focused on the issues of diversity discussed in the findings. He spoke along with figures from different parts of Hollywood, such as Lily Neumeyer, head of development at VH1, and Ben Lopez, executive director of the National Association of Latino Independent Producers.

“I don’t have the answer,” Neumeyer said during the panel discussion. “I was dismayed by your results and it’s not the first time that I’ve seen them, but it makes no sense … it’s the most diverse generation in the history of the United States. For them, different is normal.”

Despite representing the studio perspective, Neumeyer had little to say when asked to defend Hollywood. In her position at VH1, Neumeyer has been responsible for a slate of diverse programming, somewhat atypical of the industry. Neumeyer said VH1 programs diverse shows, including ones like “Basketball Wives: LA” and the “Love & Hip Hop” franchise, because that’s what the audience demands – in her case, representative television shows.

The panel took questions from the primarily minority-based audience. Many of the questions were delivered with anger and confusion. They featured a recurring theme: if making inclusive films is so lucrative, why does Hollywood continue to make white, male-dominated films?

But the panel did not include any white, male executives who could answer the question.

The Future of Hollywood

The 2017 report has already been covered by many news outlets.

Deadline characterized the report as “a gloomier picture than its own data supports.”

However, many other outlets received the report positively, underscoring coverage of this year’s Academy Awards. Variety wrote increased representation in Oscar nominations this year is undercut by the findings of the report. The Los Angeles Times referenced the report as supporting evidence of the #OscarsSoWhite movement.

Hunt and Ramon are preparing to meet with some of the companies that sponsor the report, such as The Walt Disney Company and Time Warner Inc., to individually go over findings.

“The question is how far up the chain the information goes,” Hunt said. “We typically meet with vice presidents … but they are not the final decision maker at the end of the day in terms of what the network programs.”

Next year is slated to be the final year of the report, envisioned as a five-year project.

Ramon hopes Hollywood will eventually reach proportional representation, especially because scientists predict racial minorities will make up the majority of the population within the next few decades.

However, Hollywood still has much further to go and it’s hard to predict how long it will take, Ramon said.

The goal is that the report really takes hold with key decision-makers in order to change the way the industry does business, Hunt said.

“If Hollywood is going to remain viable, it’s going to have to get more diverse,” Hunt said. “There’s no other answer because audiences are showing that they are demanding diverse programming.”