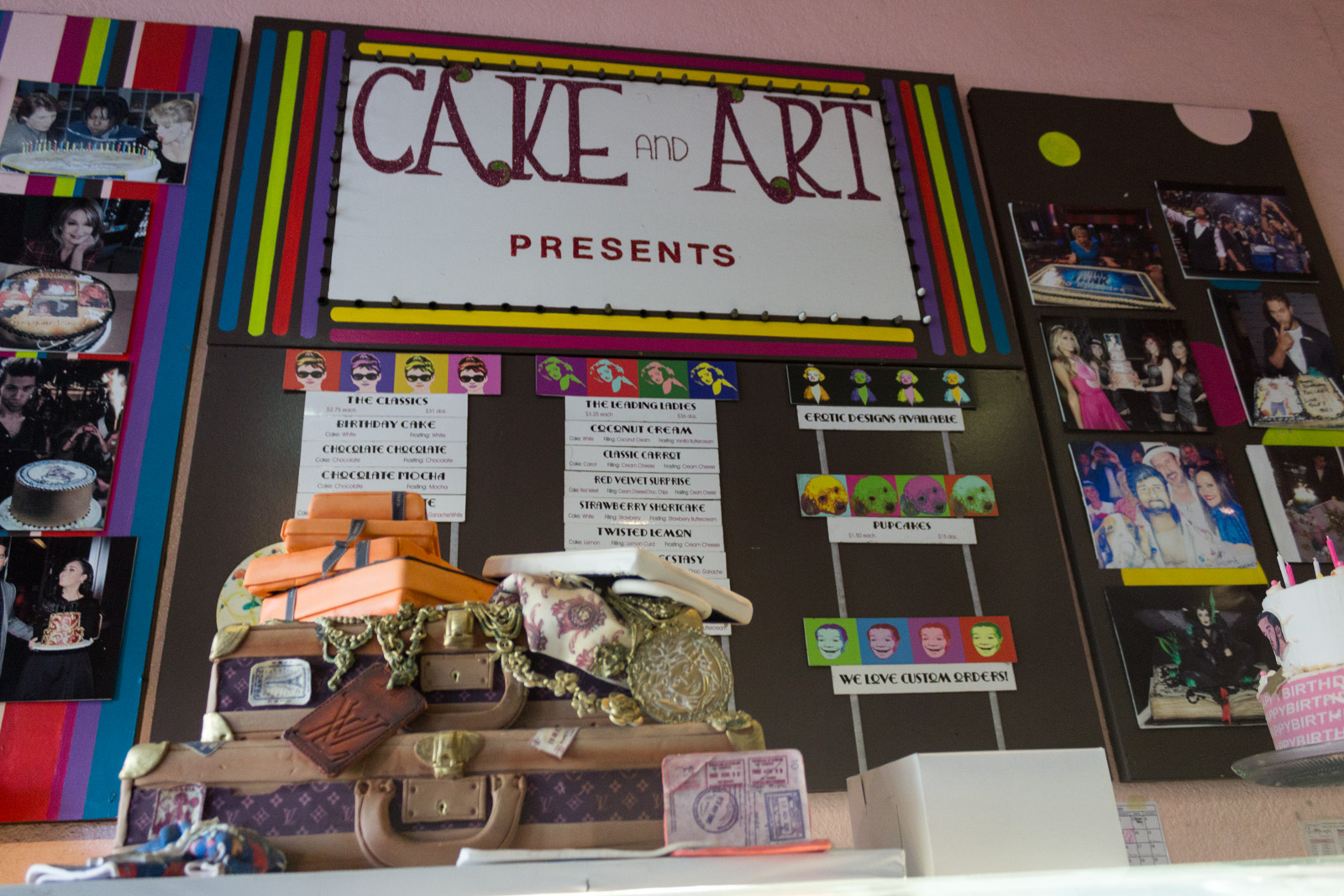 Cake and Art sells elaborate and expensive custom cake shapes that feature celebrities such as Angelina Jolie and characters like the Mad Hatter. It also sells a small selection of cupcakes for less expensive prices, but offers no seating at the shop. (Alyssa Dorn/Daily Bruin staff)

Finding a delicious restaurant in Los Angeles can be difficult amongst the city’s thousands of dining options. To help readers narrow down their search, the Daily Bruin will review restaurants located along main street boulevards near UCLA each week.

Angelina Jolie, complete with razor-sharp cheekbones and “Maleficent” horns, lounges next to a painstakingly intricate Iron Throne from “Game of Thrones.” Behind them, the Mad Hatter’s whimsical hat peers over a selection of “Star Wars” sheet cakes.

It’s not some crazy Hollywood-fueled dream, just the shop window for the custom cake bakery Cake and Art.

The inside of the shop exhibits a collection of giant photos of celebrities posing with extravagant novelty cakes made by the small bakery. One picture shows Rihanna posing next to a “Flintstones”-themed cake, while a neighboring shot shows Khloe Kardashian blowing out candles atop a $100 bill cake with her face on it.

Cake and Art makes it immediately clear that it caters to Hollywood and the stars.

For mere mortals who don’t want to drop anywhere from around $65 for a custom sheet cake to approximately $250 for a multitiered 3-D confection, the store also offers a selection of tastefully decorated cupcakes. However, the flavors are hit or miss, ranging from richly flavorful to downright disgusting.

The store itself is very small – selling cupcakes is clearly secondary to its main business in oversized, larger-than-life cakes. There’s nowhere inside to sit down and dig in – the closest set of tables is located at Chop Stop down the street.

The bakery displays a small selection of cupcakes but has more flavors stored in the kitchen, though it’s unclear how fresh they are, given the variety in quality. They clock in at $3.25 each, fairly expensive for the cupcakes’ small size.

The Keylime Cream Cheese was one of the best cupcakes. The inside of the cake was the freshest, avoiding the dry-and-crumbly trap that many cupcakes fall into. The frosting was a refreshing mixture of tart and sugary that balanced the overall sweetness of the cake. The crumble on top added a crunch, and the citrus cream in the middle served as a nice textural contrast, rare in a cupcake.

In comparison, the Vanilla Vanilla was an utter travesty.

The cute simplicity of the white frosting and rainbow sprinkles masked this crime against cupcakes. The frosting was hard, in a way that no frosting should be. It unintentionally had the same consistency as a year-old meringue forgotten behind a couch, and crumbled into flakes that fell to the ground like oddly large flecks of dandruff.

Instead of tasting like vanilla, the frosting evokes chalk and toothpaste, which does nothing to combat the dryness of the cake. Likely the vanilla confection was a stale version of the cupcake, but if that’s the case, it should not have been served. If customers are craving a vanilla cupcake, save the $3.25 and take it to the nearest Ralph’s – it’s likely a purchase there will taste better.

The Red Velvet Cream Cheese and Lemon Cream Cheese almost redeem Cake and Art, but it was nearly impossible to recover from such a terrible vanilla cupcake. Both cupcakes feature delicious frostings, but suffer from dry cake.

The cream cheese frosting of the red velvet was just sweet enough, and chocolate chips baked into the middle of the cupcake make for a pleasant surprise. The lemon frosting was light, both in texture and flavor, although the inside features an oddly gooey yet tasteless filling that nearly ruins the cupcake. Both cupcakes were smaller than the first two, making them nicely bite-sized.

Cake and Art is bizarre in its quality disparity, which makes it difficult to recommend. On the one hand, customers could find themselves enjoying an original flavor with some clever twists. On the other hand, they could bite into one of the worst cupcakes they’ve ever had.

Perhaps it’s best to recommend Cake and Art to thrill-seekers with extra cash on hand – it’s a pricey palate experiment with no guarantee of satisfaction.