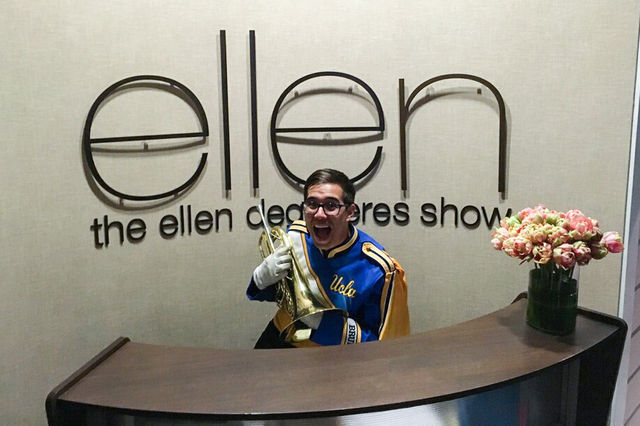 Patrick Chesnut played the French horn on “The Ellen DeGeneres Show” on Oct. 13 with other UCLA marching band members. (Courtesy of Brendan James)

UCLA marching band students are used to the spotlight; they frequently perform for thousands of fans at football games. But on Oct. 13, a few performers got a taste of a different kind of fame.

Comedian Ellen DeGeneres invited the UCLA marching band to perform on her show as part of “Mark Harmon Week,” a campaign for Harmon to appear as a guest for the first time in the show’s 14-season run. DeGeneres was inspired by this year’s Harris Poll, which recently named actor and former UCLA quarterback Mark Harmon as America’s favorite TV personality, bumping DeGeneres from the top spot she’d held for three years.

DeGeneres decorated a dressing room for the “NCIS” actor in hopes of convincing him to appear on the show. She hung posters from his movies, stocked the room with pizza and beer and invited a former co-star to wait inside for him. As the week went on, Harmon still hadn’t appeared, so DeGeneres tapped into his UCLA roots with the help of the marching band.

“Each day they were trying to do something more elaborate,” said Ken Fisher, assistant director of the marching band. “And so the day we were on, they said, ‘Oh, why don’t we just put the whole marching band inside his dressing room?’”

The band has appeared twice on the show previously. This time, producers called on Oct. 7 to book the band for the segment, giving them a little less than a week to find available band members.

On Oct. 12, the day before the segment aired, 14 students traveled to the Warner Bros. lot.

“The band has done a lot of this sort of thing, but ‘The Ellen Show’ is special,” Fisher said. “It’s really a fun kind of a family feel.”

The show’s staff prepared a dressing room area for the band, where they waited to be called to set, said Patrick Chesnut, a third-year political science student and French horn player.

Once the crew was ready, the band packed into Harmon’s empty dressing room and rehearsed the UCLA fight song “Sons of Westwood.”

The cameraman showed the students the motion of the shot, starting with a close-up of a UCLA football and pennant before panning to the band. The television director cued the band by tapping Zach Freeman, a third-year music performance student and one of the band’s drum majors, on the shoulder, signaling him to start the song.

They taped it in one take.

“When you’re in an individual, smaller setup, your sound is really important because you’ve only got one person to a part,” Freeman said. “All those parts need to be filled so that they can produce the entire song.”

Because the segment was pre-taped, the band didn’t know how it would be incorporated into the live show, Chesnut said.

During the episode’s “Mark Harmon Week” update, DeGeneres played the pre-taped performance on a screen behind her to laughs from the audience.

“I actually had no idea how they were going to frame all of it, and it was really cool to see the whole audience doing the eight-clap and clapping along with the fight song,” Chesnut said.

[Related: The Show Goes On: UCLA gymnast Sophina DeJesus shines as a performer]

Though the band members were excited to be on DeGeneres’ show, they knew their segment didn’t involve meeting her.

As they left to return to UCLA, the band members passed by the main studio, Chesnut said. The door was open and DeGeneres was playing pingpong inside. She put down her paddle and waved to the students, who were excited to catch a glimpse of the host before they ran away, Chesnut said.

“That was fun,” Freeman said. “I’m not particularly big on celebrities but it’s always exciting to meet someone who’s very influential.”

The day after the segment aired, Harmon finally made an appearance on the show, though the band members didn’t know if it was due to their participation. Regardless, the experience was rewarding, Freeman said.

“I was excited to go onto the Warner Brothers lot and film a little spot for TV – something I could show off to friends,” Freeman said. “But more importantly, something to show off the band. And that was the big thing for me.”