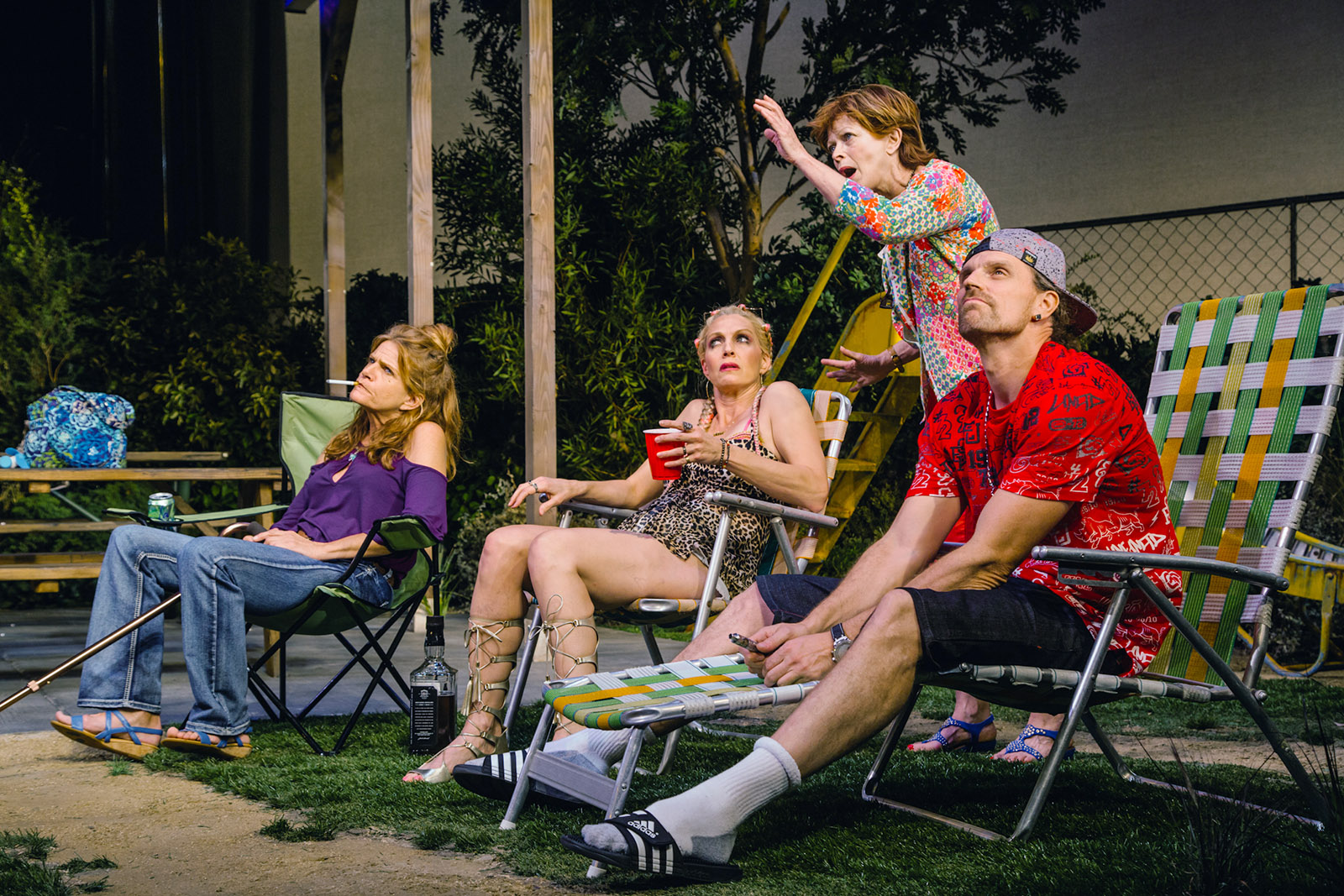 “Barbecue” skewers racial stereotypes, addiction and typical representations of the American family and sears them to their very core.

The delightfully crass comedy, showing at the Geffen Playhouse until Oct. 16, cleverly addresses false representations of the normal, politically correct American family portrayed in the media. The play oscillates between a black and a white family experiencing identical problems and breaks down racial stereotypes about the ways in which they deal with issues like drug addiction.

Playwright Robert O’Hara sets the bold tone for “Barbecue” right off the bat with his preshow instructions to the audience: “Turn off your goddamn phones, unwrap your goddamn candy and enjoy the goddamn show.”

The play opens in a public park, where the trailer trash O’Mallery family gathers for a family barbecue, which is soon revealed to be a staged intervention for their sister Barbara, who experiences alcohol and crack addiction. The family members dub her Zippity Boom.

Throughout the play, the setting remains almost entirely in the park, which consists of a slide, picnic table and forest of trees. Although simplistic, the continuity of setting helps to ingrain in the minds of viewers the reason for the family’s gathering – the intervention – and the dysfunctional, dragged-out way in which the family handles it.

The first scene begins with brother James T (Travis Johns), sitting on the park’s picnic table, speaking on his Bluetooth headset to another family member about the upcoming barbecue, while chugging a can of beer.

Although the audience can only hear one side of the conversation, the discussion is revolving around his “cracked out” sister Barbara (Rebecca Wisocky).

The lines add a light subversion to media portrayals of the typical American family that has family meetings and engages in calm, rational discussions. The humor lies in the fact that a normal family gathering does not revolve around sending the sister to rehab.

Rest of O’Mallery family enters the stage one by one. Lillie Anne (Yvette Cason, Frances Fisher), the self-chosen mediator for the intervention, acts as the voice of reason for the family. Marie (Elyse Mirto) approaches the scene holding a fifth of Jack Daniel’s, and Adlean (Dale Dickey) comes on chain-smoking cigarettes, which helps “sustain” her breast cancer.

The utter irony of the siblings’ drug use during an intervention for their sister helps to facilitate the humor of this dysfunctional family without undermining the severity of Zippity Boom’s addiction.

The second scene provides a shocking yet satisfying twist, where a seemingly instantaneous change of set reveals a black family, consisting of the same family members, dressed in the exact same outfits and exhibiting the exact same problems as the original white family. The siblings exhibit the same type of behavior – incessant insults, racist comments and constant complaints about addiction.

The identical costumes for both families deflect racial stereotypes in terms of outward appearance as well. Whether it was Marie’s skin-tight leopard print top and short-shorts or James T’s socks, sandals and backwards hat, the families’ similarities continued beyond their problems.

That each group of families remain on the same plane in regards to the situation with Barbara suggests a destabilization of racial stereotypes. All of the family members have their own personal issues with one another or with substance abuse – yet the family dynamics within both the black and white families remain the same.

The tone turns dismal in the second half, when the story flashes back one year. The focus is predominantly on two characters – white Barbara and black Barbara. Black Barbara (Cherise Boothe) is a movie star dressed in luxurious attire and sporting an accent that oscillates between British English and American English. She wants to create and star in a film that chronicles white Barbara’s life after her time in rehab, of which white Barbara supposedly documented in a memoir.

O’Hara’s decision to make the black family represent the white family’s struggles through film is ingenious.

Ultimately, both Barbaras discover they have battled severe drug addictions, which is the one commonality that leads them to collaborating on a film together. Their races are minimized when they discover their mutual problem, meaning that regardless of race, the same addiction issues can impact their lives and their families.