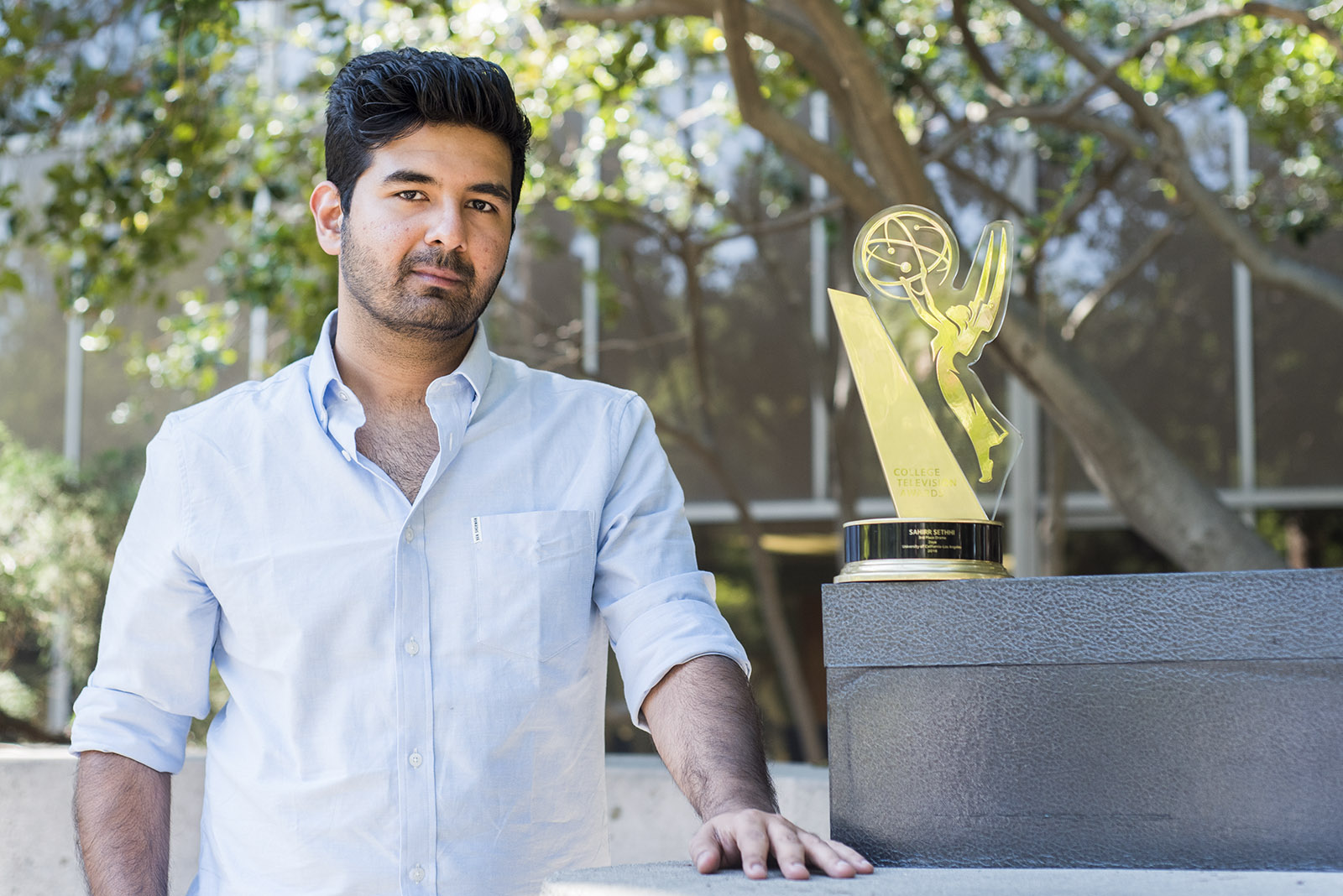 UCLA alumnus Sahirr Sethhi won a College Television Award – a student Emmy Award – for his thesis film “Zoya,” which was filmed in the forests of Kanha National Park in India. (Miriam Bribiesca/Photo editor)

Sahirr Sethhi and his film crew prepared for a scene in India’s Kanha National Park, utilizing the sunset’s tint on the green environment as the backdrop for a shot.

The group heard the alarm calls of deer echoing throughout the forest, indicating a nearby predator. On either side of the crew, bison pounded through the forest. The crew waited, frozen and silent, for 10 minutes until the danger passed, allowing the crew to get the shot and flee.

Sethhi, a UCLA Theater, Film and Television alumnus, experienced the encounter along with his crew while filming “Zoya,” a 27-minute short film.

Sethhi began the film’s proposal process for his post-thesis project in 2013, and “Zoya” had its world premiere at the Palm Springs International Shortfest on Sunday. In May, “Zoya” won third place in Drama for the 2016 College Television Awards, known as the student Emmy Awards. The film weaves in Sethhi’s interest in filmmaking and conservation, creating a narrative about a wildlife conservationist who searches for a missing tiger in the jungles of India while trying to reconnect with his estranged daughter.

“The beauty about making a film is that you start off with a vision and an idea, but while you’re making the film, you’re also making the vision as you go along,” Sethhi said.

Although Sethhi’s original academic interests were in computers and engineering, his passion for filmmaking emerged as he made news videos for his high school. He used his scientific background in the narrative drama of “Zoya,” he said.

Sethhi said his fascination with tigers and his desire to shoot in a forest habitat is how the idea for the film came about. He had been on several safaris in Kenya and India, sparking his interest in wildlife, he said.

Though Sethhi has some scientific background, he needed experts on wildlife and conservation to help incorporate specific details into the film. He learned tigers live in a 20 to 30 kilometer radius territory, meaning they have gone astray if they leave the area. This helped Sethhi write the script for how the zoologist would go about finding the tiger in the film.

The film received the Alfred P. Sloan Film Production Grant in 2014 – which helps fund students creating a film with a scientific basis – and the grant foundation put Sethhi in touch with Jessica Lynch Alfaro. The biological anthropologist and associate professor at the UCLA Institute for Society and Genetics worked as Sethhi’s mentor as he wrote the film’s script.

Alfaro helped Sethhi learn about the life of zoologists, their experiences in the jungles, their protocol for dealing with animals and what inspires them to study animals and wildlife, Sethhi said.

Sethhi said he believes what drew the film crew together was the relevant topic of conservation and the humanizing story about a zoologist who is looking for something missing in his life.

“The idea of conservation is a big concern globally, and that concept is something that rings true with everyone associated on the project,” said Shayar Bhansali, the film’s editor.

Sethhi and his crew contemplated a couple forests for their shooting location including Ranthambore National Park and Bandhavgarh Tiger Reserve. Eventually, they chose Kanha National Park, a forest and tiger reserve that allowed the crew and actors easy access and plenty of open area to shoot.

The crew needed a location that would let them go on foot into the jungle to get the shots they needed, Sethhi said. Kanha’s protected forest includes a three-mile stretch that allows people to walk around in an area separate from the safari itself, he said.

“When we entered Kanha, we just felt it was so green, so beautiful. It’s the most perfect habitat,” Sethhi said. “It would be a dream come true for any movie location.”

Lacking access to power, large batteries and ample lighting gear the crew found small and mobile equipment to shoot the film, Sethhi said. They hauled heavy loads of equipment on their backs for three miles to their desired shooting location.

“They don’t have the luxuries you would have on any other film set,” said Eeshit Narain, the film’s director of photography.

Sethhi is currently working on two feature films, which present subtextual parallels similar to those in “Zoya,” where the zoologist’s search for the tiger is a metaphor for the search of his estranged daughter, he said.

Sethhi credits his College Television Award to the mentorship and community he built at UCLA.