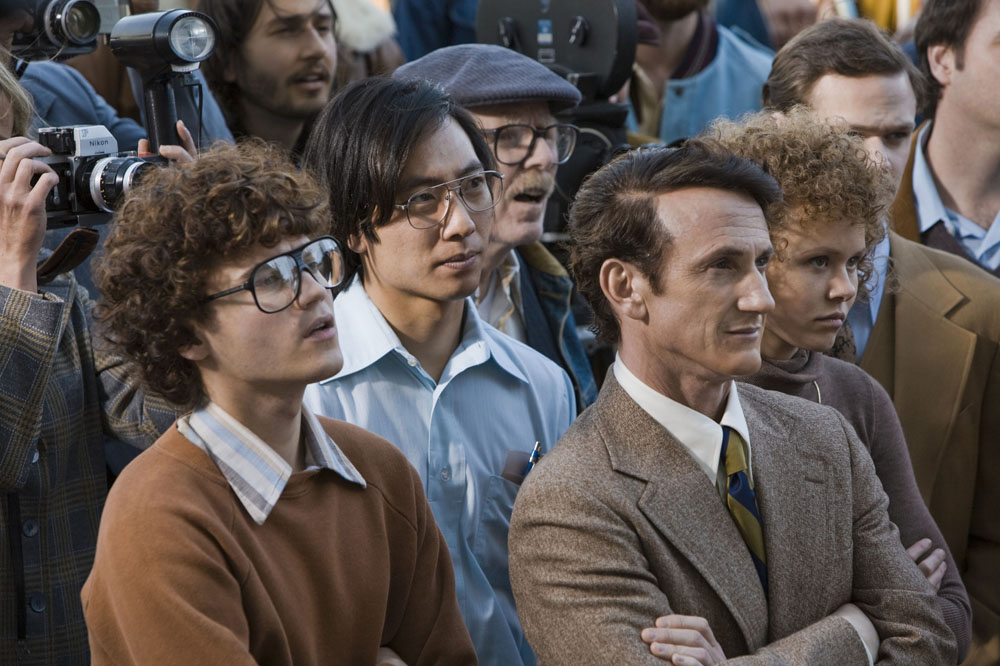 The 2008 film “Milk” takes place in the 1970s, as Harvey Milk finds himself at the center of gay politics in San Francisco. (Focus Features)

Flip on a news channel and you’re likely to see characters with perfectly coiffed hair making fantastical claims directly at the camera. But how far does this connection between political figures and entertainment go? Each week, A&E columnist Kevin Truong will look at a movie through the lens of modern politics, analyzing whether the political climate has changed or remained the same.

“Milk” is a movie that takes place in a different time and a seemingly different country, but is integral to understanding the way we think about lesbian, gay, bisexual and transgender rights today.

It opens in New York in 1970 and Harvey Milk, played by Sean Penn, is an insurance salesman on the eve of his 40th birthday. In a subway station a few minutes before midnight, he stumbles upon Scott Smith, a much younger man, whom he charms and takes home.

In the obligatory post-hookup pillow-talk scene, Milk opens up about his dissatisfaction with life. He hints at his ultimate dream to live out of the closet and free in the world.

A few years later, he and Smith, played by James Franco, move across the country to San Francisco. They settle in a neighborhood in Eureka Valley that’s in the midst of becoming the booming heart of the city’s gay community – the Castro.

Milk and Smith become community activists, organizing the Castro into a successful boycott of Coors beer for its conservative antilabor policies and funneling gay customers into businesses that support LGBT rights.

This effort earns Milk the moniker “Mayor of Castro Street” and gives him his first taste of the potential power of a unified and determined gay community.

Few social issues have swung so drastically, and in such a short time in the United States, as LGBT rights.

In issues regarding sexuality, public opinion has been speeding toward equality. A 2015 Gallup poll found that 68 percent of people in the United States believed that gay or lesbian relations should be legal as opposed to 28 percent of people who disagreed.

A big reason behind the change in opinion was the highly visible activist movement during 1970s, around the same time that Harvey Milk found himself at the center of gay politics in San Francisco.

Milk decides to initiate a series of unsuccessful runs for political office. While Smith starts out as his campaign manager and loyal supporter, the constant political grind strains their relationship.

In the midst of emotional turmoil, Milk gets his big political break when the district voting lines for the role of city supervisor are redrawn in order to create a more representative council.

Inspired by the regulation change and lifted by enthusiastic campaign operators, Milk creates a grassroots movement that launches him to city supervisor chair as the first openly gay person to be elected to public office in California.

In the film, Milk is faced with a dangerous legislative challenge. Proposition 6, introduced by state Assemblyman John Briggs, was a ballot initiative that would have banned gays and lesbians from employment in state public schools.

The idea that such discriminatory legislation could become law catalyzed gay rights activists and politicians to oppose the bill. A particularly striking scene from the movie sees Milk speaking to fellow organizers and friends, supporting the controversial practice of “outing” closeted figures as a part of the successful effort to defeat the bill.

When watching the movie, it’s easy to remove yourself from what feels like ancient history. It seems unthinkable that a referendum like Proposition 6 would even get to the ballot nowadays, but political actions outside the film mirrored the push by activists to oppose an unfair ballot initiative.

The proposition was eventually struck down and on June 26, the Supreme Court handed down a decision that made same-sex marriage legal across all 50 states.

In his landmark ruling in Obergefell v. Hodges, which swept across the country sparking celebrations, Justice Anthony Kennedy wrote:

“It would misunderstand these men and women to say they disrespect the idea of marriage. Their plea is that they do respect it, respect it so deeply that they seek to find its fulfillment for themselves. Their hope is not to be condemned to live in loneliness, excluded from one of civilization’s oldest institutions. They ask for equal dignity in the eyes of the law. The Constitution grants them that right.”

This decision was built on the struggle of scores of activists including Harvey Milk.

Tragedy bookends the movie, with the assassination of Milk and San Francisco Mayor George Moscone by disgruntled former supervisor Dan White. Thousands stream through San Francisco’s streets as part of a candlelight vigil and Milk passes into myth, a martyr for the cause of equality.