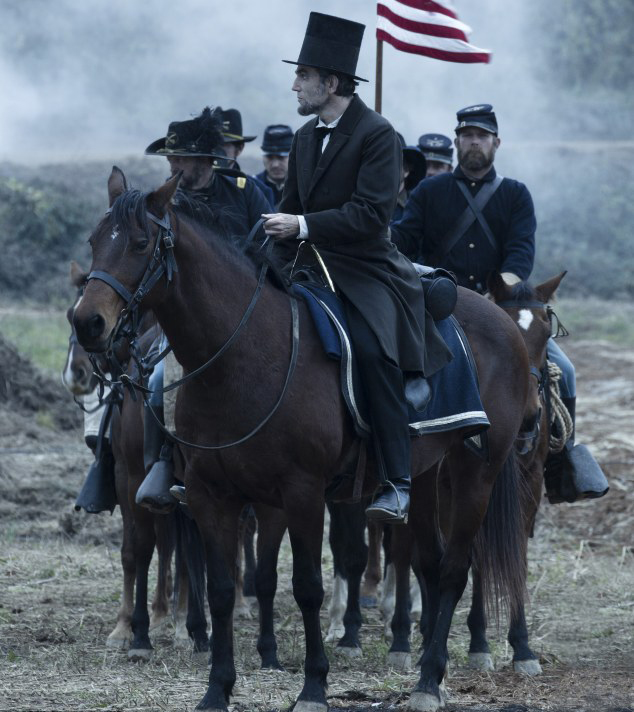 Flip on a news channel and you’re likely to see characters with perfectly coiffed hair making fantastical claims directly to camera. But how far does this connection between political figures and entertainment go? Each week, A&E columnist Kevin Truong will look at a movie through the lens of modern politics, analyzing whether the political climate has changed or remained the same.

The visual style of “Lincoln” is dark and washed out. Muted colors brush both the screen and the characters, mirroring the historical and emotional timeline of the film.

Method actor Daniel Day-Lewis plays the titular character in a chillingly accurate fashion. He captures not only Abraham Lincoln’s awkward gait and hunched posture, but also his ability to bring together a team of rivals for the ultimate end of a positive future – a lesson that today’s politicians would do well to learn.

The film, directed by Steven Spielberg, follows Lincoln from near the end of the Civil War, close to victory in a conflict he initiated to keep the United States of America whole. After four years of bloody battles, his cheeks hang haggard, his body worn, but he is prepared for the most difficult fight of his presidency: the struggle to end slavery.

It seems strange to think about it now, but at the time, there were fears that slavery would return when the country was welded back together. The storied Emancipation Proclamation only targeted the Southern states, which raised concerns that the 13th Amendment, officially outlawing slavery, would be defeated by the returning states as retribution for the war.

This campaign would not be won on the battlefield, however, but in the much-vilified congressional backrooms that hosted greasy-palmed deal-making, which is so often criticized for cheap political points.

In “Lincoln,” we see a political master at work. Attempting to secure both the continuation of a unified country and his legacy as a leader, the president tries everything he can to ensure the passage of the 13th Amendment. He even uses the idea of compromise which seems so foreign to politicians today.

Lincoln threatens adversaries with his 6-foot-4 frame, he bribes skeptical congressmen with cushy jobs and he uses long, drawn-out stories on mythology, history and biblical passages to both annoy and inspire.

The movie also delves into the dirtier side of politics and the deeds of our penny president. Lincoln cavorts with lobbyists and schemes to sideline abolitionist Thaddeus Stevens, one of his strongest and most vocal supporters, because of fears he may hurt the larger cause of reconciliation.

He also makes the brutal political calculation of extending the war and the amount of young men killed, in order to bide time to gain the votes he needs to ensure the bloodshed was not for naught.

During these parts of the movie, it’s easy to see him as the perfect politician who glad-hands and cajoles with the best of them. But some of the most poignant scenes punctuate these moments. Alone with his thoughts, Lincoln is tortured by the awful price of his decisions.

In private moments, his face flashes with anguish and pain – historians say he may have suffered from clinical depression – both personal and private.

His interactions with First Lady Mary Todd Lincoln, played with ferocious strength by Sally Field, lay him bare. He is stripped of the pomp and circumstance of the presidency, which is replaced with the reality of himself as a man who has lost a son along with half a country.

Looking at our politics today, it is possible to feel lost, desolate and cynical like Lincoln in his private study, in the face of a country that seems cornered into competing conservative and liberal ideologies.

But it is by following Lincoln and employing compromise and conciliation that we can bring this nation together again. It’s important to remember that Lincoln did not sway with the winds. In fact, it was his strong-principled stance on slavery that literally wrested the country in two.

However, that strong stance allowed him to make the deals and calculations to compromise and bring the country together again. He epitomizes the image of a government “of the people, by the people, for the people.”

Director Steven Spielberg is one of the most successful filmmakers of his generation and while he has been criticized for it, his movies are permeated by the hope that even though progress is arduously difficult, it can be possible.

And if we take that lesson to heart – just as Secretary of War Edwin Stanton declares by Lincoln’s deathbed – “Now he belongs to the ages.”