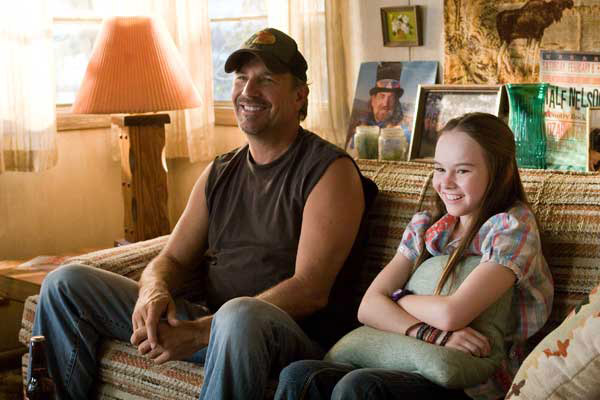 Flip on a news channel and you’re likely to see characters with perfectly coiffed hair making fantastical claims directly to camera. But how far does this connection between political figures and entertainment go? Each week A&E columnist Kevin Truong will look at a movie through the lens of modern politics, analyzing whether the political climate has changed or remained the same.

Let me start out by saying “Swing Vote” is a bad movie.

The film is overly sentimental to the point of bordering on schmaltz, the acting is in the sweet spot of either overacting or uncommitted and the central plot conceit is needlessly complicated and just plain unrealistic.

Okay, it’s not all horrible. Costner actually pulls together a good performance and the girl, Madeline Carroll, who plays his daughter Molly, is adorable and charismatic.

Costner plays a blue-collar middle-aged father named Bud Johnson who lives in Texico, New Mexico. Unconcerned with politics and seemingly okay with letting Molly take care of things around the house, Bud fits the mold of the loveable loser, down to the unkempt stubble and the tattered baseball cap.

Molly plans to use the upcoming presidential election as a method to kick Bud out of his political apathy. So she sneaks into a polling booth on Election Day and casts a vote for her father (hello, voter ID laws). In a ridiculous turn of events, the voting machine malfunctions, logging a vote that doesn’t indicate the candidate it is for.

Lo and behold, the popular vote is exactly tied between the Republican incumbent and the Democratic challenger. And Bud, by extension New Mexico’s electoral votes, gets caught up in the most important political contest in the world.

The two candidates start fighting over Bud’s vote in typical political fashion, changing their positions to fit with his whims. This is until his good heart turns them away from cynical backhanded techniques and toward a genuine debate about what matters to Americans.

Then, because cliches don’t exist in the world of “Swing Vote,” the movie ends on a cliffhanger of Bud casting a vote for an unknown candidate.

What is interesting to the more politically minded is the characterization of Bud as the average American, a blue-collar white middle-aged male.

“Swing Vote” was released in 2008, in the depths of the Great Recession. At the time, the picture of the American worker was a downtrodden, laid-off laborer from the Rust Belt who looked a lot like Bud.

The two presidential candidates in the film are also both middle-aged white men, historically par for the course in our choices for the country’s commander in chief.

To be sure, America still has a large white majority population. But as demographic shifts start to take effect, so too does the picture of an average American.

According to the U.S. Census Bureau, 2014 is the year in which the United States shifted to being a majority-minority nation for those under five years old.

The data showed that in that year, 50.2 percent of the 20 million children under 5 years old living in the U.S. were minorities.

Politically, the realities of these movements in the nature of what it means to be an American have already started to pop up in this year’s presidential contests.

Looking at the slate of Republican presidential hopefuls like Ben Carson, Marco Rubio and Bobby Jindal is a vision toward a more inclusive and representative country. Less so on the part of the Democrats, but their candidates are increasingly talking about issues that directly affect minority communities and people of color.

Maybe in the 2020s reboot of “Swing Vote,” its version of an average American and the two candidates attempting to woo him will change with the times. For now, I’ll just be happy with a better film.

What do you think of the film “Swing Vote”? Email Truong at [email protected]