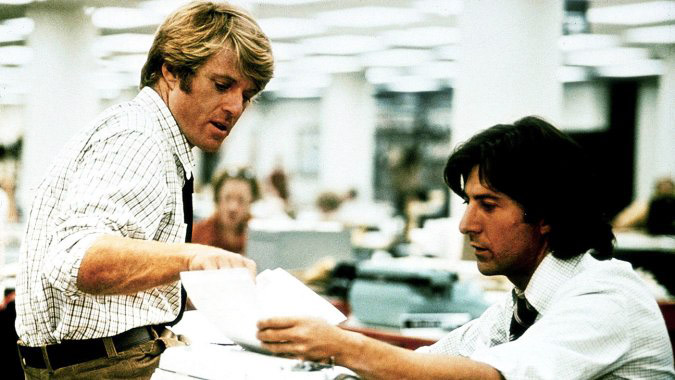 Since the 1976 film “All the President’s Men,” the media landscape has changed in the intervening years between Watergate and the 2016 presidential election due to the ubiquity of information easily accessed through the Internet. (Courtesy of Warner Bros.)

Flip on a news channel and you’re likely to see characters with perfectly coiffed hair making fantastical claims directly to camera. But how far does this connection between political figures and entertainment go? Each week A&E columnist Kevin Truong will look at a movie through the lens of modern politics, analyzing whether the political climate has changed or remained the same.

“All the President’s Men” launched a thousand bylines.

The movie is probably the best example of a film that combined the intense in-the-weeds aspects of investigative reporting and the seedy secrecy of the Washington beltway, dashed with the noble public service mission of journalism.

Let’s be honest, having the two leads played by ’70s heartthrobs, Robert Redford and Dustin Hoffman, didn’t hurt either.

Based off the book of the same name by legendary journalists Carl Bernstein and Bob Woodward, the movie details the pair’s investigation into the Watergate scandal. It was a story ripe for adaptation; it features two intrepid young heroes, a cover-up that goes all the way to the president and an informant hilariously named “Deep Throat,” what else could you possibly want?

For those not familiar with the facts of the scandal other than the “gate” suffix, here they are.

In1972, five men were arrested for burglarizing the headquarters of the Democratic National Committee in the Watergate Hotel in Washington, D.C. Bob Woodward, a metro reporter at The Washington Post was given the assignment to look into the break-in. After raising his suspicion that a bigger story was afoot to higher-ups at the newspaper, he was partnered up with Carl Bernstein to investigate.

Through old-fashioned reporting and plenty of rolodex use, the pair was able to link the burglars to officials within the Nixon administration. More digging by the duo revealed that CREEP – not making this up – the Committee to Re-elect the President had been diverting funds to the White House chief of staff in order to pay for an extensive sabotage campaign of Democratic candidates.

Eventually, after it emerged that the president knew about the break-in and tried to cover it up, President Nixon became the only president to resign.

Woodward and Bernstein’s investigation of the break-in and subsequent cover-up ranks as one of the most impressive reporting efforts in history and has been held up as a relic of a bygone era.

Old-timers nowadays say that political journalism has since devolved into a farce covering of the day-to-day campaign horse race, where scandal and big personalities are clipped and shaped into digestible soundbites.

The media landscape has changed in the intervening years between Watergate and this year’s march to 2016’s presidential election due mainly to two factors.

One is the 24-hour political cable news station which seems to exist to reinforce and drive partisan ideology among its viewers.

The second major force is the Internet. It has been the major disruptor in the media over the past 20 years, allowing for immediate reaction to any gaff, statement or 500-page policy.

The question is whether these factors have kicked political journalism from the lofty perch it sat on during the golden age of newspapers.

The answer, quite simply, is no.

While it’s easy to look at the ’60s and ’70s with rose-tinted shades, it’s hard to argue against the idea that journalists have always been infallible, petty and hungrily competitive.

“All the President’s Men,” depicts the missteps made in search of a great scoop. The two reporters are shown running with a story, only to have their credibility attacked when their prediction didn’t come through as expected.

It was only through the confidence and encouragement of Ben Bradlee, the third hero in the film, the late former executive editor of The Washington Post, that they eventually were able to write the stories that took down the president.

While the opinion leaders have shifted and broadened their audience; the conservative National Review swapped out for Fox News and liberal New Republic for MSNBC; the idea of media organizations driving partisan agendas has been with us for decades.

But what about a parallel for the Internet outrage machine, where anger and accusation overwhelm nuance?

“Nixon himself stated this law of journalism back in the fifties, when he saw himself as a victim of attacks from the left. ‘A charge is usually put on the front page; the defense is buried among the deodorant ads,’ he said,” Crouse wrote.