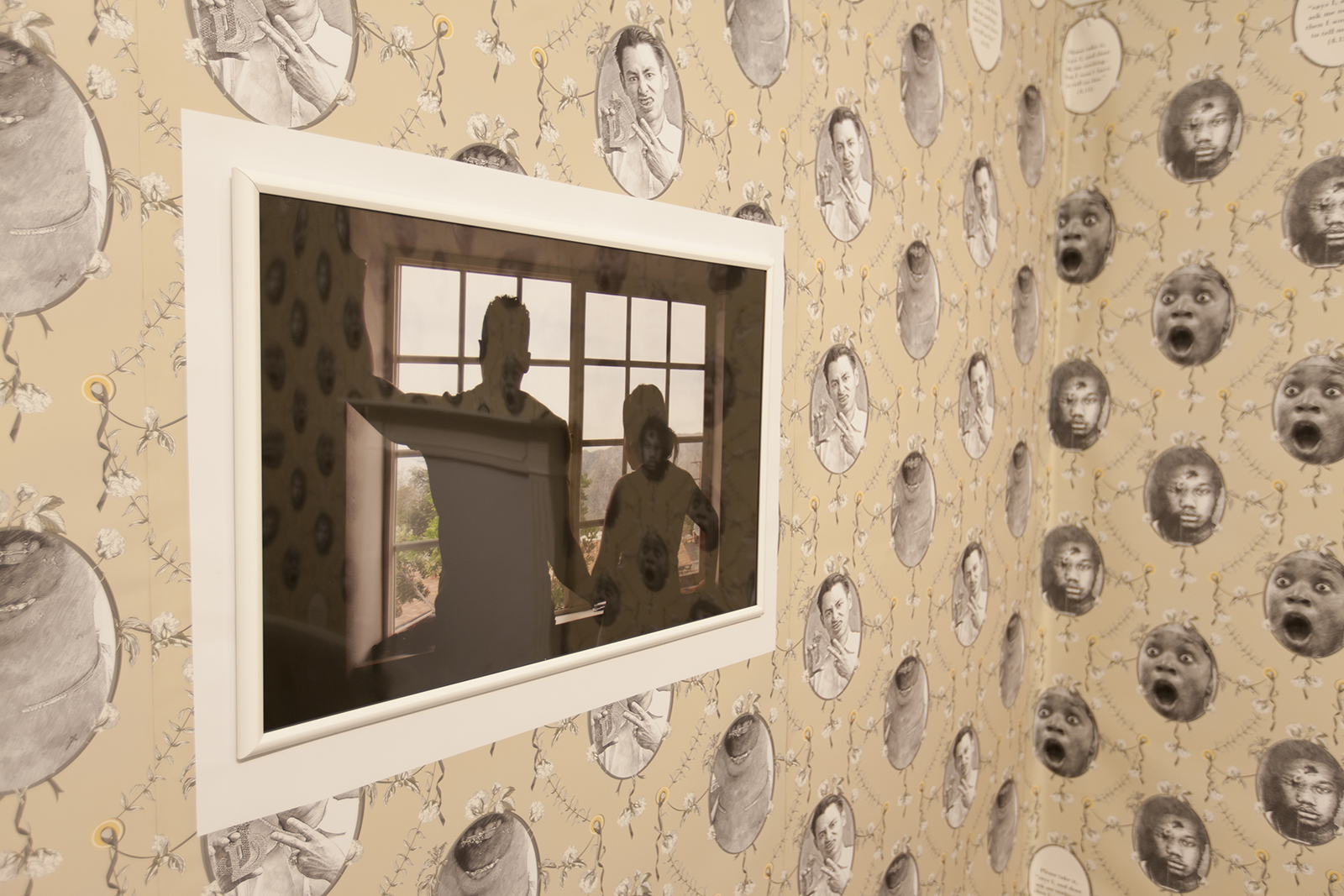 The perception of a quaint, traditional dining room in Carla Jay Harris’ thesis exhibition is shattered by a closer look at the floral wallpaper that lines the walls.

The wallpaper showcases a bold image of two black males dressed up as gang members for a role in a movie, while another titled “College Gangsta Party” is of several white men in bandanas and white tanks holding paper-bagged bottles of liquor.

Harris, a graduate photography student, said she seeks to juxtapose images in her work to either tell a story or to question one.

“With these images I feel like I’m questioning a running narrative about African American culture that you see in more typical media,” Harris said. “I want to point out that everyone puts on a role, and this role doesn’t necessarily belong to one group or another, questioning the assumption that one (group) owns the gangster image and one doesn’t.”

Harris’ thesis show, “INCONSPICUOUS PRESENCE,” opened Thursday and will run through May 8 in the New Wight Gallery in Broad Art Center.

UCLA history professor Brenda Stevenson, who is also Harris’ aunt, said she was particularly struck by the picture of a black man being used for target practice on the wallpaper that Harris created.

“It just reminds you of how racism is transmitted through one’s family,” Stevenson said. “I deal a great deal with our past, specifically the ways which African Americans have survived, and I felt an immediate connection.”

While Harris said elements of racial representations in the media are present in her work, she is focused on representation in a broader sense.

“I’m more concerned with the photographic medium and its ability to capture a person in a moment – that instant you take the picture, it’s actually happening, but it’s not true in a larger sense,” Harris said.

The photographs on the wallpaper alternate with a quote from “The Adventures of Huckleberry Finn” that reads, “‘Please take it,’ says I, ‘and don’t ask me nothing – then I won’t have to tell no lies.'”

Images from the dollar bill and this quote serve as the foundation of the project, Harris said.

“I feel like a lot of times people are portrayed not necessarily to portray an accurate representation of something but to sell something,” Harris said. “That ‘Huckleberry Finn’ quote is connotational in that it’s something that everyone studies when they’re younger, and I think it’s a big part of the way we are taught to see people.”

The interior of the space features a dining table lined with a cotton plant arrangement and plates that present similar images to those on the wallpaper alongside a dresser with a photo of Harris as a child.

Harris said she drew inspiration for the setup of the installation from her family’s home in Virginia, which she spent time in over the summer.

“It’s the place my parents and my grandparents were raised,” Harris said. “My father was in the military, and I grew up moving around quite a bit, so it’s the closest place I have to home.”

In the opposing room are six different self-portraits of Harris including family portraits and photos taken in her familial home, which Harris said she feels provide context to the wallpaper in her own mind.

“Photography is often closely tied to reality, and I find that limiting,” Harris said. “I like the idea of sort of creating these weird psychological spaces in that they exist in the gallery but are completely just pulled out my imagination.”

Harris’ sister and television writer Erica Mountain, who Harris has collaborated with on a short film, said Harris’ experience with entertainment and art brings about a level of professionalism in her display.

“She brings stereotypes and predisposed ideas and ideologies into her work,” Mountain said. “I find a lot of art feels very broad and nebulous in a lot of ways, but with (Harris), it has a touch of what’s current in the world and makes viewers question their own views.”

Harris said she hopes visitors to the exhibit leave questioning the images they see in her project and in the world.

“I feel like it’s a process of discovery, asking questions and exploring answers,” Harris said. “I don’t feel like I’m really trying to dictate an ideology to the audience – it’s just sort of about us exploring this issue and asking these questions together.”