Hox Zodiac dinner to discuss similarities between humans and animals 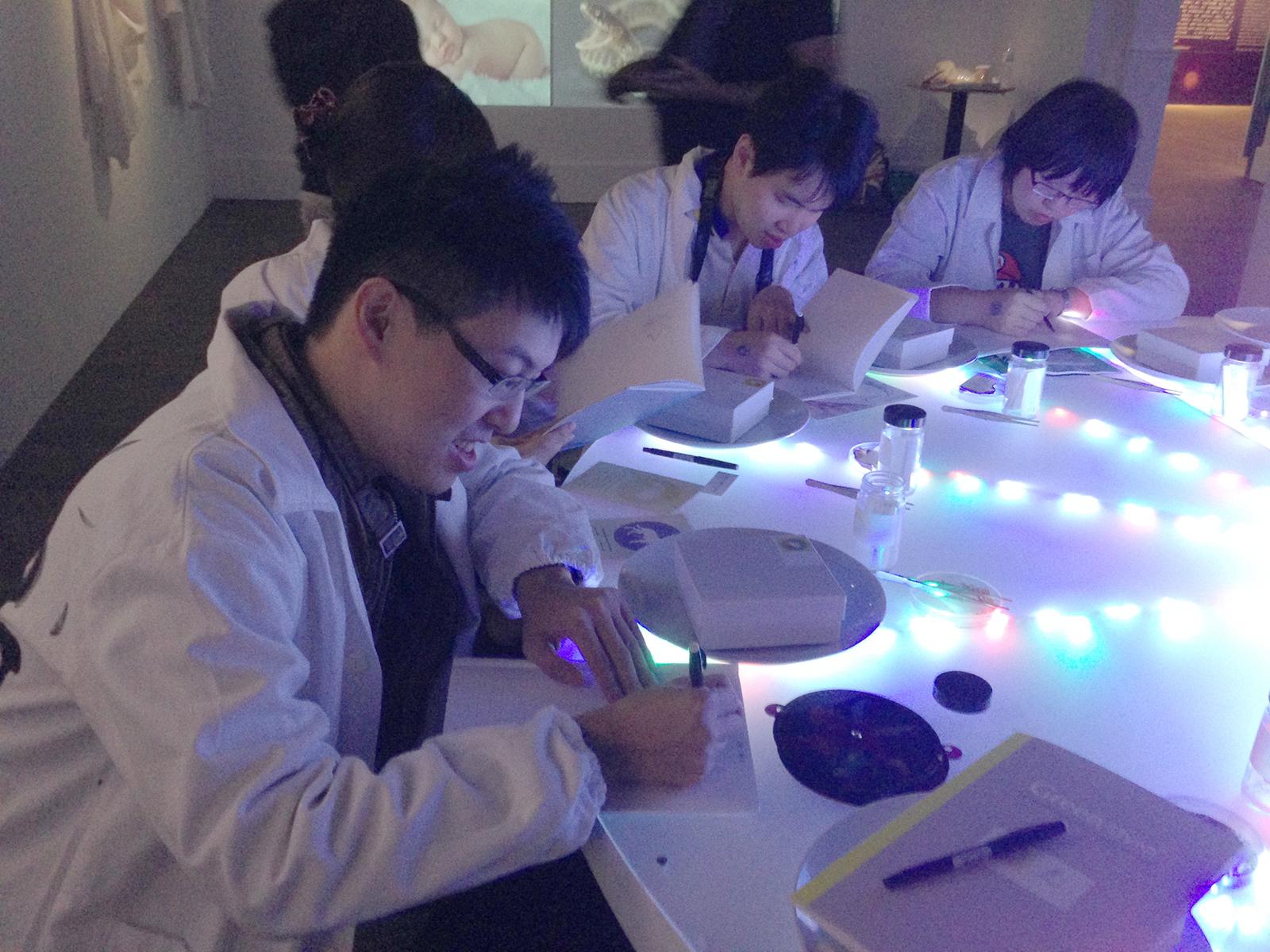 The UCLA Art | Sci Center will host its first Hox Zodiac dinner Thursday night at the California NanoSystems Institute. The event aims to facilitate discussion between artists and scientists by featuring a 12-person dinner table in which attendants are organized in accordance with their zodiac sign.
(Courtesy of Victoria Vesna)

Twelve figures will sit around a dinner table and play a game of chance. As the cards are played, the genetic game proceeds to inform each player about his or her connection to each other and the animals around them.

On Thursday, the Art | Sci Center’s gallery will host the very first Hox Zodiac dinner. Serving as both a communal dinner and an interactive exhibition, the event works to facilitate discourse and dialogue about issues related to the body, animals, food and genetics for scientists and artists alike.

Created in collaboration between neuroscientist Siddarth Ramakrishnan and artist and professor in the department of Design | Media Arts at UCLA Victoria Vesna, the Hox Zodiac dinner features a 12-person dining table that acts as the focal point of the exhibition. By inviting audience members to sit in accordance to his or her Chinese zodiac sign, the dinner allows participants to simultaneously eat and contribute to the exhibition through expressing their thoughts in discussion, drawing and writing.

“I told her about these genes called the Hox genes,” Ramakrishnan said. “They are the same set of genes that are in all of us that control what makes your head, what makes your feet or what makes your arms or wings. I found it fascinating that there was so much commonality between all the animals. When we look around us, we only see variations.”

After learning about the Hox gene, Vesna said she and Ramakrishnan began to collaborate on their first exhibition while they both taught in New York City at different universities. Even though the current Hox Zodiac exhibition surrounds a dinner, the first exhibition installed in Shanghai actually featured a projection upon a wall.

“At that point the Hox Zodiac project was more a motion capture,” Ramakrishnan said. “The audience member would walk in front of a screen and their shadow would be morphed into different animal limbs. So your shadow might have the limb of an elephant or the limb of a horse.”

While this first exhibition was playful, Vesna said that it was limiting because it did not allow a deeper meaning to come across. As a result, the exhibition evolved as it traveled.

“We really want people to be aware of genes common to all animals and that in some labs we can easily mutate some of these genes and create flies with legs on their head and mice with ears on their backs” Ramakrishnan said. “So its not uncommon for mutant animals to be created.”

After conducting the event in Shanghai, Ramakrishnan said the exhibition continued to develop during installations in the City University of Hong Kong’s School of Creative Media and the Taipei Museum of Contemporary Art. As a result of these exhibits, the premier Hox Zodiac dinner at UCLA will have 12 guests and display Eastern medicinal herbs, prescribed on the basis of the zodiac sign, in petri dishes.

At the event, Vesna said the audience can either observe or take part in the exhibition, which will feature two rounds for participants to sit at the table. If an audience member chooses to partake, he or she will be divided according to zodiac sign and given a lab coat with a Chinese zodiac symbol on the back.

“A lot of it is metaphorical and meant to create discourse,” Vesna said. “The food is very much about encouraging that and having people in a space where it’s relaxing. We offer participants at the table the same kinds of food as is laid out for the reception and for the audience watching.”

While eating at the dinner table, Ramakrishnan said participants will play a game inspired by I Ching, or the Book of Changes, meant to reflect the genetic game of chance. For example, if an I Ching card is played by a representative of the rat, he or she can be mutated and take on parts of the body of a snake. Those representing the rat and the snake will then exchange food.

“It is designed to rethink our relationship to animals by using animals we already identify ourselves with and also to think about the Chinese culture that is influencing us so much at this point, ” Vesna said.

Mick Lorusso, coordinator for the Art | Sci Gallery, said that in addition to generating discussion about our relationship to animals both in a laboratory and the natural environment, the Hox Zodiac dinner also allows a space for Eastern knowledge systems, like the Chinese zodiac belief system, to gain precedence in a Western context.

“We can take something maybe seen as myth or a belief system (and) not necessarily considered a channel for investigation in the sciences and introduce it in a building that has cutting edge science research,” Lorusso said. “The Chinese zodiac is a belief system just like science in the Western world is a belief system.”

While eating dinner and discussing what topics arise from the I Ching game, audience members will also record their experiences in a notebook and draw pictures of the mutant animals metaphorically created through the game, Ramakrishnan said.

“Whatever is left behind becomes a piece about the discourse that happened,” Vesna said. “It furthers the piece so that each time (the exhibition) takes on a different form depending on the audience’s direction.”

By combining art and science, Lorusso said the resulting interdisciplinary collaboration has the potential to form relationships and strengthen fields that are sometimes disassociated.

“Scientists need to have access to creativity and artists need to be educated and knowledgeable about the science that pretty much rules our world,” Vesna said. “Creating these kinds of performative art projects engages the audience where they actually start understanding the connection through direct experience.”