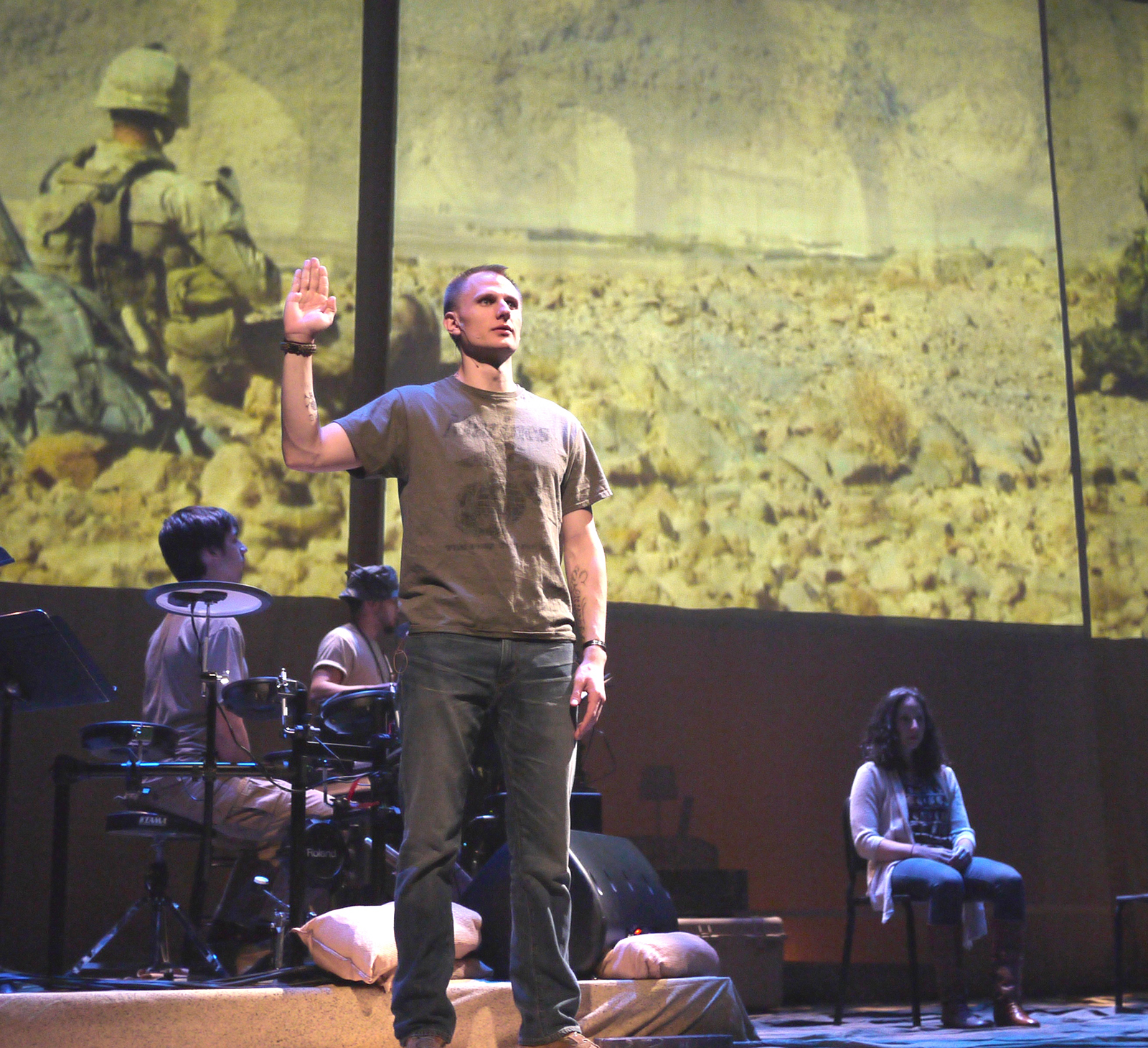 A single violin plays as an array of grandiose music builds alongside a montage of videos and images. In the foreground of this digital collage stands a man, upright and strong. It is his narration that will bring life to a series of images, videos and voices that arise from the Afghanistan War.

TheMarine AJ commands the center of the stage as he narrates his story from start to finish in what initially appears to be a one-man show.Yet, early on, AJ’s narrative is ruptured by additional voices and music arising to accompany the succession of videos being displayed behind him. VariousMarines, sitting onabaseandtalking to an unseen camera, strengthen AJ’s revelations, experiences and decisions, by narrating their own. Through “Basetrack Live,” the other Marines intermediately remind the audience that AJ is not alone at war.

In addition to reflectingon the collective journey of AJ and his fellowMarinesin Afghanistan, “Basetrack Live” also divides AJ’s narrative alongside his partner, Melissa, who is left at home to deal with her own personal battles while AJ isaway at war in Afghanistan. The way in which Melissa’s story is presented to the audience displays not only how technology can bridge divides, but also how equally important Melissa’s journey is in relation to AJ’s.

Melissa shares the stage with AJ, but in an unconventional manner. She first appears behind the haze of a curtain, sitting at a desk talking through her computer, while a projector displays Melissa’s face at the upper right-hand corner of the screen behind AJ. She is at once physically there – literally feet away from AJ – but figuratively distant except for the pixelated image AJ and the audience know her best by.

In contrast to Melissa and AJ, allof the other characters in “Basetrack Live” are not physically present, but are seen through the intermittent video footage and images displayed on the screen behind AJ. Sometimes they appear with dialogue while other times, there is only an image. What makes these montages provoke a larger emotional effect is the music that is created from the musicians present on stageduring“Basetrack Live.”

As a whole, “Basetrack Live” managed not only to inspire sympathy forMarines and their loved ones, but also theAfghan people who live alongside them. What results is a working collaboration of media that gives a face to the faceless–Marines, civilians and loved ones alike.

The lyrical score of “Basetrack Live,” from classical to rap, manages to capture the dichotomy between serenity and chaos. It is this music that heightens the contrast between the moon that AJ continually finds solace in during his nights in Afghanistan and subsequent military shootouts. The musicgives the audience the liberty to gracefully divide itsattention fromAJ, his voice and physical presence on stage, and the overlapping digital phantasmagoria of wartime images on the screen above.

The representations of the inhabitants of Afghanistan, in relation to the Marines who they live alongside, presents a subtleness in “Basetrack Live.” While the performance took the image of theMarine and his gun and repetitively presented it to the audience with and without the face of the Marine, the faces ofthe Afghan peoples,although unaccompanied byvoices, were never hidden. One particularly memorable image shows the face of an Afghangirl looking directly at the camera, her fists up in self-defense. As other images arise on the screen, her face fades until only her dark eyes remain.

“Basetrack Live” tells a personal tale that is remarkable not because it is novel or particularly heroic, but because it is a sharedone. By bringing togethertwoapparently contrasting mediums of communication – art and technology – it proves that a constructive dialogue can be reached in collaboration between them. This is a collaboration that has the ability to emancipate the esoteric experience of fighting in Afghanistan from the memories of those whose scars may never truly be gone, but, in the ability to share, can still fade over time.