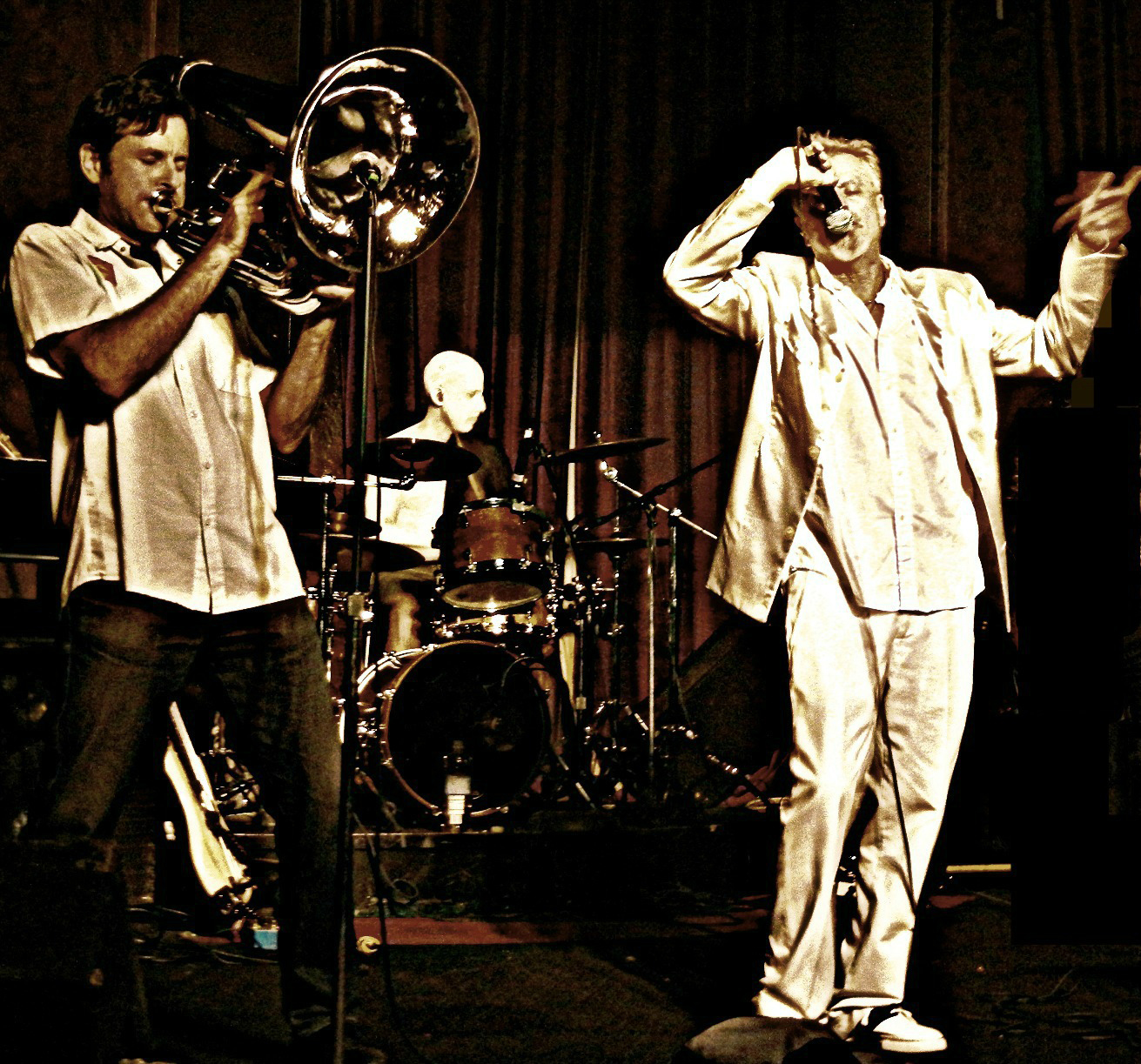 Professor Paul Abramson sings on stage with his band “Crying 4 Kafka” in his punk rock musical “The Saint of F’ed Up Karma,” which explores a sexual abuse case.

More than a decade ago, UCLA professor Paul Abramson became involved as an expert witness in a sexual abuse case so influential to him that he wrote a musical about it.

“The Saint of F’ed Up Karma” is an autobiographical punk rock musical written by and starring psychology professor Paul Abramson. Based on a real civil lawsuit, it explores a case involving a police officer who gets caught sexually molesting a 13-year-old boy. It features songs composed by Nine Inch Nails’ guitarist Robin Finck. On Nov. 1, the musical will be performed live at On The Rox above the Roxy Theatre in Los Angeles.

Told entirely through monologues, the story unfolds through the experiences of the protagonist Frank, played by Abramson, who is also the primary singer. The story has three arcs, which include the case and its aftermath, Frank’s involvement in the case and lastly, his romantic relationship.

Frank acquaints audiences with the life of a 13-year-old boy, Porter. They learn about his mother, who is a prostitute and wishes to escape a life of substance abuse and thus openly befriends a charismatic police officer. The story from there follows more misfortune, as the officer ultimately sexually abuses Porter.

“The case happened around 15 to 20 years ago. I worked for a number of years in sexual rights cases, but essentially everything about this one was messed up,” Abramson said. “It was deeply troubling in every way possible.”

Although immensely impacted by the case at the time, Abramson only began collaborating with Finck late last year to create music for the show. Abramson wrote all of the lyrics, while Finck composed the music.

Abramson’s band Crying 4 Kafka, which he is the lead singer of, plays live punk rock music onstage and accompanies the two main characters throughout the performance.

“I don’t think there’s any better music to represent the emotion of these types of situations that occur in this show,” said Ian Putnam, Crying 4 Kafka’s lead guitarist. “Punk rock in its intensity, drive, volume and lyrics is the variety of the emotions that go on in these storylines whether that’s revelation, love, sadness or rage. Punk rock encapsulates it all well.”

Punk rock was a vehicle to talk about the emotion he dealt with during these cases, Abramson said.

“I write about these cases and stories in a technical way,” he said. “Music is just another medium for presenting ideas.”

Growing up in a home where domestic violence was prevalent, Abramson said the play in some ways also parallels the emotional disturbances he dealt with as a child.

“The material is extremely important because it’s something that many people can and will relate to. It essentially continues to raise awareness about a topic that doesn’t go away in society,” Putnam said. “(Sexual abuse) goes on around in varying degrees and this particular story weaves together some very extreme examples of that.”

Lalé Welsh, an executive producer of Vérité TV who is currently creating a documentary on Abramson’s work, said it was this advocacy that attracted her to feature Abramson.

Welsh, who first came across the musical during the performance in Santa Barbara, said Abramson not only examines a problem in society but also comes up with a solution in this play.

“He makes it clear that kids need to tell people what’s happening to them, that tattletaling is the kryptonite,” Welsh said. “It’s simple but an amazing solution.”

A documentary about “The Saint of F’ed Up Karma” will be part of a web series premiering next fall in a contest hosted by the company.

“His work in his punk rock band and the advocacy of stopping child abuse through this musical is not only a very unique but also effective way to raise awareness,” Welsh said. “It’s the totality of the experience of a punk rock musical and hearing a compelling true story that makes it worth repeating as filmmakers.”

Despite garnering attention from filmmakers and booking new performances, the production is constantly going through changes, Abramson said. Essentially, a very minimal production with a cast of four to six people, the play has transformed greatly since its inception in August.

“I started writing it in 2012, and we started performing in May 2013. Like any writing project, it has gone through many renditions,” Abramson said. “It’s still a work in progress, but it’s only been getting better and better.”

As a psychology professor at UCLA, Abramson recently spoke about the civil litigation as well as psychological consequences of the case during a lecture on campus that was open to the public.

While the production has gone to bars, clubs and other venues in the past year, Abramson said he hopes to bring it to UCLA by next quarter, where he can discuss it with students in his sexual law class.

“I want to change the kind of prevailing zeitgeist that exists about protecting kids from sexual abuse,” Abramson said. “There is definitely a public service component to this play and I hope, in that way, this play gets people’s attention.”