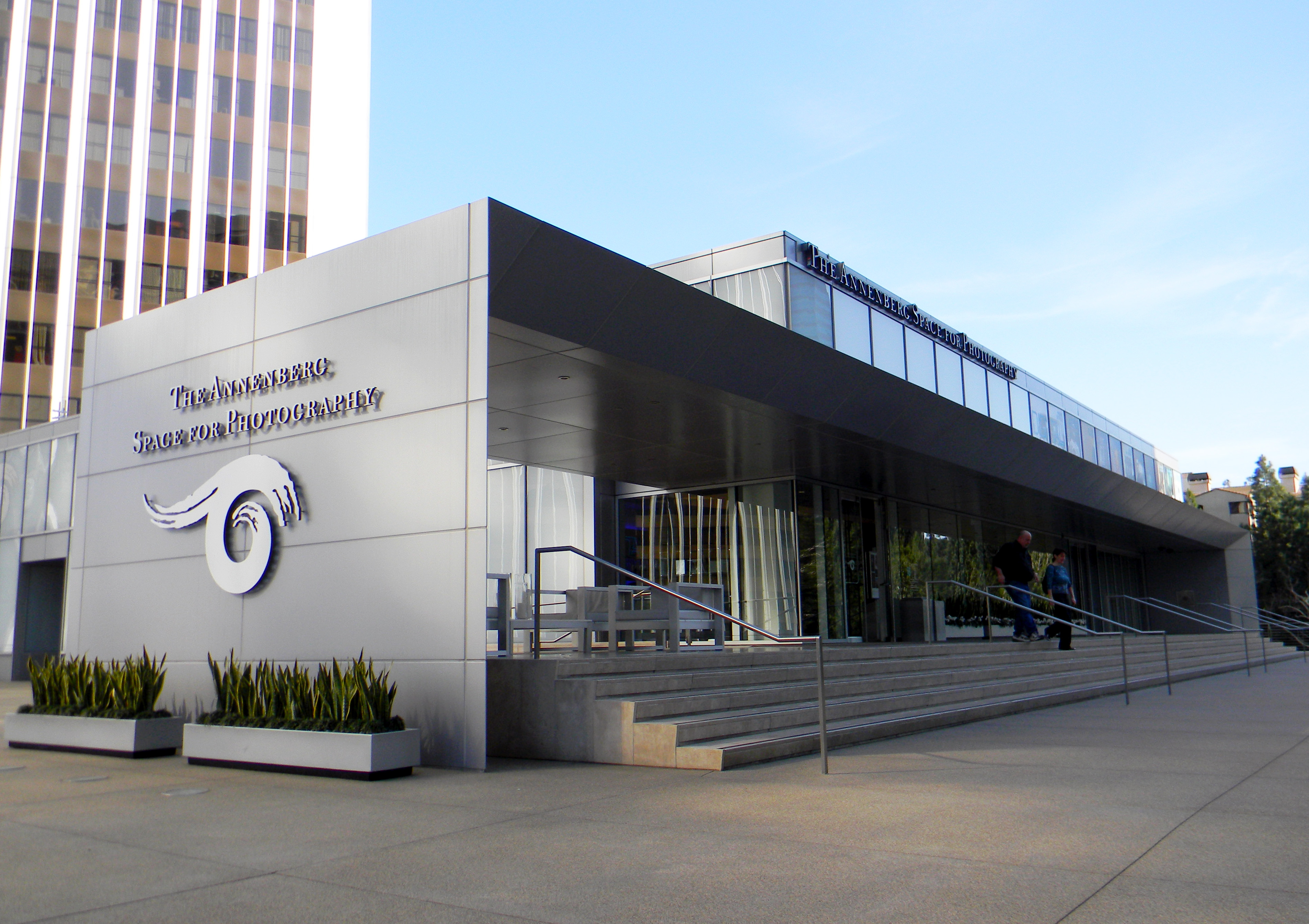 The Annenberg Space for Photography, which opened in 2009, is the first arts center in Los Angeles devoted strictly to the exhibition of photography and digital arts.

The Annenberg Space for Photography

Tucked between the enormous skyscrapers of Century City, the Annenberg Space for Photography seems an unlikely home for an arts venue ““ one only accessible after walking through a parking structure.

And while the polished, single-floor gallery space is hidden from street view, my visit through its doors was an eye-opening experience.

The Annenberg Space for Photography, which opened in 2009, is the first arts center in Los Angeles devoted strictly to the exhibition of photography and digital arts ““ a mission so deeply rooted in the center that the building’s very architecture mimics the shape of a convex lens within a camera, complete with an aperture ceiling design.

This flair for aesthetics is present throughout the technology-driven space. Photographs are displayed with premiere technology and are remarkable in their clarity. The glass screens used to display the works have thousands of pixels, a greater resolution than a BluRay disc, to project intense color nuances and details with precision.

Though the space carefully avoids labelling itself a museum, it is an educational center, complete with a digital video gallery and 3-D screening room, as well as a reading room for research and study.

The space’s current exhibition, “Digital Darkroom,” charts the recent history of photo manipulation, exploring the work of artists such as Jerry Uelsmann ““ a pioneer in film manipulation ““ to artists currently working with programs like Photoshop and Lightroom, high dynamic range lenses and 3-D photography to produce a range of remarkable digital effects.

The exhibition highlights the work of 17 photographers from the U.S., U.K. and France, each with his or her own personal style of alternative photographic practice.

The images are fanciful, other times haunting. But what I found most impressive was the incredible detail and process behind each artist’s work.

At first glance, French photographer Jean-FranÃ§ois Rauzier’s expansive “Versailles” is a staggering sea of white marble and brick. However, closer inspection reveals that it is the French palace of Versailles, photographed thousands of times and digitally stitched to create the image of an infinite structure. Iconic portraits of Marie Antoinette, French aristocracy and more modern images of Arabic sheikhs are hidden between balconies and pillars, in a kind of hide-and-seek for viewers.

Rauzier’s method, which he calls “hyperphoto,” involves taking thousands of photographs of every possible angle of subjects in a digitally assembled image. The elaborate technique produces startling clarity ““ capturing every shadow, pebble and blade of grass in images that are comprised of as many as 3.5 billion pixels upon completion.

Meanwhile, featured local Los Angeles photographer Brooke Shaden’s work is rooted in portraiture, often of herself, and commonly draws inspiration from Shakespeare and fantasy children’s stories. Recurring images of girls in billowy 19th century dresses and smoky, dark skies filter through much of her narrative-based photography that blends portraiture with Photoshop.

At 24 years old, Shaden is the youngest artist in the show, but is already an award-winning photographer. Her cinematic portrait of two running girls, “Running from the Wind,” was selected by director Ron Howard as one of eight winning photos used to inspire a short film sponsored by Canon’s Project Imagin8tion.

I found the show particularly interesting in that every artist featured in the current exhibition also speaks in a documentary screening within the gallery, allowing visitors to leave with an incredible respect and understanding for each photographer’s artistic process.

As photographer Uelsmann says in the film ““ “The camera is essentially a license to explore. If I have a hidden agenda, it is to amuse myself.” It’s an idea that is undeniably evident throughout the exhibition.

I found the Annenberg Space successful in sparking the imagination with work that was engaging without being overwhelming. And with $1 weekend parking, it’s easily my cheapest Los Angeles thrill to date.