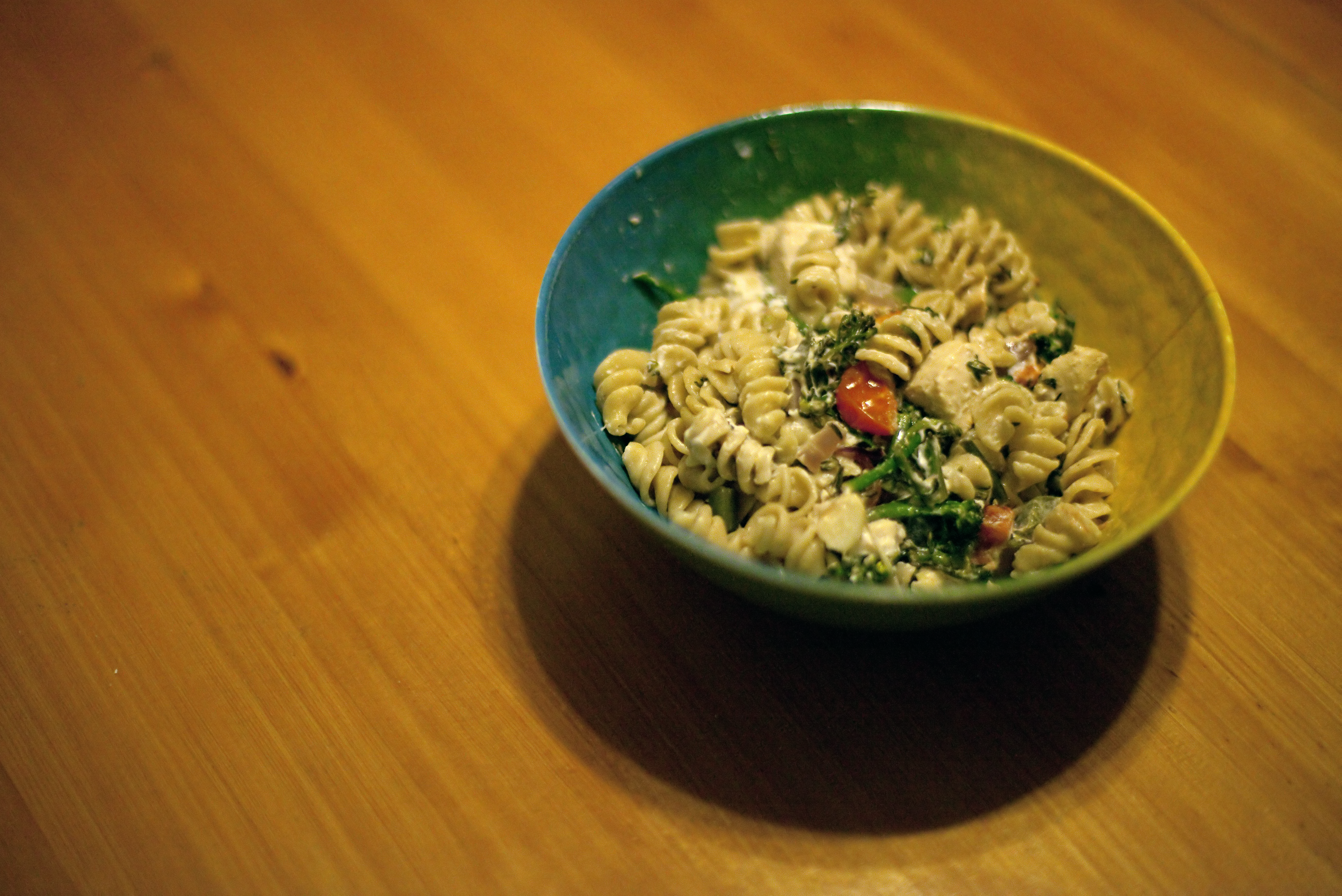 The finished Slow Food-style goat cheese pasta is a healthy, organic version of the traditional carbohydrate-based dish. The ingredients were conscientiously picked and were as locally grown as possible.

Directions
1.) Boil a big pot of salted water. Cook the pasta as indicated on the package.
2.) Cut the chicken into small pieces and saute it in olive oil with garlic over medium-low heat until cooked through.
3.) Take the chicken out of the pan and add a little more olive oil if it seems necessary.
4.) Add the chopped broccoli to the empty pan and cook for about 3 minutes.
5.) Add chopped onions, bell peppers and sugar plum tomatoes. Saute everything together for a few minutes until everything is tender.
6.) Add salt, pepper, red pepper flakes and optional lemon zest to taste.
7.) Drain the pasta when it is al dente and mix it in with chicken and vegetables and pour the goat cheese in. Mix well so that the cheese gets melted over everything.

Despite odd discussions about human cheese and fermented mushroom tea, the Slow Food Movement chapter at UCLA is not about culinary extremity. The movement is just about fresh ingredients and love, and I mean that in a non-hipster, non-hippie way.

This weekend I attended the first potluck of the just-launched Slow Food chapter at UCLA to learn what this lackadaisical meal trend is all about.

I got my reporter’s notebook, got ready for what I thought would be a hipster evening, went up the steps of Treehouse on Strathmore Avenue and saw a small group of people (six when I arrived, 13 by the time I left) sitting on the carpet around a coffee table decorated with various dishes.

It was the most relaxed club meeting I’ve ever attended.

There was a fresh baguette with artichoke and tofu dip, homemade pizza with heirloom tomatoes, a kale stew with kabocha squash, pear and spinach salad, plus strong homemade plum wine and lemon bars later on.

There was also a jar of kombucha (not related to the similarly-named squash) ““ a fermented tea which is made from the waste of mushroom-looking bacteria that expands to the size of its container and multiplies every month. The tea has reported antioxidative properties, but no one really drank it. It was more of a dinner conversation piece.

I learned that Slow Food is just the antithesis of fast food ““ the ingredients are conscientiously chosen and should be simple and as unprocessed and genetically unaltered as possible.

The three criteria of Slow Food are that it is good, meaning coming from healthy plants and animals; clean, meaning good for the environment; and fair, meaning accessible to everyone.

I try to buy organic and local anyway, so I may have been living the Slow Food lifestyle all along while scarfing down my food like a vacuum cleaner (Slow Food has nothing to do with speed of consumption).

An interesting conversation at the potluck was about the pros and cons of human cheese, in light of Manhattan chef Daniel Angerer who has been using his wife’s breast milk to create and sell the most natural, free-range dairy product possible, which he called “Mommy’s Milk.”

The idea is technically valid ““ it is certainly more environmentally friendly to use your own milk than a diseased cow’s, but the thought of solidified human lactose made me treasure bovine steroids as I breathed through my nausea. No human cheese was served at the potluck.

I wanted to compare Slow Food to my normal cooking, which didn’t turn out to be much different, just a bit more thoughtful.

The ingredients would have ideally been bought at a local farmer’s market, but because of time constraints, I just picked all of the parts conscientiously at Trader Joe’s.

Every ingredient was organic except the goat cheese, which was still produced locally in California. The pasta dish was uncomplicated. The ingredients can be taken out and substituted as needed ““ you just need a good vegetable mix.

Cooking it was easy ““ just boil the whole wheat pasta, cook the chicken, saute the vegetables and mix in the goat cheese. I normally wouldn’t use that much broccoli, but it worked well.

Looking back at it, I would have definitely used some heavier spices on the chicken, maybe paprika ““ it turned out a little bland, but nothing a little additional salt while serving didn’t fix. It tasted pretty much good, clean and fair.

Overall, I approve of the Slow Food Movement. I just wouldn’t take the all-organic idea as far as human cheese.

To learn more about the Slow Food chapter at UCLA, look for its group on Facebook.

“Fire in the Kitchen” runs every Thursday.